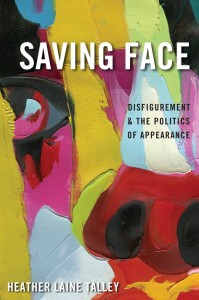 Saving Face: Disfigurement and the Politics of Appearance By Heather Laine Talley

In the twenty-first century, appearance matters seemingly more than ever before. At the same time that “looking good” drives cosmetic surgery consumption, the threat of looking different inspires biomedical interventions too.

Throughout, Talley demonstrates that facial appearance is increasingly attributed with life and death significance. Talley argues that as the significance of appearance shifts, the old boundaries between elective and reconstructive surgery are giving way. Especially at a time when aesthetic technologies carrying greater risk are emerging and when discrimination based on appearance is rampant, this important book challenges us to think critically about how we see the human face.

Available through local booksellers.
Read more in this Q&A with Heather Laine Talley