Dalit Women, Sexual Violence and the Geography of Caste: A Journey towards Liberation – An Interview with Asha Kowtal and Thenmozhi Soundararajan – The Feminist Wire

Home / Activism / Dalit Women, Sexual Violence and the Geography of Caste: A Journey towards Liberation – An Interview with Asha Kowtal and Thenmozhi Soundararajan

Dalit Women, Sexual Violence and the Geography of Caste: A Journey towards Liberation – An Interview with Asha Kowtal and Thenmozhi Soundararajan 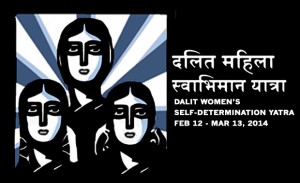 In 2012, the Haryana district in India witnessed a significant and historic moment in Dalit women’s movement.  Organized and led by Dalit women – the Dalit Mahila Garima Yatra (Dalit Women’s Dignity March) traveled to ten districts across the state of Haryana. The Yatra met with survivors, spoke to families and community groups, confronted police and district officials, throughout the journey. They organized awareness programs, street theater, held protests and discussions in villages across Haryana.

As a result of this process, the All Indian Dalit Mahila Adhikar Manch (AIDMAM) decided to launch the Dalit Mahila Swabhiman Yatra (Dalit Women’s Self-Determination March) in 2014 – a month long journey of Dalit activists across multiple states in India. From February to March 2014, the Dalit Mahila Swabhiman Yatra traveled hundreds of kilometers  – in Haryana, Utter Pradesh, Bihar, Chattishgarh, Maharashtra, Madhya Pradesh and finally – on March 12, 2014 – arrived at Jantar Mantar in Delhi for a public meeting.

On April 12th, 2014 – Asha Kowtal and Thenmozhi Soundararajan spoke at an event in New York City (organized by the South Asia Solidarity Initiative).  Asha Kowtal is the General Secretary of AIDMAM, a national campaign that launched the Yatra. Thenmozhi Soundararajan is a Dalit American activist, filmmaker and organizer. Both traveled across India on this historic tour with hundreds of Dalit women demanding justice and accountability for violence and oppression.

This interview is an edited transcript of a conversation with Asha Kowtal and Thenmozhi Soundararajan where they discuss the Dalit Mahila Swabhiman Yatra, the role of Dalit men within the movement, Savarna feminism, the mass mobilization triggered by Nirbhaya’s gang rape and murder, and finally sex work and caste.

Sonia J. Cheruvillil (SC):Can you talk about the thinking behind the Yatra? What you wanted to achieve? What were some of the challenges that came with organizing such a campaign?

Asha Kowtal (AK):  The challenges in 2012 were that we were not as well organized. But it just felt like a necessary step, something we had to do. We could not let it go. The Haryana yatra was such a powerful tool. For the first time, it was Dalit girls and women from the community leading this struggle. It was not a funded thing; no donors were there, no big academicians, no so-called experts. It was an organic uprising from the community, from the women – who were saying, “We have had enough, we are doing this so that our daughters will be safe, our sisters will not have to go through this. This has to end.”

We would go to different districts, and people would hear about us, about the yatra. And in the morning, there would be lines of survivors outside where we were lodged at night, waiting to meet us.  These were cases that were never reported. This was another challenge — we were not equipped to handle such a load at that time. So what we did then was say – “Yes, this is our yatra, this is for you, we are also from the community, come and join us.”

The yatra continues Dr. Ambedkar’s legacy by challenging perpetrators, caste, the state and institutions that were so biased.  Dr. Ambedkar’s last words were, “This is the caravan that I had brought so far – from here onwards – it is up to you to take it forward. So do all you can to take it forward, but don’t let it go back.”  Through our yatra, we educated, organized and agitated. We learned from our mothers and grandmothers; from the wealth of knowledge in the community; from each other. We learned from our hosts during our travels – from the Ravidasi community, from temples or ashrams or someone’s home where we might be staying. We were educating ourselves, organizing ourselves. No one was teaching us.

Thenmozhi Soundararajan (TS):  There are two key concepts within the yatra – one of being Dalit and the other of self-respect.  Caste is enforced through women’s bodies and therefore, the end of victimhood begins with the assertion of survivorship and political identity. The idea of self-respect goes to the core of what the act of rape is meant to do. It is meant to dehumanize, to destroy the unit of the Dalit family and humiliate the community for the gall of wanting to assert a Dalit civic presence in society.

Dalit women’s bodies have historically been porous to those who have power. The geography of caste is in the bodies of the women. For one example, with many agricultural workers, the agreement with the landowners will be that they will also have access to the women. In the south, if you are a bonded laborer; the landlord sleeps with your wife first on the wedding night. There’s a saying among Jats, “You have not really experienced the land, until you have experienced the Dalit women.”

Going back to the idea of being Dalit – Dalit is this idea that we’ve been broken, but that we are surviving and fighting to thrive. And so – in many ways – the cards were stacked against this campaign from the beginning.  And yet the process of the yatra is a quickening – in which every step forward – we are crossing the divide of poverty, of communal tension.  It’s very easy to sit in a Delhi, AC office and theorize about what needs to happen. It is much different to sit in that village, with that survivor, and sit shoulder to shoulder and build a campaign. What is so amazing about AIDMAN’s work is that the strategy does not come out of Delhi. They have made the road by walking it. The great civil rights movements of our times have been journey movements. The idea that liberation comes from moving forward – whether it is apartheid or the American civil rights struggle.  Even if no other part of Indian society respects Dalit women – our movement puts us on the map internationally with the great civil rights movements of our time.

SC: You met with the police, the District Commissioner and other officials during both the yatras. What were those conversations like?

AK:  Most of the time they were very dismissive. They would say they had “done everything, all the investigations are going on, who are you to ask?” Or they would say, “Okay, yes, yes – we will forward it to the CM, or the other concerned authority. Thank you very much, you may go.”  In other places, they refused to even meet us. So then, we would wait for many hours  – all of us, shouting slogans, picketing in front of their offices.  And the officials would just go out the back door. There was one district where they ordered a police lathi charge on us because we had blocked a car that was trying to leave without meeting us.  The police tore our kurtas – it was really bad.  We then called the National Commission for Women and kept up the protest till evening and finally someone would meet us. So we had all these challenges in even meeting these people.

SC: Can you talk about Dalit men and the role they have played in the Yatra, and within the larger movement?

AK:  In the yatra context, we had about 5 to 8 girls and about 5 to 8 boys from the community—without whom we could not have done it. Many of these villages were not safe for us. When we would enter, the (Jat) men would say to us, “Go back, you don’t need to be here. Everything is fine. All our girls are fine. And we don’t want our girls to even meet you people.”  We were going into these highly feudal, Jat-dominated areas of Haryana. We had to leave some places because we literally feared for our lives.

TS:  They (Dalit men in the yatra) supported the women without taking up space. They would hold the bullhorn for the women to speak; they would pack and unpack things; whatever needs the women had they were there for them.

People have this image – whenever you bring up caste-based sexual violence — almost always Savarna feminists will say, “There’s such a great deal of domestic violence from Dalit men.” Dalits are portrayed as inherently violent. And while there is no question that there is domestic violence – it cuts across all of India. The reality is that Dalit men and women have been in the trenches together for a long time facing caste oppression.  So during the yatra, you could see the tenderness from these fathers, these brothers, these sons. Their pain of knowing that they could not protect their women in these environments, in these very targeted and humiliating forms of violence. That came out in the way that they behaved so strongly; so compassionately throughout the yatra.  Even though – this is the Dalit Women’s Self-Determination Yatra – it is actually the entire community that was part of the Yatra.

AK:   (One of the community organizers – Manisha) would say, “Are we all mad? That we go from village to village; from street to street; when people are looking at us and laughing and smiling. What has made us come here like this? What has made our uncles, brothers and fathers to come here?”

Do you see any Brahmin boy here protesting for his daughter or his sister? Would you find a Jat man doing this kind of protest?  A mother was on stage, shouting, “Jai Bhim Zindabad! My daughter Zindabad!”  I cannot think of any other community recognizing their daughters so fully.

During the tribunal [The tribunal was part of the campaign; but separate from the yatra] – all the fathers and uncles were standing in line, holding all the files, the medical reports, the FIRs. They were waiting to speak to the jury members.

In one case – Ranjudevi’s case – a Dalit woman was stripped and paraded naked in a village. We asked her where her husband had been. And she said, “Of course, he was in the field. And what could he do? We sat together and shed tears together every night.  If this was a Jat or a Yadav – there would be swords and guns in the village. But with us, we are untouchables.”  (The husband) was also tormented by the powerful caste structure of that village. 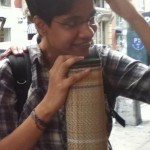 Sonia J. Cheruvillil is part of the organizing collective of the South Asia Solidarity Initiative (SASI). She lives in (Brooklyn) New York City.