We Need More Than Pink Cleats – The Feminist Wire

We Need More Than Pink Cleats 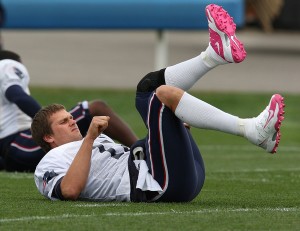 Every October the NFL, in partnership with the American Cancer Society, adorns itself in pink to raise awareness about and funds for breast cancer.  Via their NFL Pink website, the league encourages women to make a “crucial catch” and to know that “annual screening saves lives.” Amidst these messages are videos and stories of women who are currently enmeshed in the fight against the disease.  The implicit message here is that the NFL recognizes its female fan-base and appears to be dedicated to a cause that might impact a significant number of their lives.  Despite recent criticism that the NFL profits from their Pink campaign, the visual spectacle resulting from the NFL’s use of pink cleats, towels, and goal posts is impressive.

And yet these efforts do nothing to assuage my increasing disgust with the league and the androcentricity that governs U.S. professional sports in general.  Several recent issues involving current and former NFL players have left me watching sports television less and less.  And this is quite a feat, because I have loved sports my whole life.  From watching every game played by Jordan’s Bulls from 1991-1998, to the White Sox’s World Series win in 2005, the Blackhawks current reign as NHL champions, and the newly revamped Bears offense- I know my sports, I love my sports, and I love my Chicago teams.  But the thing that is driving my growing contempt is their refusal to deal with issues of violence, masculinity-as-violence, misogyny, hyper-sexualization of women, rape culture, and countless others issues, which are part of a culture that consistently puts women in danger.  Their steadfast support or patent silence on situations where current and former players have molested, abused, raped, and even killed women is alarming.

In February of this year, Baltimore Ravens star running back Ray Rice was caught on video dragging the limp body of his girlfriend Janay Palmer from an elevator.  The image alone is deeply disturbing, including the way that this 200+ lb man who runs through 300 lb defensive lineman weekly seemingly refuses to pick Palmer up to exit the elevator.  Instead he drags her like a sack.  Even more disturbing are the accusations that Rice punched Palmer out cold immediately prior to the images captured on tape.  In late March, Rice was indicted on third degree aggravated assault charges. Reports about Rice were met with denial, dismissal, and disregard for the broader issues.  Whether isolating, imagining Rice as an isolated case, dismissing its representative importance, and denying the cultural and institutional context, the NFL and its corporate partners do little to take responsibility.  They are not busy shopping for the new pink towels.

Time and time again in late 2013, the sexual assault allegations against Florida State quarterback Jameis Winston were only covered to the extent that the case would hamper his chances to win the Heisman.  Interestingly, a press conference was called less than a week prior to Heisman voting to announce that Winston would not be charged.  The level of banter surrounding the press conference was inappropriate and sickening.

Issues of sexual violence have also caused me to give the NFL the side eye.”  Recent NFL network analyst and former Super Bowl champion Darren Sharper has been charged with multiple counts of sexual assault in several states across the country.  I have yet to see this story reported, much less analyzed, on any of the major sports networks.  In fact, many on-air sports personalities have stated that they would not have discussed the Ray Rice allegations had it not affected his on-the-field prospects.  Although they are very careful to say that the allegations are the more serious topic, the hypocrisy and complicity here are disconcerting. Are we really to believe that Sharper’s spree as a serial rapist who drugs and assaults women began after he retired from the NFL, as news outlets suggest?  It would not be outrageous to consider an NFL cover-up.  Take for example the lack of response or discipline for former Miami Dolphins offensive lineman Richie Incognito.  In 2012, he was accused of sexually molesting a female team volunteer with a golf club at a Dolphins fundraiser in full view of team officials.  According to the police report,  Miami Dolphins personnel told the women that the situation would be “taken care of.”  It never was.  Incognito was never charged or disciplined.  However, in 2013 Incognito was publicly decried for his racist harassment of black teammate Jonathan Martin (calling him a “nigga”) and a Japanese team trainer.  In fact, the racial harassment investigation is the only way the sexual molestation allegation saw the light of day.

In a recent discussion the use of the word “nigga” among football players, ESPN on-air personalities Mike Greenberg and Mike Golic invited NFL Hall of Famer Cris Carter to appear on their “Mike & Mike” morning show.  Greenberg described Carter’s stance on the subject as impassioned and positive, and referenced a story that Carter told about the use of “nigga” among the high school players that he coaches.  Carter described a moment when he overheard two of his players using the word while lifting weights.  Carter instantly steps in and demands that they stop using it, noting his preference for their using “MFer” or a “SOB” instead.  Seemingly erasing their misogynistic orientation, the preference for using  “motherfucker” and a “son of bitch” is telling.  It reveals how yet against conversations about justice and equality remains at surfaced level, and that of individual transformation.  It reveals the adherence to symbolic change, to the spectacle of progress, in absence of any efforts to transform in addressing the roots and cultural production of injustice.

How does the NFL through its Pink campaign claim to care about the lives of women, but does not see fit to address the danger that its own players pose to women?  How are several highly popular sports shows, who congratulate themselves for being cutting edge (I’m talking about you Skip Bayless and Stephen A. Smith), fearless in addressing issues of race (most recently the NFL’s proposed ban on the use of “nigga” on field), but are silent on intimate partner violence and sexual assault?  Does the NFL only care about the lives of women when it is lives that are threatened by the invisible killers like cancer?  Do sports analysts only care to delve into intimate partner and sexual violence among athletes when it impacts their performance on the field

or court?  To me, the answers are yes and yes.

If the NFL really wants to reach out to its female fan-base, they should demonstrate the importance of saving women’s lives by disciplining your own players when they assault women rather than pledging undying support for them, as the Baltimore Ravens recently did for Ray Rice.  We need more than pink cleats. 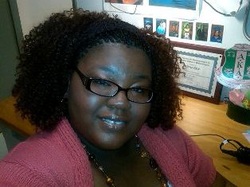 Kiana Cox is Ph.D candidate in sociology at the University of Illinois at Chicago. This fall, she will be Assistant Professor of Sociology at Southern Illinois University Edwardsville. She is a scholar of gender and black feminism, intersectionality, African American politics and social movements, and popular culture. In her leisure time, she enjoys watching and attending sporting events as well as sports television and talk radio. To learn more about her and to view her new sports blog, visit her website at kianacox.com.