Glenn McConnell and the College of Charleston: Hidden Histories and the Confederate Imagery – The Feminist Wire

Home / Academia / Glenn McConnell and the College of Charleston: Hidden Histories and the Confederate Imagery

Glenn McConnell and the College of Charleston: Hidden Histories and the Confederate Imagery 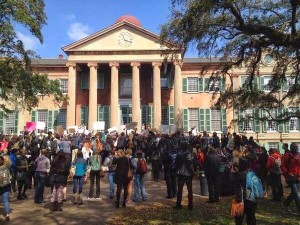 Protests at the College of Charleston. From Professor Alison Piepmeier’s blog: http://alisonpiepmeier.blogspot.com/.

South Carolina’s history as a former Confederate state engenders both resistance and refractory nostalgia. The recent decision to appoint Glenn McConnell as president of College of Charleston, a man known to wear a Confederate uniform, has sparked students, faculty, and staff to confront the state’s past support for slavery. It has pushed the school and city’s racial history into spotlight, raising questions about the continued role of slavery in state and academic affairs. 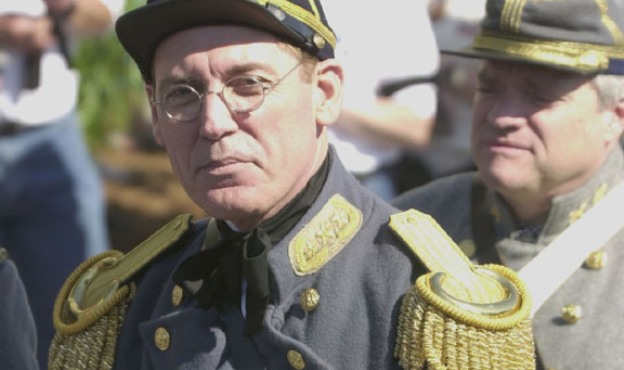 Conservative legislative interests, neoliberal politics, and the pursuit of financial rather than educational goals framed the lengthy search process, which culminated in the Board of Trustees naming Lt. Governor Glenn McConnell president of the College. Despite having ZERO background as an academic leader and the fact that the search committee choose several others, who they deemed to be more qualified candidates as finalists for the position, the Board selected McConnell to lead the College.

Over 2,000 individuals signed petitions against McConnell and a number of students, faculty, and members of the Charleston community protested McConnell’s candidacy before the search concluded. Students and faculty claimed that McConnell was dismissive of their concerns about racial and LGBTQ exclusion on campus and within South Carolina. Yet, the board chose McConnell. It should disturb us that the board foisted McConnell onto a community who objects to his presidency. Again and again, the voices of the students, faculty, and staff at the College are not being taken seriously as builders and sustainers of their own academic community. However, this is not the only reason that I want to talk about Glenn McConnell.

McConnell’s connection to Confederate imagery continues the long-standing practice of sanitizing the South’s history of profiting from systems of slavery and racial marginalization. In addition to sometimes appearing in a Confederate uniform, McConnell has owned a business that sold Confederate flags and other memorabilia. In one widely-circulated photo of McConnell, he is seen attending an event called “a Southern Experience,” where he is dressed in Confederate battle garb, standing alongside two actors from the Gullah community.  For many, this scene evoked memories of slavery.

I do not object to exploring and memorializing the past—in fact, I think that doing so is paramount to understanding and changing a variety of issues that are ongoing in the South. It is how and why McConnell promotes these images that is the problem, and what it represents to the community of the College, the city of Charleston, and beyond.

I was born and raised in South Carolina. For much of my life, I have listened to conversations describing Confederate imagery as “heritage” in an attempt to decouple it from histories of slavery and Jim Crow. With the choice of McConnell, these discourses come to the forefront yet again, and I want to intervene by discussing what remains hidden in the celebration of Confederate imagery. The practices of promoting Civil War memorabilia, plantation museums, and glorification of a specific notion of Southern culture must be considered in the context of the historical periods in which they emerged. The longing for the “Old South” began during Reconstruction, when both Southern and national media’s denigrating portrayals focused on newly emancipated African Americans as chaotic and violent—suggesting that these populations required the restrictions of slavery to function. By the early 20th century, the South’s move toward Jim Crow law was supported by images that presented the antebellum period as a halcyon time in which genteel manners and gracious living characterized the white population and a firm knowledge of “place” (i.e., inferiority, characterized the black population). As Tara McPherson notes, it is no surprise that popular mainstays of Southern culture such as the novel and film Gone With the Wind gained prominence as the New South longed for a time in which white supremacy was accepted legally and culturally. Defining the antebellum period as a time of order for the enslaved, and defining their relationships with whites as benign and familial, grossly misrepresents the sometimes mundane and sometimes spectacular systems of violence under which enslaved people lived.  This nostalgia for an imagined Old South peaked during Southern resistance to the Civil Rights movement.  Because of the movement’s challenge to white supremacy, Southern states began to incorporate Confederate imagery into their public personas as symbolic of their opposition to changes in the racial paradigm, especially integration. The image of McConnell in his uniform cannot be separated from this past.

McConnell’s invocation of the Confederate South also cannot be separated from the present situation of the College or the history of the city of Charleston. The College of Charleston has been, for most of its history, an exclusively white institution. Though integrated since 1967, only 6% of its undergraduate students and 5% of faculty are African American, highlighting a persistent inequality as African Americans make up 28% of the state’s population. The College is located in the city that was the site of the first battle of the Civil War, in the state that first seceded. The city is beautiful, but its beauty and its historic prosperity were largely derived from the labor of enslaved persons, from the violence and degradation of white supremacy. The system of chattel slavery reduced human beings to property, making them legal non-persons. While slave law was often decided at a common law level, South Carolina was one of many states in which legal penalties for whites who injured, killed, or raped the enslaved were low to non-existent. South Carolina’s “Negro Act of 1740”

allowed whites to kill “rebellious” slaves without punishment and also explicitly legalized whipping and beating the enslaved. Slave owners were rarely held liable for violence against their own slaves, and in some cases South Carolina courts issued only fines or overturned the verdicts of whites who were accused of killing slaves (see for example State v. Fleming, 1848). Legally, the enslaved were not persons but property, not citizens but producers of profit for the benefit of others. This is the Southern history McConnell’s imagery silences; the images that he and others seek to celebrate in the name of tradition sanitizes a history of profit-making through dehumanization and violence, worthy of condemnation and reflection not celebration and smiles.

McConnell has responded to questions about his connections to Confederate imagery by arguing that he is celebrating Southern history and culture. T

his discourse positions the use of Confederate imagery as symbolic of heritage and states’ rights. This line of thought obscures the linkages between the rhetoric of states’ rights and the claim of rights to slave ownership under state sovereignty, advanced clearly in South Carolina’s own declaration of secession and in the constitution of the Confederacy. Both of the re-enactors McConnell was pictured with have stated that they were not representing enslaved persons, but the image still evoked connotations of slavery, especially when pictured alongside McConnell in his Confederate uniform. Some have defended McConnell, arguing that the controversy over his connections to Confederate imagery is overshadowing his achievements.

All that being said, images matter. University presidents, like other powerful leaders, have both pragmatic and symbolic power. On a symbolic level, these images of McConnell suggest that he is concerned with promoting an image of Southern history that marginalizes the horrors of slavery. Perhaps Lt. McConnell has also had a chance to visit the Avery Research Center archives at the College of Charleston. Among their collections are manacles used to transport and imprison the enslaved. Some of those manacles are awfully small—they force one to wonder whether they were intended for a small adult or a child. This was also part of the “Southern experience.” There is nothing to celebrate or smile about here, either.

The images of McConnell alongside Confederate flags and in Confederate uniforms promote a version of history that hides the legal and social violence of slavery and instead celebrates a fictional, idyllic Southern past. McConnell brings that image with him as he assumes leadership of an institution that is not far removed from segregation and that still struggles to recruit and retain African American students. The choice of McConnell sends the message that the Board of Trustees is not interested in listening to the constituency who is most influenced by this decision. It suggests that they are unconcerned about creating a campus committed to racial equality and where students of color can feel welcome and supported. On a national scale it signifies that the College and the state have yet to fully confront the painful and violent histories of slavery and Jim Crow. These histories deserve memory, attention, and voice, not elision.

On March 24, hundreds of students, faculty, and staff took to the College’s historic cistern to speak their opposition to McConnell’s presidency. Since then, students have conducted sit-ins, walkouts, and rallies in an attempt to reclaim their school. Make no mistake: these students are engaging in an act of love for their college and their community.  It is crucial to recognize how universities can and must be critical staging grounds for creating more just communities; as sites of exclusion and violence, especially for people of color, these spaces must be contested at both the symbolic and material levels.

As James Baldwin wrote of love: “if the word integration means anything, this is what it means: that we, with love, shall force our brothers to see themselves as they are, to cease fleeing from reality and begin to change it. For this is your home, my friend, do not be driven from it….” These students represent the process of confronting the past and using it to change the present. They may be forced to pursue this project under leadership that makes invisible precisely the problems they must address. In support of their actions, I ask them to always remember: the College is your home, do not be driven from it, but make it what it must become.

For those interested in reading more about the ongoing protests at the College of Charleston, please visit:

Gay Faces/Gay Places tumblr at http://gayfacesgayplaces.tumblr.com/ (a project of Southerners On New Ground); 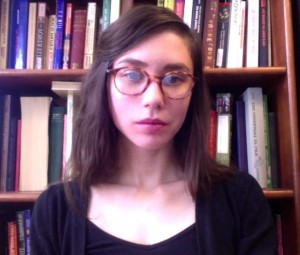 Jamie Huff is a 2007 graduate of the College of Charleston. She earned her PhD in Political Science at the University of Connecticut, and in the fall she joins the faculty of Bridgewater State University (Massachusetts) as an assistant professor of Criminal Justice. Her dissertation, On Southern Soil: Fiction, Identity, Violence, and the Law, focuses on the experiences of marginalized women within the legal and social systems of the U.S. South.