Racism, Sexism, and the Myth of the “Confidence Gap” – The Feminist Wire

Home / Culture / Racism, Sexism, and the Myth of the “Confidence Gap”

Racism, Sexism, and the Myth of the “Confidence Gap”

Last year Sheryl Sandberg told women to “lean in.”  This year Katty Kay and Claire Shipman are telling women worldwide to “stand tall.”  As reporters for ABC News and BBC World News, they began theorizing why women remain less successful than their testosterone-addled counterparts.  Their findings?  “Men don’t let their doubts stop them as often as women do.”  Indeed, Kay and Shipman’s article “The Confidence Gap,” published in The Atlantic, identifies an absence of confidence endemic to women as the primary reason female achievement trails that of their male counterparts.

The authors portray a chronic lack of confidence amongst women who, despite their competence, are curiously unable to ascend the professional ladder.  Regardless of our profound desire to move up the ranks of social hierarchy, a combination of “factors, ranging from upbringing to biology,” inhibit women who are otherwise qualified from breaking the much-harangued glass ceiling.

Kay and Shipman fail to consider crucial factors inhibiting women’s success in the workplace.  Moreover, the implications of their article are worrisome at best and egregious at worst.

At Jezebel.com, Tracy Moore offered a powerful indictment of the thesis promulgated by Kay and Shipman. Moore lambasted “the confidence gap” as “feminist bootstrapping” and another example of the valuation of conventional masculinity over femininity. 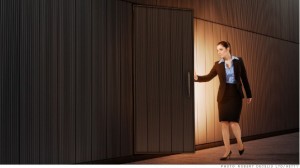 However, Moore misses an important opportunity to bring race into the conversation.  Race and gender are markedly different forms of marginalization, but the comparison is helpful because biological and social ideas of race and gender have used to justify inequality throughout history; Kay and Shipman have good company.  So, how would their argument fare if it they were discussing race instead of gender?

Years ago, scholars debunked the argument that race has anything to do with intellectual capacity.  Their work was so thorough that James Watson, who discovered DNA, ended his career in disgrace for claiming Africans were genetically inclined toward intellectual inferiority.  More recently, a video of Neil DeGrasse Tyson Tyson refuting Larry Summer’s 2005 claim that innate differences are a contributing factor to the absence of women in the sciences has gone viral

Tyson draws upon his experience as a Black man in the sciences because of what he calls “similar issues around access to equal opportunity in white male dominated society.”  Tyson further asserts how he has consistently encountered insurmountable resistance and that the “forces of society prevented [his scientific achievement] at every turn” because his interest in being a leading scientist was “outside the paradigm of expectation.”  Tyson bridges race and gender to illustrate both the absurdity of biological claims to workplace inferiority and the importance of examining such claims intersectionally.  Articles like Kay and Shipman’s—which conspicuously omit race and class in their conversation about gender—highlight how easy it can be to attribute institutional barriers to individual actions.

The confidence gap ensnares female under-accomplishment in a biologically and socially determined “culture of poverty” argument, denying how assumptions about race, like those about gender, continue to bleed into structural marginalization.  Last year, the U.S. Department of Housing and Urban Development (H.U.D) released a study that found “real estate agents and rental housing providers recommend and show fewer available homes and apartments to minority families, thereby increasing their costs and restricting their housing options.”

The H.U.D study illustrates that despite identical qualifications and perhaps identical levels of confidence, there are structural consequences to the bodies in which we reside.. Encouraging women to simply “speak up”, and thus out of sexism negates some vital facts.  Although women generally earn “77 cents for every dollar the average white male makes, black women and Hispanic women only make 70 cents and 61 cents, respectively” and “women of color . . . face greater occupational segmentation, even lower wages, and punishingly higher rates of unemployment than white women.”

But Kay and Shipman supply yet another neoliberal fantasy that ignores how race and gender oppression structure our lives.  Instead they ask us to see empowerment and change through culture, personal choices, and individual transformation.

Difference on its own need not be problematic, but the normative interpretation of difference is a dubious undertaking.  Kay and Shipman apply a dangerous logic of choice to structural marginalization ignoring race and thereby leaving readers with the distinct impression that we can alter institutional barriers by simply making better decisions in the workplace.  When we apply the confidence gap to women of color who are even less present in the corporate elite than the Marissa Mayers of the world, we’re left wondering whether our absence is due to our own personal failures to overcome crippling levels of biologically determined and socially created self-doubt instead of the pervasive violence and incarceration in our communities.  Indeed, if we focus on “not letting our doubts stop us” as Katty Kay and Claire Shipman advocate, we will be viciously blind to the ways racism and sexism do. ______________________________________________________________

Kim Tran is a graduate student and teacher in the Ethnic Studies Department at the University of California, Berkeley where she studies diaspora, gender, race and political economy. Her writing has appeared in East Bay Express, The Feminist Wire, Role/Re-Boot and Nation of Change. Her additional work can be found at www.kimtranpoetry.com