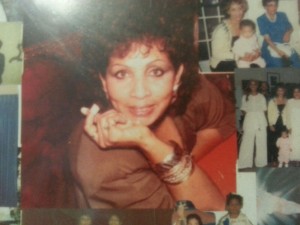 We played Monopoly and I feared the end of the world. This was when Y2K was a thing and I was still jealous of my friends for being members of a club I named in my imagination—the five-foot club. I hated the smallness I felt being short.

Midnight approached and the dense, shapeless maw of the apocalypse sucked me in, a big black hole spaghettifying me, and spilling out my many everythings over my mind’s cosmos. My mother, D’Juana, and father, John—I’m the third—had gone out that night to another of his work functions and wouldn’t be back until I’d knocked out. I like to imagine that my mom walked in the door laughing her laugh, smiling her smile, doing the little dances she sometimes did and does, and that my dad came in with his eyes crinkled by the smile that’s part and parcel of my inheritance.

Joshua, my younger brother, my best friend for all of time, bed buddies for years, his big eyes with gold soul humming behind every gaze, Midas to every thought, sat across from me on the living room floor, insulted by something I said about adding up the rainbow dollars fast enough—I was like that back then. His eyes look through and with something else, something deep and large, and I might have been jealous.

They weren’t looking at me, either pair, but I know they saw me—they didn’t need to look to see. The wisdom of the blue-green eyes eyeing the blue-blue Boardwalk and Park Place, and the green-green of rent collections to come; the big browns, spaced, or in space, somewhere else, looking at the gray-green of the Christmas tree we could probably barely afford.

Jeremiah is a blur. The youngest, with his inexplicable New York accent that the teachers at school sent him to speech instructors to try to correct, even though I always understood him just fine and always thought—or knew, in my own arrogant kind of way—that I was smarter than the ladies with the bad perfume who shifted year-to-year between bitter and saccharine. He was somewhere, probably asleep. Too little to be up playing games that’d encroach on his laugher’s freedom, the kind that bore big white incisors that make the moon of his smile light these kinds of nights certain kinds of ways. Ways that escape words, shift their tides and currents. Some

thing, present
gifted in the small spaces between teeth and
the goofy accent inflecting
all his joy

—yeah, he was somewhere, always,
the echo of the last time he laughed that day
blurring his presence
across the faded and probably

confabulated memory of New Year’s Eve 1-9-9-9, those moments before the ball-drop would usher in paradigm shifts and different kinds of looking and laughing.

She laughed when I asked her. That honest laugh that cut and healed at the same time, that sent sonic ripples through time and space, bent them. Sends; bends. A long
cackle opening up into
some hee-hee-hee-hees coated
in a Texas kind of twang I
couldn’t imitate if I wanted to—
I don’t.

But she laughed then, like she would, like I would, if someone asked me about Y2K and the world ending; she laughed a laugh aimed at cutting the possibility of an end her eyes could not and would not give meaning to by seeing.

“That’s foolish,” she said. “China’s still there. No one’s saying anything about China sinking into the ocean.” She didn’t even look at me when she dropped the four goldenrod hundreds for Boardwalk and cackled again, twang twanging, counting her fortune, anticipating more to come.

It’s that laugh that sticks to the insides of ribs like the good food only grandmothers can cook and cackle up. A laugh that warps facial physics to bare big white teeth and close eyes that look, look like they stayed looking when they shut.

My mother fainted, or near-fainted, on the way from the pew to see those eyes closed in West Angeles’ old chapel. They weren’t looking

Like—I mean it was just that Tuesday—or maybe not
I know it was raining and how
Raindrops magnify and blur the windows and portals through
Which I’m looking, now,
Like

Her, through time and space and life and death. I remember the phone ringing with an ugliness against the pitter patter, a dark electric jazz with us on stage, two trumpeters—Jeremiah and I—a soprano sax—Josh, because his voice carried and carries like no one else’s—and the beautiful songstress—Mom—in tension with the falling rhythm, the rhythmic falling, outside and everywhere.

We’d been living in transit, the four of us—Mom, Josh, Jeremiah, me. Dad continued working because the green-green of money never looked back into our eyes, never saw us, couldn’t see us, though we couldn’t unsee it, or stop looking—how it always goes; had to keep it moving. Hours in traffic between Cerritos and Torrance to meet my aunt, VeRitta, at the hospital for more news, another treatment, something, every day, after school, piled in the Honda Odyssey, listening to Yolanda Adams on a CD the whole way, numb and hungry. We’d always stop for tacos from this place about five minutes from this new home, usually sneaking my grandmother a few with pickled jalapeños my mom grabbed from the fridge at home and wrapped in foil so she wouldn’t get any juice in her favorite purse.

The doctor told my grandmother her she couldn’t or shouldn’t be eating these things, but she knew what she wanted. She’d laugh, less twang, now, when my mom pulled out the pickled peppers and smuggled her two or three fish tacos to put them on.

Stage 4, at the time. My mother, her sister, their brothers, and sometimes my father—they’d meet at the taco place or converge in the waiting room, sharing hushed worry laced with words that sounded ugly; I only remember the ugliness of their sound, not the fatal shapes of their glyphs. Breast cancer metastasized language, distended words with a malignant tumescence that I’ve long since surgically removed from my imagination. I think.

So grown lips moved and talked ugly in the fluorescent and encroaching white of dying. A night in the ICU, when we took up the whole waiting room, hunched over, curled up, in the hush, and all I can remember is the thought of an apocalypse approaching, opening its maw again; a solar system on the event horizon of gravitational obliteration, swept up in the warp and pull of a dark singularity unspeakable—but we all felt its name on the tips of our tongues, or felt ourselves on the tip of its. I thought of planetary titans, worlds, ending; I thought of eyes closed. And I inhabited the laughless hush absent the lavishness of twang twanging honesty; so I hoped she was laying in a lie.

But the rhythm of falling set the backdrop to that Tuesday, our instruments gripped tight and at the ready. Sweaty palms; drummer in my chest dropped his sticks when the phone rang.

When worlds end and eyes close
When hush encloses what laughter speaks
Rain reigns,
And the beautiful singer wails
And faints
Or near-faints
All our eyes looking
Like

Brenda Smith loved Chinatown in Downtown LA. She made friends with a shop owner who sold her herbal remedies, teas, little bottles of pungent ginseng, all of which she brought back to my house and shared, usually in the company of fried catfish and green-green gifts like she always did. Sometimes she would sit and read old books with blank covers cross-legged on the couch; sometimes she would stretch out her legs and meditate for hours, eyes shut but still seeing. Others, she would laugh at Kenan and Kel with tears raining down her cheeks—there was this one scene with an old black lady trying to buy apples from Rigby’s and Kenan tries to help her out, and—

She was always there.

A few years ago, when my aunt needed to move out of Brenda’s old house in Palos Verdes, we all sifted through dusty books and glass paperweights for that laughter and those eyes. I found an orange book with a blank cover on top of a stack just after clearing a shelf from the bookshelf in her old office. Some eyes opened somewhere, some big white teeth shifted the tides in me.

I took it with me back to my apartment in Irvine before being moved to open it. It was a long, small-print-large-page type of book on holistic medicine. I tried to change the color of my eyes while I flipped through section after section, passing diagrams, and picking up and dropping words and phrases along the way. A folded envelope with a piece of paper from a legal pad irrupted into view. A letter; her writing.

I don’t remember the words, but they weren’t ugly. I remember reading them next to Chinyere on the couch in my living room, surrounded by white walls and drowned in the fluorescence of white light, tinged with a bit of sunset spilling in through the back door.

There are days when my eyes change colors
Looking
Like

The “hold on, hold on,
Let me show you guys some moves”
Of my dad popping and locking in the kitchen
With crinkled eyes

And me
The days my eyes change colors,
Looking like

A paradigm shift,
A new kind of looking and laughing
Other worlds
Tinted by those eyes and that laughter 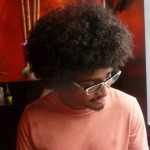 John Murillo is a second year Ph.D. student at Brown University in the English department.  His research interests include theoretical physics, critical theory, afro-pessimism, cognitive neuroscience, and literary theory. He reads comic books often, and is currently working on a novel entitled Dark Matter, building from his short piece, “Black Spaghetti.” He also runs Out of Nowhere, a blog space for black thought, with Nicholas Brady, its founder.