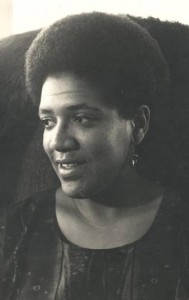 The modern Black feminist movement was percolating when I was a child and I hardly knew it. Looking back all the signs were there—the hugely popular paperback book, The Black Woman, edited by Toni Cade Bambara sat on kitchen tables and nightstands. My mother, Joan Sandler, a pioneering African American arts administrator who grew up in Harlem, exposed my sister Eve and I to a steady stream of activists, artists, and writers, some of whom became central figures in the evolving Black feminist movement. One of them was her girlhood friend Audre Lorde.

Audre and my mother were left-wing bohemian Black girls from Harlem who became lifelong friends in the late 1940s. They met through their mutual friend Genevieve Johnson, a dancer, who tragically ended her life at the age of fifteen. At Genevieve’s funeral the two of them vowed to remain friends forever and they did.  My mother often took me to her poetry readings as a child and I loved her work.

Briefly, we were with Audre in Lagos, Nigeria in 1977 for Festac 77, the World Festival of Black Arts.  My mother worked as the North American Coordinator of Artists in exchange for airfare and room and board for her two teenage daughters. It was a life changing experience for us. Audre was of course one of the invited artists. She would later profile my parents, Joan and Alvin Sandler, in her biomythography entitled Zami: A New Spelling of My Name through the fictionalized names “Jean” and “Alf.”  I had no clue until many years later that Audre was a major Black lesbian feminist theorist whose work would inform my own so deeply.

In the early 1990s I was completing A Question of Color my PBS documentary film on attitudes about skin color, hair texture, and facial features in African American communities. During that time my friend Michelle Parkerson interviewed my mother for the feature length documentary film, A Litany for Survival: The Life and Work of Audre Lorde, that she co-directed with Ada Gay Griffin. Audre died not long afterward, before the film was completed and my mother, Eve, and I attended her extraordinary memorial at St. John the Divine Cathedral in Harlem. More than four thousand people came to pay tribute to her. I was especially moved by a delegation of Afro-German women who spoke of how Audre Lorde taught and inspired them to organize and find their own voices. A documentary film released in 2012 by Dagmar Schultz Audre Lorde: The Berlin Years, 1984-1992 chronicles this remarkable exchange.

Over the past few years, Audre become more central to me as I rediscovered her writing as a Ph.D. candidate and instructor in Women’s and Gender Studies. I nearly lost my mind over her astonishing prose in Sister Outsider, The Cancer Journals and A Burst of Light. I would re-read Zami and her poetry—especially The Black Unicorn, and find myself emerging as an Audre Lorde scholar.

I assign her 1980 essay “Age, Race, Class, and Sex” often on the first days of teaching the introductory course Women, Culture and Society. This essay opens up something in many different students. I return to Audre several times throughout the semester with readings from Sister Outsider, and screen A Litany for Survival: The Life and Work of Audre Lorde. Told through her own voice, the film integrates Audre’s poetry readings, public addresses, and excerpts from Zami. The documentary offers the musings of friends and colleagues—a veritable “who is who” visualization of Black lesbian feminist writers and activists whom I also teach—Barbara Smith, Cheryl Clarke, Jewelle Gomez, and Sapphire. Other wonderful interviews are there—Adrienne Rich, Blanche Wiesen Cook, Sonia Sanchez, Audre’s children Jonathan and Elizabeth Lorde-Rollins, and very briefly, my mother Joan Sandler.

I am currently writing about the presence of Audre Lorde in cinema through the documentaries A Litany for Survival and Audre Lorde: The Berlin Years, 1984-1992. I also engage Dee Rees’ Pariah, the stunning coming of age feature film inspired in part by Audre’s writing. My mother Joan Sandler will actually celebrate her 80th birthday this year in October. She now has dementia and often lives in the past, in her adolescence and early adult years. When I tell her that I am actively writing about Audre and teaching her writing, and that Audre is one of the most influential theorists of Black feminism, Women’s and Gender Studies, and Black Queer Theory, my mother becomes excited and offers a story. It usually involves her, Audre, and Genevieve. 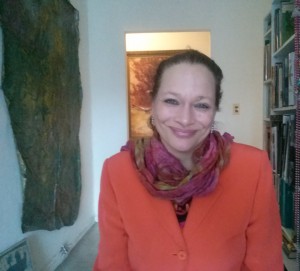 Kathe Sandler is a Guggenheim award-winning independent filmmaker whose credits include A Question of Color—the first documentary to explore attitudes about skin color, hair texture and facial features in African American communities and the forthcoming When and Where We Enter: Stories of Black Feminism.  Currently a Ph.D. candidate at Rutgers University’s Department of Women’s and Gender Studies, Sandler is at work on her dissertation on African American feminist cultural production in the post Civil Rights era.