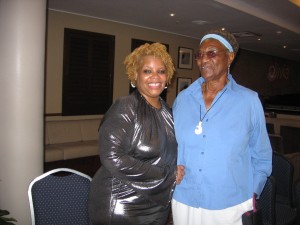 It’s what happens when generation “the studied” meets generation “the studier”—connection. We, some two thousand plus miles a part from each other, meet on a cruise in the midst of some three hundred women. I spot them in the crowd of people who don’t look like me, and before I start my show, I ask for permission to begin. This is an acknowledgement I know they knew—I see you, thank you for coming to see me. They bow their heads in agreement, and the regal one with cocoa brown skin and locks twisted into a crown neatly atop her head, responds, “You may begin.” This was our third meeting on a cruise.

The first time was on a ship filled with fifteen hundred women. I was there performing for the masses, and they were there as guests. Gloria and her partner Helga (Emde). Not sure how or when we met on the boat, but somehow they found me. They showed up after my first performance, and gave me the confidence I needed that I belonged there, “Chile, you are something else. You better give it to them!”  The femme, whom I now know as Helga, grabbed both my cheeks and gave the ultimate permission to stand in the light, a kiss like grandmothers give to their own, on both sides of the cheek. 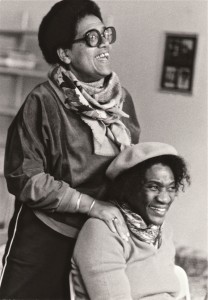 After that initial encounter, we would see each other throughout the ship and exchange glances, and side bar conversations, Helga excitedly saying, “Chile you are fierce,” and Dr. Gloria in her reserved tone, “Thank you for referencing Audre in your work. I loved her.” I didn’t realize the depth of the statement. I just knew she was a woman I wanted to know more about. She loved Audre like I loved Audre.

I loved Audre enough to dedicate my life to making sure other young women would know her long after she was gone.  Because by the time I had found her on the shelves of libraries and in the rows of used book store aisles, she was gone. I had never had a conversation with my personal rock star. After all, our lives paralleled so much “black, lesbian, mother, warrior, poet.” Well, that’s what people would call me. The older women in Chicago—the separatist, feminist, radical lesbians who were the philosophy and gender studies teachers at the universities, who moonlighted on the weekends at Mountain Moving Coffeehouse. Who passed the torch to me when they closed, and I started a safe space for radical women artists to share “authentic” work, not sub-texted down because audiences couldn’t handle stories of survival told unapologetically by black women—their truth, their reality. Open mics existed, but they existed in Chicago to please the audience and men. 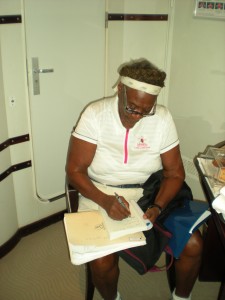 Because I had read “the master’s tools will never dismantle the master’s house,” we built a new house using Audre’s framework for community-building, sister caring, and life saving. For ten years, our volunteers were asked to read anything and everything “Audre” so that they would be able to identify sisters in need and true allies for support. We met in a juke joint on the Southside of Chicago because sisters don’t do therapists; they do bars and hairdressers. They don’t air their dirty laundry to strangers, so bouncers and waitresses became counselors. Many have not been exposed to theatrical productions, so we sought the fiercest spoken word poets in the country to come and speak truth. Many didn’t belong to book clubs, so we would start with a quote mostly taken from Audre’s books like The Cancer Journals or Zami: A New Spelling of My Name or Sister Outsider: Essays and Speeches. Sometimes, we placed them on their chairs in the form of coasters or bookmarks, and together, we did some healing of each other, the way that Audre spoke, wrote, lived.

Fast forward some two years after the closing of Performers or Writers for Women on Women’s Issues (POW-WOW). I am performing on a cruise, and Dr. Gloria approaches me after the show (our second encounter), and whispers in my ear, “I have a book for you. We should do a book exchange.” We talk briefly about how the book is a memoir to Audre. I am interested. I want to know more; however, my schedule as a performer is tight. We miss another encounter. 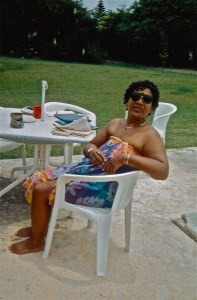 Third connection. We are on a cruise, the one where they see me and I see them. It is a smaller cruise, and I am less busy. We meet at the elevator and decide right now is the time. She comes into my room and sits. Papers sprawl out on the floor, and Ronnie (my hersband, my one) picks them up. Dr. Gloria begins her tale of the sprawled out papers, memoirs to Audre. That she was Audre’s partner. I am instantly reduced to teenage text language of “OMG, for real?!” For the next hour and a half, I am transported in time to Audre and Gloria’s world. I have vivid images of island life and beautiful scenery of Audre’s last days. I am jolted present by tales of windstorms, blowing ashes and boxes and seers who know of Audre’s “soon come back.” I am forever changed by Dr. Gloria signing my book on the page of the poem that references Audre. We both know that nothing happens by coincidence. She knew when she heard me recite the poem the first time that Audre had made a way for me to finally meet her, through the tales and the re-continued connection with Dr. Gloria.
_________________________________________________________ 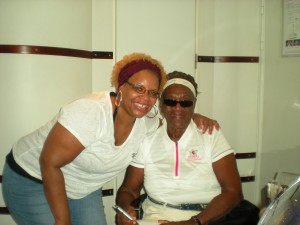 Dr. C.C. Carter is an Assistant Principal at a fine and performing arts high school, as well as a poet who brings the house down whether performing for an intimate crowd of 10 or in a public arena of 10,000. Her poetry and performances make her one of the few spoken word artists to showcase regularly at women’s music festivals, including the Michigan Womyn’s Music Festival and the National Womyn’s Music Festival, and as a featured performer with Olivia Travel. C.C.’s poetry is anthologized and published in over 40 literary works, and her art activism has garnered over 20 awards and recognitions, including a distinguished spot in the Chicago Gay and Lesbian Hall of Fame.