As ringtones interrupt class and texting diverts attention, it is no wonder that many teachers view cell phones as a classroom distraction. But when looked at in a different way, cell phones can provide transformational learning in places when formal classroom settings may not be available. For students in the developing world, education may no longer be tethered to a physical classroom. In places like Afghanistan, mobile phones are actually bringing the classroom to the fingertips of female students. While the mobile phone can never replace the traditional classroom, technologies such as Ustad Mobile and Worldreader can offer an alternative way to access education. But, these advancements raise important questions of how to best balance the coexistence and collaboration of education and technology.

Ustad Mobile is an application that brings literacy and math curriculum to both smartphones and outdated phone models. The app was designed to spread literacy to the 72% of Afghans over 15 who can’t read or write. According to the Ustad Mobile website, the technology was developed by Afghan based Paiwastoon Networking Services and the Ministry of Education to “realize the potential of mobile technology in education; even in challenging settings.”

Afghanistan continues to be a caldron for instability. It is no secret that the Taliban has prevented many Afghan girls from attending school. Among other barriers, schools can be far away, expensive, and present security challenges, especially for girls. According to OxFam International, many parents do not want boys and girls educated together, and traditional Afghan gender roles place women in the home. Despite the $850 million dollars the U.S has spent on education in Afghanistan, girls are still lurking at the margins of Afghan society. It’s the same sad script that we have heard for over a decade. But what if all the security risks and barriers for female students could be dissolved with a simple handheld device? 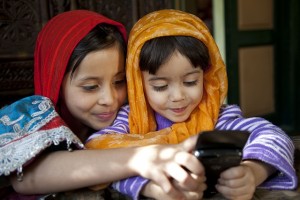 In August 2013, Ustad Mobile launched their pilot program and recruited 200 female police officers to participate. The United Nations Mission in Afghanistan reports that Ustad Mobile is “not only teaching women to read but turing them into more effective police officers.” The simple interface teaches lessons in Dari and Pashto and each lesson lasts approximately 30 minutes. These lessons come in various forms such as: “Narrated demonstrated slides, videos, multiple choice quizzes and games.” This effort will only strengthen the country’s literacy base and expand opportunities for women.

But the real question is how can this model be expanded to create opportunities for females throughout the globe? In countries where education institutions have all but evaporated, mobile phones can be the architects and drivers of literacy. In addition to lesson plans, electronic books can be used on mobile phones to revolutionize the way people learn to read.  This concept is one that former Amazon CEO David Risher hopes to promote through his non-profit Worldreader. Risher aims to harness the “widespread mobile technology availability and the falling costs of e-readers” to create fundamental and profound social change. Put simply, mobile and e-readers require less maintenance, are less expensive, and are more portable than their paper counterparts.

While I love everything about paper books–the smell, the binding, delicately folding the page after I finish a chapter–consider how quickly a print book can become obsolete.Though some bristle at the impersonality of mobile/electronic books, these devices instantly connect developing countries to literature and lesson plans. What is more, these platforms can be easily updated with the most current information. Cell phones are compact, easy to transport, and can store a wealth of information.

According to the GSM Association, sub-Saharan Africa “leads the world in mobile growth and impact” with “253 million unique mobile subscribers and 502 million connections.” The popularity of and access to mobile phones has spread like wildfire across the region, but literacy rates remain grim. According to the United Nations Educational, Scientific and Cultural Organization (UNESCO), “150 million African adults are illiterate, two thirds of these are women.” Many women have been deprived access to education and most African governments earmark only 1% of the education budget to the issue of literacy.

With the explosion of mobile phones in sub-Saharan Africa, these literacy rates are unacceptable. One the one hand, culturally relevant spinoffs of Ustad Mobile must be created and disseminated throughout areas with low literacy rates. On the other hand, some of these technologic developments have cast the darkest shadow over places like the Democratic Republic of Congo. To produce cell phones and other electronics requires the highly coveted mineral, Tantalum. According to Congo Calling, the extraction of this mineral has fueled the ongoing war in the Congo.  It is clear that the use of mobile phones raises prominent concerns with regards to human rights abuses. At the heart of these concerns is how these devices can be used as a source of advancement in one community while subsequently being used to wage a war in another.

But, as activist Bandi Mbubi asks, “ Why should we allow such a wonderful, brilliant and necessary product to be the cause of unnecessary suffering for human beings.” Instead, he argues that we can negotiate these tensions by demanding fair trade cell phones. As part of that effort, Mbudi suggests that we call upon our politicians, recycle electronics, create an open dialogue with cell phone manufacturers, and organize awareness campaigns.

In this sense, policies for conflict- free minerals can be established. What is more, the mobile phone can be a source of development rather than conflict. We live in a society too creative to conclude that giving everyone the gift of literacy is too complicated of an undertaking. There is always an opportunity to affect change by tapping into the unlocked potential of existing technology. Perhaps someday we can fix the world’s broken education system. But in the meantime, the greatest hope for literacy is stop silencing the ringtone and to answer the call for mobile education. 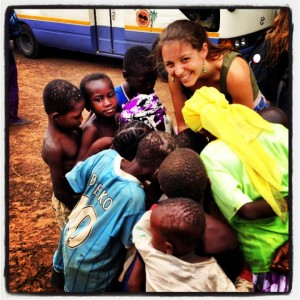 Laura Odenthal is a graduate student at New York University’s Center for Global Affairs. Her research has focused on international development and gender studies. For her thesis, she will travel to Rwanda and create a pilot program for mobile storytelling and mobile education. She has worked for Amnesty International and a grassroots anti-sex trafficking organization. Laura currently lives in Long Beach, NY with her boyfriend and their dog. She earned her B.A in Journalism at the University of Massachusetts Amherst.