A Penny Saved, by Arisa White 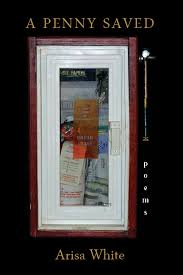 Between September 2001 and June 2012, far more American women were killed by domestic and intimate partner violence than U.S. troops were killed in Iraq and Afghanistan combined. Despite these staggering figures, domestic violence remains largely hidden from public view, underreported and misunderstood.  Arisa White’s most recent collection of poems, A Penny Saved, joins the work of domestic violence activist groups and individuals in revealing the interior nature of domestic violence.  White’s poems take the reader inside the home and minds of a family suffering from violence.  The collection is inspired by the true story of Polly Mitchell, the Omaha, NB woman who was imprisoned by her husband in her home for ten years, from 1993 to 2003.  White’s poems consider how the female body is contained, controlled, and mutilated in the construction of masculinity, as well as how this process produces specific knowledge about womanhood, masculinity, and family. Just as the poems’ characters are left wondering what can be built out of this wisdom, the book’s readers must question what to do with the information it provides.

The elegantly-written collection is arranged in three sections: “I. My body wings blue,” “II. She lives in your hand,” and “III. Leave the clouds, bring bouquets of grass.” White dedicates most of the first section to Penny, an abused woman whose story is similar to Mitchell’s. The second section is chiefly concerned with Penny’s daughter, Elizabeth, and her imaginary friend, Jewelie, while the third section presents the voices of Penny and her abuser, David. Penny and David’s anthropomorphized house also appears as an effective narrator within the collection. The chronological arrangement of the sections and the linear narrative of the poems allow the reader to experience the dismal expectation and daring hope that Penny herself also feels.  We know how stories like this end, but we cannot help but hope for a different outcome.

White connects this hope to love and to knowledge—or the lack thereof. Just before the first section, White includes an opening poem, titled “Will know nothing.” The poem reads:

Deep inside the quiet deep parting of private seas

to leagues of muscular chants, there is a love

to pay attention to architecture, its integrity, whether

it will last the shake     we go story after story

thinking the roof will know nothing of the ground.

“Will know nothing” is both an introduction to the situation of many abused women and a call for the reader to interrogate her own attitudes toward abuse.  Both survivors of domestic violence and the people around them, White suggests, “will know nothing,” willfully.  By stating this problem up front, the poem asks the reader to think about how “knowing” is produced, obscured, and destroyed through violence.  White’s use of caesura and whitespace mark this type of loss or absence, imposing the rhetorical force of silence and the violence it can enact.

Throughout the collection, White plays with the possibilities of free verse to highlight, enrich, and augment her content.  This skill is best exemplified in “Play well,” written in two columns, one dedicated to the children and one to the parents.  The columns exist separately and tell different-but-related stories, yet their simultaneity allows the chaos of the parents to intrude upon the children’s stories, so that even the act of reading is interrupted by the constant threat of David’s violence.

A Penny Saved is at its finest when it explores the psychology and voices of those who live with domestic abuse.  Violence, in White’s story, becomes a stand-in for many emotions, including love, fear, and sadness. As the speaking voice of David puts it, “I ripped back your skin to see you still here with me.”  Through graphic scenes of violence, these poems humanize both the perpetrators and victims of domestic violence, making it impossible to dismiss the epidemic of abuse with a simple, willful refusal to know.  White’s emphasis on the interiorities at play in scenes of violence render common and misguided questions like why didn’t she just leave him? moot. Instead, White enjoins readers to ask: how did she stay with him?  Or, as White herself stated in an interview with David Perry, “when do you know when it’s safe [to leave]?”

With this rich exploration of interiority, the reader is left with an important set of questions regarding what comes next: what do the victims and do with the knowledge that has been destroyed and produced through this violence?  What do they do with the people they have become? White’s collection leaves many of these questions unanswered. Instead, Penny is left looking backwards, asking for “the understanding that comes when you learn/ the best time to hang your laundry to dry,” and wishing that she could wipe the slate clean. On the other hand, David is granted the space to admit his wrongs, give instructions to Penny as to how to proceed, and to proclaim: “it’s time to grow this pain beyond blame.”

Although David is not the voice of the last poem, it seems he has the last word, particularly as his last lines summon the book’s title; he states: “Penny, this is your rainy day.” Recalling two adages, “save your pennies for a rainy day,” and “a penny saved is a penny earned,” David’s words and the collection’s title suggest that, as her name states, Penny is an object of proscribed value and little individual worth.  In a collection dedicated to exposing the inner workings of domestic violence, and to humanizing its perpetrators and victims, Penny’s relative lack of agency is particularly sobering. The collection stops short of considering the potential for rebuilding life after domestic violence; it provides the reader no clear pathways for knowing how survivors survive once the violence ends.

And perhaps that’s the point.  We want to read about resilience because, as White aptly foreshadows, we want to believe “the roof will know nothing of the ground”—that the story will be resolved wholly and completely, with little messy in-between. Yet maybe this is not supposed to be—or cannot be—a story with a happy ending.  As it is told, A Penny Saved is a story about how violence forecloses on the future and irreparably damages lives.  In this telling, White’s poems ultimately succeed in giving readers not the story we want to hear, but instead the story we need to hear if we are to do a better job of saving the Pennies in our own lives, and in others’.

Sarah Mantilla Griffin is a mother and a cultural critic. She holds a Ph.D. in English from the University of Pennsylvania and a B.A. with honors in American Studies from Stanford University. Her research primarily focuses on African-American literature, with special interests in women’s writing, black feminist theory, and sound theory.