“Writing Under Siege” by Shakeema Smalls – The Feminist Wire

“Writing Under Siege” by Shakeema Smalls

Today, you went to the grocery store where you inquired about a job. You’re on your last $25. Strangely, after suddenly finding yourself unemployed, you feel like you are coming closer towards a feeling that might be called contentment. The anxiety wanes, a little, but the words will not come.

You return home to make yourself a coffee. You put away the few pieces of groceries. Though, you don’t have enough money to shop for the week. You surmise that shopping for the week won’t be a privilege that you’ll be able to partake in until quite some time in the future.  But you got enough. You’re getting closer to contentment about your efforts, the day-to-day inconveniences, and the fear that accompanies living in poverty, albeit with the privilege of having obtained higher education.  Contentment requires that the enough be savored. That the moments in life be savored, rather than simply dismissed in the illusory linear monotony of time.

Anyway, you fix your coffee and realized that you forgot toilet paper and the Clorox that you  needed to clean the fridge, so you grab your coffee mug and keys and go to the corner beauty supply to pick them up. You know, the one that’s not Black-owned and sells the overpriced shit? Yeah, that one.

You hear people chuckling as you walked past, “Hehe…what you got in there?” It’s not normal to see someone walking down the street with a coffee cup. But you’re in your lounge clothes. You’re cool.

You see the same people, mostly men, that you see everyday lying and sitting on the sidewalk by the store. They’ve given up on looking for work for any  number of reasons, not limited to resignation after repeated rejection. Your neighborhood is a food desert (hence your lengthy walk to the grocery store). The only businesses that exist are a couple of carry-outs, barbershops, a community job resource center, and a few corner stores. You don’t live in the nicest area.  But it’s your element because it is so much like the neighborhoods you grew up in. You get it. You don’t feel out of place here, like you do when on the campus of Howard, your alma mater, or Adams Morgan, or downtown. You’re content, here.  You think, ‘content’, because comfortable would be an inaccurate way to describe how yourself and your neighbors feel about the neighborhood. You’ll venture out on a limb and say that you don’t think that anyone feels…comfortable here.

Since childhood, you’ve had this tension about life. Your family is comprised of drug addicts, drug dealers, and repeat offenders. Your grandmother raised you in New York City and South Carolina, navigating both the semi-rural and urban-scapes of poverty in the U.S. This forced you to pay closer attention to things than a child might, otherwise, such as the cost of rice or the value of a bus token. You grew up watching your grandmother make difficult choices between school supplies and groceries. She was always putting money in commissary for your two addict parents and drug dealer brother, and still managed to pay the rent. The normal of her anxiety made creases in her fists where she would tighten them to pray. Anxiety became your ‘normal’, too.  In the context of this normal, you have had to fashion an active resistance to it all through writing.

You are constantly reflecting on resistance in the practice of writing, your role as a writer, and what it’s like to write under siege, whether physical or emotional. To say that neighborhoods like yours are warzones might seem excessive to people who hear about the ruins of Iraqi villages or see historical photos of WWII. But being poor and Black creates a space for physical and emotional warfare. You see it in the vestiges of Chicago, where mourning mothers get together like quaint book clubs to see their murdered children off into an early grave. You see it in the eyes of a man having a stroke on the street, right before your eyes. He’s dying next to the shit of a woman without a home who couldn’t hold her bowels any longer.

War is relative, but its effects are real.

Vonnegut wrote much about war. In, God Bless You, Mr. Rosewater,  he said, “If you would be unloved and forgotten, be reasonable.”

This is what is expected from human bodies under siege. As you sleep, as you move through your waking state, in the dark or in the light, you must remember the isolation that one feels in such a state. Many a martyr and saint have ruminated on this feeling, as it has driven countless non-believers to God and others into even deeper frenzy. You search for something.

Your guts will clench every morning. They will interject feelings of joy, sadness, and rage that sporadically keep you company throughout the day. You take it all in stride.

And you are expected to be reasonable.

The assumption of ‘reason’, here, implies lack of resistance or a discursive, unfocused resistance that ceases to be useful in sustaining one’s self in the world.  The desire and necessity of resistance for those under constraint is why writing must become habit, and habit requires the precursory practice to establish itself. This is how you are finding contentment while under duress.

There are writers all over the world facing war. Some wars are more obvious than others. You recall Thomas Friedman’s work on the conflicts across the Middle East called, “From Beirut to Jerusalem,” years ago, and reading about the long war in Beirut, Lebanon. Constant threat of having one’s house eradicated by a bomb and not waking up the next day to comb one’s hair, or children playing in the rubble of a destroyed street…this is how the Lebanese coped under siege. It wasn’t that one could call their position in time or space, “happy,” “fine,” or “safe.” We look, not so much, at the lack or presence of contentment, but what humans make of themselves in the midst of war.

Though buildings aren’t being bombed on our soil, and you have no relation to a close relative’s severed torso, you witness the siege going on in our hypothetical American backyard. While you won’t deny your privilege as a recent college graduate, you struggle with the reality of remaining a poor, Black woman who is really just trying to survive.

You bear witness to this, because you are a product of it.

This is you making yourself. 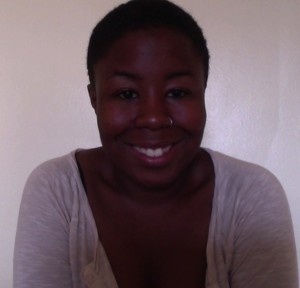 Shakeema Smalls is a freelance editor and teaching artist living in S.E. Washington, DC. She is the Founder and Managing Editor of joINT. Literary Magazine.