The Color of Teaching: Expectations of Mammy in the Classroom – The Feminist Wire

Home / Academia / The Color of Teaching: Expectations of Mammy in the Classroom

The Color of Teaching: Expectations of Mammy in the Classroom

By Guest Contributor on November 6, 2013

On October 24, 2013 the Center for American Progress released a report, The State of Women of Color in the United States. In the 40-page document there are data points comparing the economic, health, educational and employment status of African American, Asian and Hispanic women to their white counterparts. Most prevalent is the statistic suggesting that by the year 2050, 53% of the female population will be comprised of women of color. This data is particularly salient to me given my obsession with engagement in the social institution most predictive of life success: education.

Education has long been a field dominated by men, but teaching is a profession spearheaded by women. By the year 2020 it is projected that there will be 3.5 million K-12 public school teachers. If trends continue, 75% of those teachers will be women. It is also projected that in 2020, 37% of women in the United States will be of color, yet only 8% of female teachers will be ethnic minorities. Similarly in higher education, just under 50% of full time faculty are women but less than 8% are women of color.

This begs the question: why in a profession with a critical mass of women are so few of them of color?

The answer to this question can be found in part in historical educational policies. Most notably, Brown v. Board of Education all but eradicated the African American teaching workforce. To integrate schools, black children were removed from black classrooms with black teachers and placed in white classrooms with white teachers. The abandonment of black schools left thousands of African American women unemployed. With no hopes of attaining a position in an integrated school, these women were forced to choose a new career path. Those who could afford to return to higher education became nurses, but most became secretaries or domestics.

On my first day teaching my first course as a professor at a small liberal arts college I knew what to expect. Having taught during graduate school at an institution serving a similar upper-class white student body, I knew how I would be perceived when I walked in the classroom. The 200-level Introduction to Education course was comprised of 16 white students and 2 biracial students who self-identified as white. Perhaps more pertinent was the fact that I was co-teaching this course with the Chair of my department—a middle aged white male.

I knew my students would compare me to my Chair; it’s the human thing to do. They’d compare my afro adorned dark-skinned body to his familiar white masculinity. His laid back persona would juxtapose my impassioned physicality and his ways would be the way. Despite the fact that his background as an environmental scientist renders him less qualified to teach such a course, his perceived role was to teach, and my role was to…

The mere presence of a white male in a “white male’s space” relegates me to the “black woman’s space:” to my presumed and rightful position of Mammy. Though I am Southern and have been known to use the word y’all, I am under 30, stand a slim 5’9 and have neither large breasts nor child bearing hips. I don’t wear bandanas or aprons and I certainly don’t wait to speak until spoken to. But this did not, does not, stop students from projecting their desires for nurturance onto my black female existence. It does not stop them from perverting my pedagogical style of other-mothering into Mammying.

This is a common experience for brown and black women in any classroom. Because of our skin color, hair texture or cadence of speech, we are expected to assume our historical role of nurturer by embodying the Mammy. Like house slaves of the 18th and 19th century, turned housekeepers in the early 20th century, we are presumed to exist to meet the needs of the children — as determined by the children. There is a hierarchy of power encased in an age old framework of entitlement and egocentrism. As one student wrote on a course evaluation, he has ‘the right to feel good’ when he is in my classroom. Implicit in that comment was the implication that as a darker bodied woman I am naturally inclined (and expected) to make that happen. More obviously was the brazen admonition that his feelings of confusion, anger and guilt were because I failed to attend to his emotional well-being. Like Mammy, I am categorized as a service worker, here to provide instead of guide. And if I am not her, I should become her.

Instead, I hold tight to my pedagogical beliefs and my natural style of teaching. What I do—what so many women of color do in the classroom—has a name: warm demander pedagogy. In her 2006 article, Franita Ware describes these teachers as women whose ethic of caring situates them as other-mothers to their students.  Like mothers of brown and black children, warm demanders have high expectations, are authority figures and disciplinarians, they are caregivers dedicated to individual students’ needs, and they build relationships with students that extend beyond the classroom. This pedagogy is more than a teaching method. It is a way of engaging students cognitively, socially and academically. We do more than attend to students’ emotions; we help them attend to their own development as emerging scholars.

The perversion of our other-motherness into the caricature of Mammy discourages women of color from teaching as their most authentic selves. We are expected to cultivate student voice while silently acquiescing to white male constructions of teacher quality. We are the token few deemed good enough to enter the Master’s domain and we should show our gratitude through deference.

You have not done me a favor by ‘allowing’ me in the house. I earned my space. I reject your attempt to rectify the relationship between black women and white privilege through thinly veiled oppression dressed up as opportunity. Yet so many women, too many, accept this as par for the course in education. Just as our poor, immigrant and ethnic minority students deserve the right to learn, brown and black teachers deserve the right to teach. Without our hands tied by apron strings.

The report (mentioned above) conclusion includes a foreboding statement: “In a way, the fate of women of color will be the temperature of American life and prosperity.”

I can’t help but question, how does American life shape the fate of women of color? 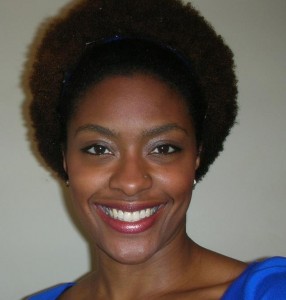 Manya Whitaker, PhD is an Assistant Professor of Education at Colorado College. Her areas of expertise include urban education and educational psychology. She earned her PhD in Developmental Psychology at Vanderbilt University where she did considerable coursework in Teaching and Learning. Her undergraduate and graduate courses are primarily concerned with social and political issues in education as Dr. Whitaker is a strong advocate of community-based learning within a social justice framework. Her research is focused on parental involvement in low-income schools.