COLLEGE FEMINISMS: No Fat, No Femme: The Politics of Grindr – The Feminist Wire

Home / College Feminisms / COLLEGE FEMINISMS: No Fat, No Femme: The Politics of Grindr

COLLEGE FEMINISMS: No Fat, No Femme: The Politics of Grindr

By Guest Contributor on November 8, 2013

I turn on my phone and allow my fingers to scroll across the numerous apps. I select “Grindr” and smile with anticipation. So many possibilities await me! Loves undiscovered, connections that I may not have been able to make before. As I read more and more profile descriptions I become disheartened. “No fat” I see.  I take in phrases such as “no femme” or “masc only.” Everything I’ve learned in my courses about feminisms has been thrown out the window.

Grindr has become a large cultural phenomenon within the gay community that offers an experience that may be both liberating and oppressing. Many users will claim that they are not looking for hook ups, although Grindr has earned the reputation of being a “hook up app.” It is empowering in that it allows persons to locate gay men who use the app who are near them, even offering an approximate distance. For someone who is newly out or simply questioning, this can be an opportunity to find a friend or confidante.

The attitudes that emerge on Grindr, however, are counterproductive to many movements. Numerous profile descriptions include languages such as “no femme” or “masc only,” which acts to devalue many men who may not fit into the traditional prescriptions of masculinity that have been scripted and assumed in our patriarchal society. Often, this language can become transphobic, using slurs that exclude many users. Many profiles also include language such as “top only” or “top/verse.”

Misogyny has crept so greatly into our culture that even sexual positions within the gay community have become politicized. To admit openly that your preference is being a bottom is to admit an air of what is perceived as femininity. Many users mask this fear by adding the term “vers” or versatile because it allows space to negotiate. In a community that for centuries has been forced time and time again to prove their masculinity, femininity has become stigmatized to a degree that is often frightening and exclusionary.

Racism is also prevalent in our current Grindr culture. Some phrases that are popular are “no Black, no Asian” or “white guys to front of the line.” People are being given value based upon their race. However, for some, if they aren’t being rejected, they are being fetishized. For example, another popular moniker is “Rice Queen” or “Rice Daddy,” which is a racist descriptor used to describe gay men of non-Asian descent who are particularly attracted to Asian men. As a former Grindr user who disclosed his Jewish identity on his profile, I was subjected to an interesting mix of messages such as, “I’ve always wanted a Jewish husband” and “Do you have any Jew gold to spare?”

There’s a fine line between sexual taste and sexual fetishization. There are assertions, even scientific, that suggest that sexual preference is inherent and not socially constructed. It would be difficult to completely remove socialized beauty norms from this phenomenon, however. We have been told too often and from too many sources that certain appearances are better than others. In a different time in my life, I often felt unworthy and unbeautiful because I didn’t fit the standard of beauty for men.  A student of feminism and race theory, I am often questioning where fetishization begins and ends.

By exotifying flesh we otherize people. Though one’s intent might not be racist et al., the language sometimes used to describe fantasy and desire is at times racist and othering, especially on Grindr. In this new world of technology, interaction has — to some degree — become so impersonal that no consideration is taken for other parties.  Simultaneously, users are turned into objects that either fit or don’t fit another user’s desires.

The terms “no fat” or “no fatties” appear often, and I cannot say that I am surprised by the persistence of this given the “Adonis Factor” that has always had prevalence within the gay community. Yet, while fatness is being devalued by some, it is being fetishized by self-identified “chubby chasers.” In using this app people are expected to disclose their sexuality and gender, but are also expected to disclose their body types. This others body types that do not fit a norm. This is particularly disheartening for someone who embraces fatness as an identity.

As a self-identified “fat femme bottom” the world of Grindr is often one that can be cruel to me and others like me. By embracing these terms I hope to cause others to think. Is there a problem with accepting these identities and making them a part of my narrative? I don’t believe so. It isn’t uncommon for these identities to make others feel uncomfortable. I can identify as “femme” but this does not erase the male privilege I inherently have. I am, however, devalued to an extent, by the femininity I display.

My brightly colored nails with a confetti topcoat often draw attention and puzzled looks. It is often difficult for others to realize that I’m not here to perform for them. I embrace my femininity as well as my masculinity unapologetically. By openly accepting the label “bottom” I hope to subvert the gaze that I am subject to in a gay culture where being “top” is king. I am a “power bottom” both sexually and socially. My prefered position does not make me “less than.” Taking these identities and being open with them often limits my romantic possibilities, especially with men who are afraid of them. I find, however, I would prefer to be unapologetically me than conform to a norm for companionship.

Fatphobia appears in many realms of our lifeworld, but the oppressions felt cannot be compared. For a woman, being overweight or not fitting what society has defined as the norm can often be difficult. It is interesting to see how women who own the label of fat at times garner praise from the gay male community and ridicule from the heterosexual community, while I as a gay man who embraces the label fat receives praise mostly from the heterosexual female community and ridicule from the gay male community. Being female and fat in a society that has set very specific beauty ideals is difficult, especially when occupying a body that has always been subjected to a sexualized male gaze.

At times I feel this attitude in the gay community. It’s desexaulizing. Instead of being viewed as sexual subject or a potential romance, I am sometimes forced into the category of the “frumpy gay friend.” Still, I have learned to embrace my identities and my body. Yet, I worry for others, particularly future generations, who have not. Technology such as the Internet and apps like Grindr have given us greater access to communication with people who are like us, but has also worked to expose us to the world’s caprice.

Grindr has become a space where one can find many problematic values of misogyny, racism, body-shaming and other violent language. It is my greatest hope that these attitudes will one day encourage others, specifically young men, to start a dialogue about how we “other” individual’s identities and place value on one another according to the spaces we occupy — and how we occupy them. Persecuting each other for our differences isn’t working for us.  It doesn’t allow us to address many of the greater issues facing the queer community. 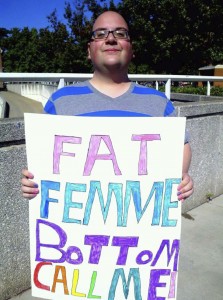 Nick Artrip is an undergraduate student at Virginia Commonwealth University (VCU) double majoring in Gender, Sexuality, and Women’s Studies and Religious studies. As a student, Nick is heavily involved in the Jewish community on VCU’s campus, and is involved in various feminist and queer oriented organizations. His main interests are Jewish feminism, queer theory, and the politics of masculinity.