By Guest Contributor on September 4, 2013

Love note for Cecilia Payne-Gaposchkin, 1900-1979, English-American
astronomer and astrophysicist who, in 1925, discovered the composition of stars.

The Harvard moths were confused by you, sweet
visitor working so late, Cecilia, a galaxy
of a girl who stretched her arms overhead and twirled

in a loose black dress, always looking
up, desperate to determine what was glowing,
to point the open lens towards every star. You knew

that the glowing sun was chemically similar to Earth
although except for the moths, no one listened. What
do women know of science? Eventually, a man realized

you were right and took credit for your research.
In your awkward moment of discovery, you belonged
to neither women nor scientists, you floated in between

like those early years, neither assistant nor astronomer
as if you only half-existed. Astrophysicist, working woman,
I want to dance with you, I want to sing your Magellanic Clouds

and your two million observations of variable stars. They wait
in the distance, flecking down to earth. Together
we can throw ourselves against those small messages of light. 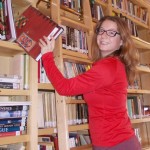 Stacey Balkun’s work has appeared (or will soon appear) in The Los Angeles Review, THRUSH, Bodega, and Perfume River Poetry Review, among others. Stacey was named a finalist for the Tupelo Press Spring 2011 Poetry Project and the Tucson Festival of the Book 2013 Literary Awards, and received the 2013 C.G. Hanzlicek Poetry Writing Fellowship. She also served as Artist-in-Residence at the Smoky Mountains National Park in the summer of 2013. She lives and writes in California.