Whose (In)Justice? Whose Tears? Whose Peace? – The Feminist Wire

Home / Activism / Whose (In)Justice? Whose Tears? Whose Peace?

Whose (In)Justice? Whose Tears? Whose Peace?

I am writing in the hopes of coalition building: civil rights/sex/gender/economic/environmental justice movements.  And I am writing while remembering the Central Park Five—five Black and Latino teenagers found guilty of a brutal rape that they did not commit in 1989, yet spent years in jail before being released. Their loved ones and families, along with all the un-named silenced victims of white privileged racial and sexual crime, form the bigger story told here. 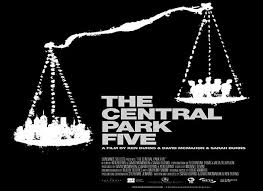 I listened to Juror B29 apologize to Trayvon’s mother, and I did not quite fathom it.  But who am I, a white female, to question her, a brown Puerto Rican? She is hurting and was deeply devastated for her part in the acquittal.  She says that Zimmerman is guilty of murder and that he got away with it.  But I am thinking her explanation sounds too similar to “thinking like a white woman.”

In an earlier piece that I wrote about the almost all white female jury, I say that I do not think that the jury tried to imagine themselves as Trayvon on that night; or as though he was their son; or that they were his mother.  Instead they appeared to identify more with Zimmerman, and his supposed fear.  They saw the so-called facts through a prism of white (female) racial privilege right along with the judge’s reading of the law.  As a result, they–including Juror B29–could not assign “intent” to Zimmerman.

There are several issues here. Race matters, but in this case white privilege and its protection in a veil of neutrality is the “racial” problem. Race applies to whiteness. Yet white people are not “raced” per se because we are the standard—a person of color is most often described as such where a white person is named more in terms of their gender.  Hillary Clinton was described as a female candidate; not as a white one.  Barack Obama was described as Black.

This leads to the problem of what I will call the “white mind,” which is not necessarily a biological category although it often is, but rather a way of seeing. This mind-set privileges what is seen and interpreted through a lens, which defers to: rationality, abstract inclusiveness known as individualism, the scientific model of cause and effect, and the dichotomous viewing of either/or.  Complexity and multiplicity are pushed away in and through these viewings.  Law, and especially criminal law, is deeply embedded in this “white mind” stance.

Whiteness is then a way of seeing, knowing, hearing, thinking.  It clings to a notion of universality, objectivity, and neutrality; instead of specificity, historicity, subjectivities and disparate outcomes. Rationalism; either/or dichotomies; truths and falsities with no grey areas dominate. People are indoctrinated in the notion of abstract individualism as though it is extended to all, rather than to a few—by race, and class, and sex, and gender.  The more abstract and a-historical the stance, the more easily the years of chattel slavery are forgotten and white privilege is normalized.

For those of you who are committed to careful, reasonable, and rational use of law, I am with you.  But this is not the same as a rationalized/normalized whiteness, or rationalized/naturalized heterosexist misogyny.  When bifurcation of thought undermines the possibility of complexity and diversity of meanings, in the name of rationality, it licenses murder.  The white legal mind, as such, is deadly.

Supposedly, the law–post-slavery and Jim Crow–are color-blind, but little else of life is.  So the interpretation and application of law(s) is highly biased and subjective no matter what the law intends.  Given this, the law can at best be used to create justice by controlling for racial bias, and by recognizing that race matters.  As such, the law should never be assumed to be” just” in and of itself.

To say that the law “itself “ required/demanded an acquittal continues to abstract and legitimize and decontaminate law.  But law, even good law is always already contaminated.  It is never completely objective or un-biased.  It cannot be.  U.S. law was written with white propertied men in mind.  So there is no mention or recognition that law is raced at its “heart.” Nor that it is gendered or sexed or class-based.  It is why Chief Justice Rehnquist could argue against abortion—that the constitution never meant to include pregnant persons. The only way to counter this bias is to see, and think, and decipher with the heart of a female person of color.  This viewing is not subjective in and of itself—it is rather a corrective for the racial bias of the law. 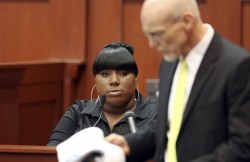 It becomes critical that the Trayvon Martin case was said to NOT be about race—by the prosecutors themselves; and not about racial profiling–by the white female judge.  So let me clarify that one can think as a person of color—meaning correcting for white privilege bias, whether they are white or another color.  And one can think like a white female and not be white or female.  Race and racism and its gendered forms are complex and are no longer simply color-coded as in the days of chattel slavery.  Think today of Condi Rice or Clarence Thomas.

I am saying that race is not simply coded by one’s skin color, although it most often is. This is why mixed race juries are needed even if not always the deal breaker one hopes for.  And that therefore the whiteness of the (in)justice system is complexly structured through law that can be dispersed in ways not automatically knowable.  So, an all white jury is going to be problematic, but Juror B29 does not resolve this issue easily.  She thought like a white woman: instead of seeing the problem of race in the legal narrative, she looked to the law to resolve the racism that was said to be non-present.

Where and when does white privilege begin?  Is it above? Below? Inside? Outside the law? Who made the laws in the first place? Who is interpreting them and how? There is no law per se without interpretation. There is no such thing as “law” in the abstract, without the contestation.

Oscar Grant was a 22 year old black father and loyal son, who was killed without provocation by a police officer in a BART station in Oakland, California, on New Year’s day 2009.  He was unfairly singled out, along with several of his friends, for being a “suspicious” young black male. He was shot dead in the back and the police officer, Johannes Mehserle, said it was a mistake. Mehserle held that he thought he was pulling out his taser, and instead shot off his gun.  There were no Blacks on the jury which was made up of eight women, four men, seven whites, four Hispanics, and one Indian American.

“Race was said to NOT be a factor” in this case as well.  Mehserle is said to have yelled: “Bitch Ass Nigger” to Oscar.  The court thought this might have racial overtones. Might? Mehserle was found guilty of involuntary manslaughter, rather than guilty of second-degree murder or voluntary manslaughter.  He was released from jail after just 11 months, after being given 292 days credit for time already served.

The important film that depicts Oscar’s story, FRUITVALE STATION, by Ryan Coogler, shows us Oscar, the person—struggling to make a difference in his young daughter’s life—while facing the limits and burdens of a deeply racialized and classed society.  The actual shooting—which leaves everyone who is watching the film breathless—has a pre-history to be reckoned with.

There is a racist narrative that pre-determines the killing of Oscar Grant. Maybe the cop thought he had his taser in his hand, although during the trial it was made clear that tasers are worn on the opposite side from the gun, that they are much lighter, and that they are yellow. But whatever the intent here, Oscar was killed and he was shot because he was a feared Black male. The moment Oscar was pulled off the train, his death became too probable. 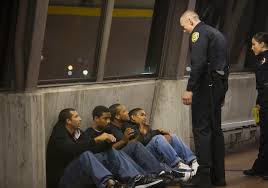 My biggest problem with the aftermath of both of these trials is that they are used to “white”-wash the legal system and protect the supposed neutrality of law. As a result, there is no culpability of the criminals, and also the rest of “us” who assume the fairness of law. “The” law per se gets off scot free, and even with a blessing from President Obama. He asked for calm after the Zimmerman verdict saying, “We are a nation of laws.” And what exactly does this really, rather than theoretically, mean? There is much focus on changing “stand your ground” laws today, as there should be, but what about a broader indictment for legal change?

Too many people, especially Blacks, live in a toxic environment: with self-defense laws for white men, and too-easy access to over 300 million guns in our communities. African Americans experience gun violence at a much higher rate/risk than whites and UNsurprisingly disproportionately support gun control.

Each time there is a trial that is followed by a public discourse that seems to have accepted the narrative that there were insufficient facts and not enough evidence to support a guilty verdict, I think white racism has won. Law is embedded in and protects—intentionally and inadvertently–structures that are unequal—racially, sexually, and class wise. This injustice must be attended to. It is insane to think that Zimmerman was culpable and not use the legal system to say so. Actually, it is totally irrational not to do so. White privilege must be held accountable for its criminality or we must close the courts and the prisons.

These recent exposures of a deeply racist and gendered legal system are also seen in the case of Marissa Alexander, a victim of Florida law as well who was sentenced to 20 years in prison for firing a warning shot at her abusive husband. Stand your ground did not work for her—as both black and female. A massive campaign has now been launched to free her.

Here is hoping that Trayvon and Oscar and Marissa’s indefensible verdicts spur new social justice movements throughout the country. End stop and frisk, repeal stand your ground laws, round up all the guns, and release all the women like Marissa Alexander from prison and return their children to them. Now that is a new kind of de-racialized justice that is totally rational. 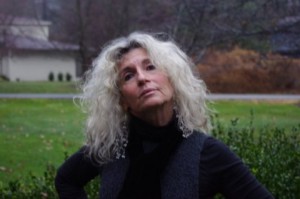