Op-Ed: When A Mother Chooses the Pump – The Feminist Wire

Home / Activism / Op-Ed: When A Mother Chooses the Pump

Op-Ed: When A Mother Chooses the Pump

Three days after I gave birth — following 54 hours of labor, including eighteen hours of IV fluids that left me (and my breasts) swollen with edema — my daughter was jaundiced, listless, losing weight, and not producing wet diapers. Lactation consultants told me her problem was “inability to latch.” In my frazzled state, I heard “inability to thrive” for her, “inability to provide” by me, and “inability to bond” for both of us.

I wanted to follow the guidelines set by the American Academy of Pediatrics that recommended exclusive breast-feeding for the first six months. Unable to give my daughter the breast, yet having read too much about the problems associated with the formula-filled bottle, I turned to the middle way: the pump. 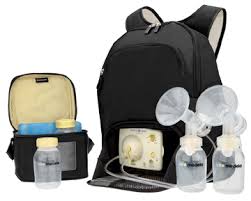 August is National Breastfeeding Month, and mothers nationally are participating in “Latch-On” events — group photo-ops of women breast-feeding their infants. Yet left out of this picture are women like me: Mothers who cannot nurse, but choose to pump exclusively.

The issue goes far beyond image, however. With the upcoming Affordable Care Act’s coverage for breast-feeding pumps, greater understanding of pumping is essential so that states and insurance providers can develop policies that cover the expenses related to exclusive pumping, making it more feasible for mothers to follow the AAP’s recommended guidelines to provide as much breast milk as possible to their infants.

I was a reluctant pumper. While pregnant, I couldn’t wait to breastfeed. I amassed breastfeeding pillows and organic nipple creams, and started taking “mother’s milk” tea at 36 weeks. Mainstream medicine, radical eco-feminists, and my own immigrant mother agreed: Breast was best. Breastfeeding promised a higher IQ, fewer food allergies, greater bonding, and a better immune system for baby — as well as faster weight loss for mother.

My baby had other plans for me, though. For the next six months, an electric pump suctioned milk from my breasts into plastic flanges, and then into ice cube trays and bottles that I stored for later use. And I learned that almost none of the conventionally held wisdom about breast-feeding — that it is easy, comfortable, free, and promotes mother-infant bonding — applies to the pumping mother.

Pumping is difficult: No machine can stimulate milk production like a baby pressed against a mother’s breast. It is painful. And it is expensive: High-quality pumps, several sets of flanges in various sizes and angles (as I tried to find something comfortable), three hands-free pumping bras, six sets of tubes, 25 storage containers, ice cube trays to store the milk, five sets of connectors, a car adapter, a battery pack, coolers, teas, herbs, and instructional books meant that I easily spent $800 a month to pump. It was quadruple the cost of formula, even if I’d bought the most expensive organic powder and the best BPA-free bottles.

As for mother-child bonding, I spent four or five hours a day pumping—at work, at home, even in the back seat of the car huddled under a huge apron and oversized cardigan. In lieu of holding my daughter, I spent hours sterilizing parts, storing and labeling breast milk, and organizing milk in stages of freezing and defrosting.

When I bottle-fed her with my own hard-won breast milk, I felt the stares. I knew how other woman judged me for using what they assumed was formula. Moreover, I judged, too: I’d been so excited to become a “lactivist” that I had felt nothing but scorn for a friend who was formula feeding. I felt an acute sense of failure: How could I be that mom? And yet, here I was.

Through these experiences, I came to understand that some reforms are necessary to include and support the pumping mother:

Time and space to pump. I was lucky in that I have a private office, with a fridge for storage and a sanitary sink that is not in a bathroom. Although New York Labor Law Section 206-c requires that employers allow nursing mothers to express milk, many workplaces do not have cultures and facilities that allow for sustained pumping. While breastfeeding a baby is legally permitted in any public place in New York (and 44 other states), it’s nearly impossible for a pumper to find a sanitary, private place to set up her pump.

Proper equipment. With the projected increase in pumping through the Affordable Care Act, and even inclusion in the Federal program Women, Infants and Children, it is paramount that there is ample lactation support for mothers who exclusively pump. High-quality (even hospital-grade) electric pumps, access to expert lactation support, and all necessary supplies should be covered, so that pumping is affordable and feasible.

Less propaganda, more science. Studies vary on the benefits of breast-feeding, though most agree that breastfeeding is beneficial. Yet the degree and kind of benefits attributed causally to breastfeeding — rather than other factors, such as income and education level of the mother — varies. As we invest in pumping, there should also be a study that compares the outcomes of children fed breast milk from the bottle with children fed milk direct from the breast, so that mothers can make the most informed choices.

At my daughter’s six-month checkup, her weight and height were finally doing well on all the charts, and her pediatrician said she was thriving. After taking a long, hard look at her–strong and energetic–I decided to pack up the pump and see myself as a mother — not just a provider of liquid nutrition.

At last, I began to truly enjoy the wonder that is my child. 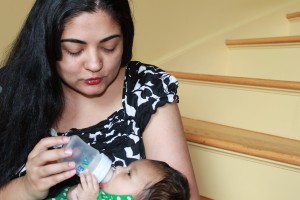 Swati Marquez was born in India, and lives and works in New York City. She is pursuing her MFA in Fiction at Hunter College, where she is working on a book in which immigrant female characters have triple+consciousness.  A current artist-in-residence at the Center for Book Arts, Swati has been making letterpress gait-prop for protests against the gender-based violence and metaphysical illustrated children’s books for overeducated mothers.  In addition, she is a founding member of the South Asian Women’s Creative Collective, an organization dedicated to visibility and advancement of South Asian women artists.