By Ed Goldman, Alexandra Minna Stern, Timothy Johnson, and Lisa Harris of the Program in Sexual Rights and Reproductive Justice, University of Michigan

In spring a dynamic group of activists, advocates, and academics interested in and committed to reproductive justice converged upon Ann Arbor, Michigan for an intense two-day meeting.

We, the core members of the Program in Sexual Rights and Reproductive Justice, housed in the University of Michigan’s Department of Obstetrics and Gynecology, committed close to one year organizing this conference and working hard to make it a productive and welcoming forum for activists, advocates, and academics. This event was funded by the Rackham Graduate School, which included use of its majestic building as part of the package, our department, as well as several university co-sponsors.

Our goals were to facilitate networking, stimulate ideas for working together, explore barriers to collaboration, and exchange information about reproductive justice both in the United States and internationally. The event was open and welcoming to U-M students, staff, and faculty, as well as community members.

We sought to explore and promote Reproductive Justice (RJ) as a movement and framework that crosses disciplines and interest groups, and that explores core issues of gender, race, class, and power in considering the ability of women and men to decide to have children, not have children, and raise their children in a supportive society.

We used the RJ: A3 in A2 title because it was short, catchy, and it captured our idea of bringing activists, advocates, and academics (A3) together in Ann Arbor (A2) to gauge possibilities for collaboration, to explore what potential obstacles to collaboration existed, and to work through how to address and ideally overcome them.

Our approach was multimedia. Part of our team created a historical exhibit, Birthing Reproductive Justice: 150 Years of Images and Ideas, displayed at the Graduate Library and now online. Other members of our team worked with the White Ribbon Alliance to bring a display of handmade quilts from women around the world, depicting stories of maternal loss, to the conference venue. These components helped to raise awareness of the importance of images and the visual in reproductive justice.

We followed a decidedly non-academic model for the conference. There was very little in the way of power points, lectures, or formal Q&A. Instead, we organized four meta-panels about big themes in Reproductive Justice and were fortunate to have representatives from leading RJ organizations offer their knowledge, insight, and inspiration. Academics with allied commitments to RJ shared personal and professional experiences. Extended floor discussions followed these panels. Our planning benefited enormously from input from our external advisory board, who were generous with their time and did not hesitate to ask important and sometimes challenging questions about who this conversation was for and “who was at the table.” This process was instrumental in helping us to create a forum and dialogue that could energize and engage activists and advocates.

With these aims in mind, we consciously incorporated table discussions and working sessions at the conference, the latter facilitated by specialists in areas ranging from informed consent and clinical advocacy to international RJ work and conducting research in “hard to measure” populations. The first evening conference participants had the opportunity to watch a sneak preview of the powerful and disturbing documentary “No Mas Bebes por Vida” about the nonconsensual sterilization of Mexican-origin women in Los Angeles in the 1970s.

As important as the formal content of the conference were the conversations, connections, and networking that happened during breaks and down time. Through these interactions, many participants expanded their networks and began to lay the groundwork for future collaborations.

The event was not without tensions, however. We were aware that as academics, we were inviting advocates and activists into spaces that have not always been welcoming, and too often have dismissed or exploited advocates while appropriating language or ideas from the movement. While we strove to acknowledge this head-on, it was challenging, and indeed remains a challenge that new programs, such as ours, will have to keep front and center as we seek to develop partnerships. It is imperative that academics committed to RJ be willing to meet advocates on their terms, step outside of their comfort zones, and take risks as we work explicitly for and with RJ organizations.  In addition, although we tried to create opportunities for dialogue among our U.S-based and international participants, there could have been more avenues for this global RJ engagement.

Reflecting on what we learned, we identified five take-aways to keep in mind when embarking on advocacy-academic partnerships:

Activist-Advocacy-Academic collaborations are hard work but can be rewarding and productive. Lynn Paltrow and Jeanne Flavin provided a powerful example of this when they discussed their extensive research and advocacy for National Advocates for Pregnant Women. [NAPW was featured in TFW in June 2011.]

Power differentials among collaborators need to be acknowledged and navigated with RJ goals and ideals in mind; this holds for race, class, and other kinds of power and privilege. Loretta Ross, co-founder of SisterSong, addressed this point eloquently throughout the conference.

Relationships and trust are at the core of RJ advocate-academic collaborations; without these two ingredients, partnerships are likely to falter. Sujatha Jesudason of CoreAlign thoughtfully articulated why and how relationships are core requisites for any potential and long-lasting research and advocacy collaborations among activists, advocates, and academics.

We realized that the conference might have been even more appropriately called A4 in A2, recognizing the important work of artists and visual communication and expression in RJ work. The graphic artist and founder of 4000 Years of Choice, Heather Ault, made this critical point at the beginning of the conference.

RJ work won’t be completed in a day, week, month, or even year – perhaps not even in one decade. Engaging in RJ requires big vision and signing up for the long haul. As one participant said: “You need to have skin in the game.” Academics cannot be seen as “studying women” or reproductive rights or reproductive health as stand alone areas, but also as participating in moving RJ forward over the long term.

As with any short meeting, one of the great challenges is sustainability. How can we maintain and grow the networks that were seeded and solidified during this conference? Even with more advancing communications technologies, such as webinars, how can we stay in contact and move ahead on projects?

Finally, one of the most resounding take-aways from the conference was the ever-important question of: whose needs are at the center of our reproductive justice projects and efforts? Keeping this question in mind as we embark on partnerships can help guide us as we seek to advance reproductive justice as a model and vision of far-reaching social change created by and for women of color with human rights potential for all.

Ed Goldman is an attorney and Associate Professor. For 31 years he ran the Health System legal office. In 2009 he moved into the ObGyn Department to create a program in sexual rights and reproductive justice. He is interested in the intersection between law and medicine. He has teaching appointments in the School of Public Health, where he teaches a class on human subjects research, in the Women’s Studies Department where he teaches a senior level class on reproductive justice, and in the ObGyn Department where he teaches various topics in law and medicine. He has published on sterilization of developmentally disabled minors, reaching agreement on maternity care, and topics in newborn screening and embryonic stem cells in research. He is on an NIH funded committee to study use of dried blood spots from newborn screening in research, a national cancer panel working to create more readable research consent forms, and a State of Michigan panel to look at Hepatis B management in Michigan. He is Chair of the State of Michigan Certificate of Need Commission and President of the Michigan BioTrust for research. 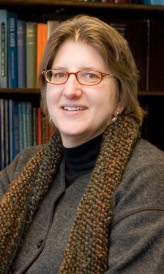 Alexandra Minna Stern, Ph.D. is Professor of Obstetrics and Gynecology, American Culture, and History. She has published extensively on the history of reproduction, gender, sexuality, race, and health. Her most recent book is Telling Genes: The Story of Genetic Counseling in Modern America (Johns Hopkins University Press, 2012) which explores the development of genetic counseling from the eugenics movement of the early twentieth century to the current era of human genomics.  Her earlier book Eugenic Nation: Faults and Frontiers of Better Breeding in Modern America (University of California Press, 2005) narrates the history of eugenics in the American West and won the American Public Health Associations’ Arthur Viseltear Award for outstanding scholarship on the history of public health. Her personal website is www.minnastern.com.

Dr. Timothy R.B. Johnson is the Bates Professor of the Diseases of Women and Children and Chair of Obstetrics and Gynecology. He is also Arthur F. Thurnau Professor, Professor of Women’s Studies, and Research Professor in the Center for Human Growth and Development. His education and training have been at the University of Michigan, University of Virginia, and Johns Hopkins. He is Fellow of the American College of Obstetricians and Gynecologists (ACOG) and Fellow of the American Institute of Ultrasound in Medicine. He is active in international teaching and training especially in Ghana, Africa and is an honorary fellow of the West African College of Surgeons, honorary fellow of the Ghana College of Physicians and Surgeons, and Fellow ad eundem of the Royal College of Obstetricians and Gynaecologists (London). He is author of over two hundred fifty articles, chapters, and books. He has served on numerous editorial boards, study sections, professional committees, societies and boards, and is an elected member of the Institute of Medicine of the National Academy of Science. In 2005, Dr. Johnson was awarded the Distinguished Service Award, the highest honor of ACOG. He is Past President of the Association of Professors of Gynecology and Obstetrics and Editor of the International Journal of Gynecology and Obstetrics.

Lisa Harris, M.D., Ph.D, is a faculty member at the University of Michigan, in the Departments of Obstetrics and Gynecology and Women’s Studies.  Dr. Harris earned her AB in English Literature at Harvard College, and subsequently earned her MD from Harvard Medical School. She completed a residency in obstetrics and gynecology at University of California, San Francisco. After residency she became a Robert Wood Johnson (RWJ) Clinical Scholar. Because so many issues in reproductive medicine have as much to do with American culture as they do with biomedicine, she subsequently earned a PhD in American Culture at University of Michigan. At University of Michigan she teaches students across campus, in the Medical School, School of Public Health, and College of Literature, Sciences and the Arts. She co-directs the senior undergraduate course, “Women’s Reproductive Health,” in the Women’s Studies Department. In her research she examines issues at the intersection of clinical obstetrical and gynecological care and law, policy, politics, ethics, history, and sociology.  She studies the experiences of abortion workers, abortion stigma, conscience in health care provision, and the clinical and ethical consequences of restrictive abortion legislation. She is also finishing a book on the history of in vitro fertilization in which she situates the rise in technological reproduction in the larger social and political contexts of women’s changing roles in society, the contested nature of abortion, and the ongoing erosion of reproductive health resources for the most marginalized women.