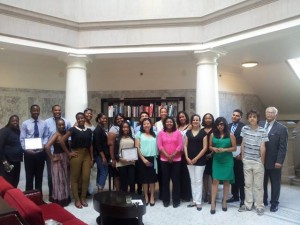 Last weekend, at Black Skeptics Los Angeles’ scholarship ceremony, my colleagues and I had the profound honor of giving scholarships to five brilliant youth of color who are first generation college students.  They are seventeen and eighteen year-olds who have known more struggle and sacrifice than many adults have known in their entire lives.  They have each battled the dominant culture’s view that they are not white, male, straight, wealthy, or smart enough to be genuine college material. They have all seen their neighborhoods—South L.A. communities powered by hard working people, students, activists, educators from all walks of life—portrayed as ghetto cesspit jungles where violent savages roam, welfare queens breed, and drive-bys rule.  They have all mourned the absence of young friends and relatives who did not live to see their high school, much less college, graduation ceremonies. Looking around the room at their bright young faces, surrounded by proud family members, teachers, and mentors, the collective sense of duty and obligation everyone felt toward this next generation of intellectuals, activists, and scholars was evident.

Because the ceremony occurred in the midst of national anxiety over the murder trial of George Zimmerman, it was both a celebration of promise and a bittersweet paean to the burning loss and betrayal communities of color routinely experience in this racist apartheid nation.  Trayvon Martin would’ve been eighteen this year, a graduate of the class of 2013.  He might have been college-bound, anxious, bracing against the fear of the unknown, heady with anticipation about the future.  He might have been mindful of the psychological and emotional miles he’d have to travel to be freed from the prison of society’s demonizing assumptions. He might have experienced all of these feelings while grieving the untimely deaths of his own friends and being told that young black lives don’t matter.

For black people who have had faith in the criminal justice system and due process, it is no longer possible to pretend that black life is worth more than that of a dog killed in broad daylight on a city street.  People who kill dogs—or those who run vicious dog-fighting rings like NFL football player Michael Vick—receive longer prison sentences than do law enforcement officials (or their surrogates) who kill black people.  For a predominantly white female jury that did not see the crushing loss in the murder of a young man pursued by a predator who was expressly told not to leave his vehicle by law enforcement; the life of a dog was apparently more valuable.

This is one of the indelible lessons in “democracy” and American exceptionalism that Trayvon’s class will take with them to college and hopefully spend their lives fighting to upend.

Sikivu Hutchinson is the founder of Black Skeptics Los Angeles and the author of the newly released Godless Americana: Race and Religious Rebels and Moral Combat: Black Atheists, Gender Politics, and the Values Wars.

Related ItemsBlack Skeptics Los AngelesEducationGeorge ZimmermanracismTrayvon MartinYouth
← Previous Story A Statement on the Reclamation of All Black Life: For Trayvon, Marissa, & Jordan
Next Story → Trayvon and George: Why This Case is Really about Women