“Are you listening?” Rachel Jeantel asked defense attorney Don West in the trial of George Zimmerman, as he seemed to turn and walk away from her. As I watched, I somehow felt that Jeantel was asking the question not only of Don West but of everyone out there, and I don’t just mean those in the courtroom. All of a sudden, postcolonial critic Gayatri Spivak’s brilliant but complex and difficult essay “Can the Subaltern Speak?” made existential and not purely discursive sense to me. Spivak is insistent that the category of subaltern should not be loosely applied to just anyone who feels oppressed, or ‘Other,’ or that he or she is not getting a piece of the pie. She defines subaltern as “everything that has limited or no access to the [sic] cultural imperialism.” She also indicates that in the ‘first-world,’ being poor, black, and female qualifies. Jeantel is all three, and, plainly, she does not participate in cultural imperialism but instead was its target in the courtroom. “Clearly, if you are poor, black, and female you get it in three ways,” Spivak says. Jeantel gets it in more than three ways. She is poor, black, female, of foreign descent, visibly obese, speaks dialectic English, and seems to struggle with reading. Clearly, she belongs to a class of people that has been “historically muted,” as Spivak describes it. 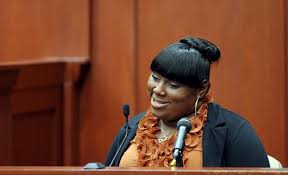 Spivak also describes how, “Between patriarchy and imperialism, subject-constitution and object-formation, the figure of the woman disappears, not into a pristine nothingness, but into a violent shuttling which is the displaced figuration of the ‘third-world woman’ caught between tradition and modernization.” In the more concrete arena of the courtroom, Jeantel was caught in a violent shuttling between the prosecution and the defense, but she refused to disappear. She sat there, sometimes stoically, sometimes edgily, but time after time she insisted on telling her truth.

Without a doubt, Rachel Jeantel was isolated in what Spivak describes as “a space of difference,” her difference marked not only by race, but also by class, education, and appearance. Media pundits and the average tweeter or Facebook-poster alike commented on her ungrammatical phrasing, her choice of clothes, her demeanour, her attitude, all coding for the fact that she is black, poor, and overweight. I thought of Precious, as did so many others, but Jeantel did not invite empathy or compassion so much as antagonism or solidarity, depending on which camp you were in. In her work, Spivak has emphasized the importance of transactional speech, speech that involves both speaking and listening as well as the possibility of response, which is why Jeantel’s question–“Are you listening?”–struck a chord.

Spivak also points out that the intellectual persists in constituting the Other as the Self’s shadow. But Jeantel would not be so constituted and was nothing other than her own Self, her authenticity conceded even by her critics. She refused to be cast in the role of subaltern by West (his last name semiotically resonant), or by anyone else, although West quite evidently saw her as such. Many poststructuralist critics, most notably Michel Foucault, speak to the concept of “epistemic violence,” and Spivak does as well. This is a term that refers not only to the way in which knowledge is created and constructed but also to the tyranny of imposing a knowledge system that is alien and hegemonic.

We witnessed this complex process in action before our very eyes as attorney West kept trying to replace Jeantel’s use of a term with his own understanding of it. This was not simply a brilliant defense tactic. It was West who was lost here, and Jeantel who knew exactly what she meant by a term and how it is used in her own cultural context. At times she smiled wryly as she provided her answers, indicating a superior understanding of a term, one she knew she could not communicate to West, because he just would not ‘get’ it. An example of this is the complex use of the ‘N-word’ within a specific context and culture that gives it an entirely different connotation from the raw manner in which it was and still is used by racist whites. (Remember Paula Deen?)  Jeantel gets that complexity, and West, like so many white people, does not.  In fact, Jeantel struggled to explain not just the meaning of a term but an entire epistemology that did not resonate for West. It would seem that it was West, not Jeantel, who needed the translator that many thought she should have had.

Benjamin Disraeli famously referred to Victorian England as “Two Nations.” Two American nations were in evidence as we saw Jeantel struggle to explain to a white man, north of middle age, what certain terms mean in her cultural environment. But the divide between the two nations here is not along strict racial lines. Many African Americans (Lolo Jones is only the most prominent) disclaimed Jeantel and also scoffed at her, seeing her as playing into stereotypes. On the second day of her testimony Jeantel took to adding “Yes, sir” and “No, sir” to the answers she gave Don West. It was patently clear that she did not mean any respect. The word “Sir” was used with barely contained disdain and contempt.

At one point, she even told West that his suggestion that Trayvon Martin may not have been telling her the truth and may have decided to attack Zimmerman was “retarded.” As Jelani Cobb points out in The New Yorker, “It was not always clear whether West was cross-examining her or vice versa.” I find it interesting and highly telling that so many social media comments are aimed at Jeantel’s intelligence. Ironically, it was Jeantel who seemed to wonder how she could even begin to explain her world to this man who was so far removed from her reality. Plainly, in Jeantel’s mind, it was West who lacked intelligence.

It was Jeantel who was forced to patronize West as he asked, “What culture is that where people describe other people as ‘creepy-assed crackers?’” Jeantel, with a smile playing on her lips, replied “Pervert.” She obviously did not know how to explain to him that the use of the word “cracker” here was not strictly racial, for ‘ass cracker’ can also mean one who engages in anal sex. When Bernie de la Rionda, one of the lead prosecutors, asked Jeantel what her friend Trayvon Martin told her over the phone, she said that he complained about a man who kept watching him. Jeantel said that she then asked Martin “how the man looked like,” and Martin replied that he looked creepy and–Jeantel trails off here and then continues “creepy white…in my language…cracker.” The words “in my language” stand in for “ass,” but what is truly interesting here is that Jeantel uses the words “in my language.” Jeantel speaks English, Haitian Creole, and Spanish, but here she was referring to something else, something larger than any one language.

The point that I am making is not just that she comes from “the ghetto” or that she is from a disadvantaged immigrant community and so on. Of course, that was all in play. I have personally been treated as a little less than bright because I speak with a different accent. Some people assume that because they detect an accent when they first hear me that I won’t know English and will need a translator, at which point I have to assure them that I will be fine because I have a Ph.D. in English, and it is my first language. If this happens to me, someone with an advanced degree, I can imagine the assumptions made about this rising high school senior.

This is about more than speaking or acting in a certain way because you are from “the ghetto.” This is about a colonizing epistemology, an imposition of a way of knowing linked to power; as Foucault outlined, “Knowledge linked to power, not only assumes the authority of ‘the truth’ but has the power to make itself true.”  When Jeantel was forced to admit that she cannot read cursive writing, it betrayed the power of ‘Western’ logocentric knowledge. Perhaps I am reading too much into all this. Perhaps this is just courtroom drama, and esoteric discursive matters are better left out of it. But I think not. Discourse not only frames the courtroom drama but helps us to make sense of its larger implications.

Rachel Jeantel is subaltern in American society, but no one would ever accuse of her of being subordinate. And therein lies the tension between the ways in which she is perceived by society and the ways in which she apparently perceives herself. Interestingly, the original title of Spivak’s essay was “Power, Desire, Interest.” All three were on display in Judge Debra Nelson’s courtroom. Jeantel refused West’s script, but in the end she bore out Spivak’s sad conclusion: “The subaltern cannot speak.” Because she spoke but has not been heard. Even if Jeantel’s testimony is heard and believed by the jury, she has not been heard in a larger sense. Her speech has not been recognized by official structures of power, whether institutional or social. I don’t mean her testimony. I mean the subtext and the meta text. No, we are not listening, Rachel. 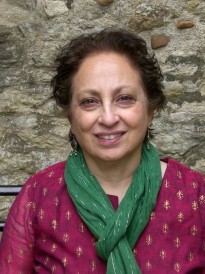 Rashna Batliwala Singh received her Ph.D. from the University of Massachusetts at Amherst. Singh is the author of The Imperishable Empire: British Fiction on India and Goodly is Our Heritage: Children’s Literature, Empire, and the Certitude of Character. She has contributed to Kipling and Beyond: Patriotism, Globalisation and Postcolonialism; Asian American Playwrights: A Biobibliographical Critical Sourcebook, and the Encyclopedia of the Jewish Diaspora: Origins, Experiences, and Culture. An essay entitled: “‘The Art of Conversation:’ How the Subaltern speaks in Chinua Achebe’s ‘Things Fall Apart’ and Joseph Conrad’s ‘Heart of Darkness'” is forthcoming in Things Fall Apart 1958-2008. Singh is also the author of scholarly articles and conference papers on British colonial and postcolonial literatures as well as on multicultural and pedagogical issues. Currently she teaches at Colorado College as a Visiting Professor.