Assata Shakur: She Who Struggles – The Feminist Wire

Assata Shakur: She Who Struggles

Assata Shakur. she who struggles.

Assata Shakur. she who struggles for rupture from colonized thought patterns.

thought patterns choreographed to the legacies of the multi-headed monster of patriarchy, heteronormativity, and anti-Black racism.

Assata Shakur. she who struggles to shatter conditioning that allows for Black ancestral histories to be held in the same breath as broken, wrong, ruin, unworthy.

Assata Shakur. she who struggles so we are able recognize in each others’ eyes our precious Black divinities despite the pain, hurt and trauma.

Assata Shakur. she who struggles for our collective

what are (y)our freedom dreams?

imagination has the ability to distil.

the trajectories of white supremacy are in direct opposition to our Black imagination. from the time we are small we are blasted with the rhythms and sounds of dehumanization, colonial domination, sexist repression and classist tunnel visions.  all for the purpose of silencing our imaginations and desires for freedom.

it is in the interest of hierarchical powers bent on silencing dialogue between Black voices to maintain codes of speaking, relating and interacting by using language alien to our tongues. we keep trying to learn these codes only to have them slip from our hurried grasps over and over again. you see, these powers mutate these codes so often that we never have the time to say to each other, or ourselves, that these ways of speaking, of being, of existing don’t give us voice but i are created to silence us. we are so busy trying to keep up that we have no time for anything else. the best we can do in those situations is to situate ourselves better within systems of white supremacy. this is a losing game. we lose ourselves within systems set up to see us crumble. we still ain’t free.

Assata Shakur. she who struggles to give voice to our imagination.

ideas, images and blueprints for freedom must be created by us.

it is the jazz of Black radical imagination not the codes of white supremacy that puts visions of freedom in our hands.

there is a flow in jazz that necessitates that we are present all-ways.  jazz rejects the predetermined route of subjugation because you are building as you are creating. jazz rejects the institutionalization of practice. you are not bound by a pre-determined path that sees Blackness as inferior and savage. institutionalization of practice is the foundation of colonialism. it is the excuse that  supports policies that want to see Black bodies on the concrete[1]. it is the reason given for occupations of indigenous lands. most damagingly, it is the infiltration of institutionalization in Black radical movements that cause  reproductions of domination. white supremacy has ensured that rather than institutions responding to the needs of Black people, we as Black people are constantly responding to the murderous diatribes of institutions. think police, the prison industrial complex, racist health institutions. best practice then is predetermined – it is outside the people – we are in the margins looking in.  when we react to these systems of governance we are not responding to the will of the people – we are responding to colonialism. when we institutionalize practice our visions for freedom are subordinate to the wills of white supremacy – our freedom dreams are marginalized by the myths created about us by anti-Black sentiments.  All power is outside of the people when it needs to be reconstituted as

ALL POWER THROUGH THE PEOPLE

it harmonizes our pain, memory, thirst for liberation, and trauma

jazz compels us to see the beauty of jagged edges.

Assata Shakur. she who struggles for us to hear the jazz of our lived experiences.

our freedom dreams exist in our every day r/evolutions.

the poetry of Assata Shakur and d’bi young,

the images of Alixa Garcia,

the architectural work of June Jordan as written about by Alexis Pauline Gumbs,

the paintings of Afuwa Granger,

the music of Gabriel Teodros.

these works give word to our complex movements of survival. they give space to our most vulnerable moments. they give image to the sketches of our imagination. they present us with images of Blackness unfiltered by the white gaze.

Assata Shakur. she who struggles so that we may see the art of our survival.

there is power in our stories. there is beauty in our struggles.

there is r/evolution in our existence.

Assata Shakur’s freedom dreams, rooted in jazz, art, imagination, and r/evolution, are such a threat to white supremacy that proponents of it have tried to kill her. her visions, her dreams, and her spirit measured at a worth of two million and the title ‘terrorist’ attached to her name. criminalizing Blackness is the hinge on which white supremacy flourishes.

her existence is proof that we are not defined by the limitations of our oppressions. we are not the sum of colonial parts. we are not inconsequential to history. we are not broken.

Assata Shakur is unapologetically a fighter for Black love and liberation. she is unfaltering in her commitment to your and my freedom.

we must continue her work.

and all others who fight for our liberation.

we must unapologetically and courageously contest for self-determination, interdependence, accountability and love.

collectively we are a viable threat to white supremacy because we are ancestral beauty in the flesh. we fight knowing we come from a legacy of warriors who have survived the harshest of conditions

and still we are here.

“you are the dream your ancestors envisioned, and then bent reality to create.”[2]

we can write our own stories.

so i ask you again, what are your freedom dreams? 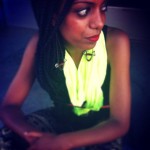 luam kidane is a queer Afrikan multi-disciplinary educator, facilitator, and writer who is currently based in the Occupied Territories of Missisauga of New Credit and Haudenausonee (toronto). she is also the co-founder of NSOROMMA, a Black arts based organization that creates, develops and maintains creative arts infrastructure that supports Black artists and Black communities. luam’s writing has been published by AK Press, Pambazuka, Reuters, and Racialicious.

Related ItemsBlack women revolutionariesfreedom dreamsPatriarchyRevolution
← Previous Story COLLEGE FEMINISMS: Dear Assata: You Are More of a Woman than America Told You
Next Story → Sisters in Struggle: An Ode of Love