Why Do White Guys Hate My Hijab? – The Feminist Wire

Home / Racism / Why Do White Guys Hate My Hijab?

Why Do White Guys Hate My Hijab?

Just last week, I graduated from Wesleyan University in Middletown, CT. A few weeks before graduation, my best friend (the only other hijabi on Wesleyan’s 2600+ student campus) and I were taking one of our infamous long walks (we have preset one and a half, three, and five mile loops) around campus and the surrounding Middletown area. As was typical of our second-semester of senior year conversations, we were venting to each other about the many difficulties of finding post-undergrad work with our liberal arts degrees (she a government major and I a history major) and barely-there networks. As we paused our conversation to cross one of the many streets that interrupt our rather scenic routes, I turned around to “look both ways” when I heard a car honk at us and someone yell, “Take that shit off of your head!” Amused, all I could think was, “Hey look, it’s another one of those white guys who hates my hijab.” Unfazed (and quite honestly, used to such behavior at this point in our Wesleyan careers), we continued on our walk.

The next morning, I had to share this story with one of the librarians at Wesleyan’s Art Library, where I worked. During my shift the week before, much to her surprise, I mentioned to my supervisor how often Middletown residents (especially young white men in their red or white pickup trucks) verbally abused my friend and me when we left campus to walk into town. I even refused to walk into town for dinner the day after the Boston Bombings in fear that I would be attacked, like the many hijab-wearing Muslim women in Boston in the aftermath of the bombings. Horrified to hear what my friend and I go through (even though it doesn’t bother us very much), my boss mentioned that it was common for young white males in Middletown to drive around Wesleyan’s campus in the warmer months to “cruise for chicks” (her words, not mine). That’s when it hit me, “So that’s why these white guys hate my hijab – the way I look interrupts their ‘cruises for chicks.’”  More specifically, the way I dress denies them their privileged white male gaze – a privilege that society has taught them is their right, especially over women of color.

The male gaze.  The white male gaze. That infamous white male gaze. Kind of like the male gaze that permeates Hollywood and cinema. Except in this case, the white male gaze is separated from its objects of desire by car windows, not movie screens. And these young white men in their pickup trucks feel it’s their absolute right to “gaze” at women on and off campus. They drive around Wesleyan to see long flowing hair, short shorts, and even shorter dresses. Our hijabs, long-sleeved shirts, maxi skirts, and maxi dresses disrupt their cruises; we deny them their gazing privilege. And so, through their shielded windows and in their mobile getaways, they feel it’s their right to tell me to “take that shit off” of my head.

I hate to break it to you, white guys, but your male gaze is one of the major reasons (among many others, rest assured) I began to wear a hijab.

And let’s not kid ourselves:  the privileged white male gaze and the verbal abuse it provokes is not reserved for Middletown residents only. Although their remarks usually surfaced when they were under the influence, I’ve gone through the same phenomenon with white fraternity brothers at Wesleyan. On one Friday night in the spring of our junior year, my friend and I were taking a late walk when a couple of white fraternity brothers shouted out of their car, “Take that shit back to India.” I’ll admit, this time the words hurt a little more, mainly because neither of us is from India. All joking aside, it did hurt that these Wesleyan fraternity brothers – who we’ve sat in semester-long seven-student seminars with – felt that it was their right to openly and publically shame us for acting different, all because we choose to dress in a way that does not allow them to see us the way they want to. 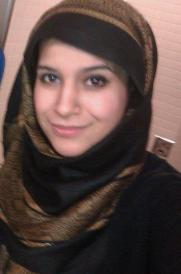 Zainab Khan was born in Peshawar, Pakistan and was raised in the suburbs of Chicago, IL. She is a recent graduate of Wesleyan University in Middletown, CT, where she earned her Bachelor of Arts in History with a Certificate in Middle Eastern Studies. Zainab’s interests include advertising, branding, hijabi fashion and fashion theory, and studying the South Asian and Middle Eastern diasporas.

Related ItemshijabMuslim womenracismwhite male gazeWomen of color
← Previous Story An Open Letter to Kiera Wilmot and Other Black Girls Who Have Considered Giving Up When Their Science Projects and Assata Shakur Are Enuf
Next Story → What You Don’t Know Can Kill You: Race, Class, and Access to Genetic Cancer Testing