Abortion on Demand and Without Apology – The Feminist Wire

Home / Uncategorized / Abortion on Demand and Without Apology

Abortion on Demand and Without Apology

For Every Woman In Every State

The Reversal of Abortion and Birth Control Rights Must Stop Now! 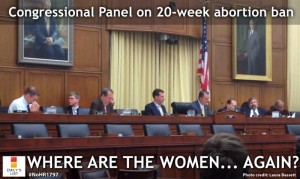 The following statement from the Stop Patriarchy Coalition is in response to the crisis that confronts women’s human rights, women’s self-determination, economic justice and social justice in the United States.  Recently, Christian fascist Congressman Trent Franks introduced a nationwide bill that would ban abortions after 20 weeks into the House of Representatives.  This week, an all-male, virtually all-white Congressional panel voted to advance the bill, flipping  the bird to the right of privacy guaranteed by the 1965 Griswold vs. Connecticut ruling.  Comparing abortion to “the Holocaust and slavery”, Franks attempted to capitalize on the publicity around the trial of former abortion doctor Kermit Gosnell to elicit support for this extreme, dangerous legislation. Although the Ninth Circuit Court struck down a similar bill in Arizona last week, the recent explosion of anti-abortion and contraception legislation has fatally comprised reproductive justice and imperiled the future of women’s health care:

Abortion is an issue that divides this country. This is no accident. How one thinks and feels about abortion flows fundamentally from how one views women.

We recognize that women are full human beings who must have the right – through unrestricted and unstigmatized access to birth control and abortion – to decide for themselves when and whether they will have children. We reject the view that a woman’s highest purpose and fundamental “duty” is to bear children, even those she does not want or cannot care for.

For decades, a movement which calls itself “pro-life” has unleashed violence against abortion providers, shamed and humiliated women, and relentlessly restricted access to abortion, especially for poor women.

Over 80% of abortion clinics have experienced violence, threats, or harassment; eight doctors and staff have been murdered. Today, 97% of rural counties have no abortion provider. One in four poor women who seeks an abortion cannot afford it and is forced to have a child she does not want. Four states have only one abortion clinic left.

This assault has intensified, not slowed, under the Presidency of Obama. 2011 and 2012 saw record new legal restrictions on abortion. Already this year, 278 bills have been introduced to further restrict abortion, including laws set to go into effect that would shut down the last clinic in North Dakota on August 1. Added to this, the Obama administration has defied the FDA and challenged the courts in its determination to keep emergency contraception from many of the women and girls who most desperately need it.

Reproductive rights are in a state of emergency.

If this direction is not reversed, women face being returned to the situation that prevailed for millennia – until only very recently – being forced to subordinate their dreams to have children against their will, or to risk their lives to avoid this. We are headed towards a situation like that in El Salvador where women face long imprisonment for abortion and where nurses and doctors must either turn women in or risk being imprisoned themselves.

This assault on the right to choose abortion is not driven by “concern for babies” or women. The fact is, this “pro-life”movement stands unanimous in its opposition to birth control and comprehensive sex education, the most effective means of preventing unwanted pregnancies. Republican leaders in this movement have fanned hatred of women by shaming women who have sex, belittling the monstrous crime of rape, and in other ways.

The truth is: Fetuses are NOT babies. Abortion is NOT murder. Women are NOT incubators.

For too long, millions have watched in alarm as yesterday’s outrageous and unthinkable attack has become today’s “compromise position” and tomorrow’s limit of what can be imagined. This dynamic must be broken. The political leaders of the Democratic Party cannot be relied on to do this. While posing as the last bastion of defense against these attacks, these “leaders” have in fact seriously undermined reproductive rights by seeking “common ground” with fascists and religious fanatics, by ceding the moral high ground, by severing abortion from women’s emancipation and by refusing to stand up when abortion providers are murdered.

We must rely on ourselves. We call on people everywhere to:

This July and August, there will be an abortion rights caravan traveling across this country to many places where attacks are most severe, including being in North Dakota on August 1st when new laws are set to go into effect that would criminalize abortion after six weeks and shut down the last clinic in the state. We support this action as well as other efforts across the country to defend abortion providers and defeat similar laws in other states. We pledge to resist and call on all who care about freedom, justice, and women’s lives to do the same!

Abortion On Demand and Without Apology!

To add your name to this statement see: http://www.stoppatriarchy.org/abortionondemandstatement.html