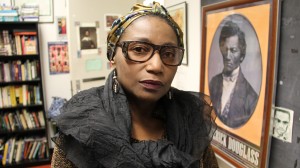 Michele Wallace, Professor of English, Women’s Studies and Film Studies at the City College of New York and the City University of NY Graduate Center, Ph.D. in Cinema Studies, New York University is author of Black Macho and the Myth of the Superwoman (1979), Black Popular Culture: A Project by Michele Wallace (1991), Dark Designs and Visual Culture (2005) andInvisibility Blues: New Edition (2008).  The daughter of the artist Faith Ringgold, she has also written a number of essays on her mother’s work, including American People, Black Light: Faith Ringgold’s Paintings of the 1960s (2010) , “American Black: Faith Ringgold’s Black Light Series,” Nka: Journal of Contemporary African Art, Number 29: Fall 2011, 50-61, and “’We Came to America’” by Faith Ringgold and the Linda Lee Alter Collection of Art by Women at the Pennsylvania Academy of the Fine Arts,” in The Female Gaze: Women Artist Making Their World edited by Robert Cozzollino. Currently working on a collection of essays on Ringgold’s work to be called Faith Ringgold: My Mother, My Muse, My Mentor.

As a graduate student I devoured her words.  In short, I wanted to be the Michele of my field: a black feminist cultural theorist — in Religion — concerned with the function and force of visual culture.  Post graduation, the paralleling of our experiences with regard to sexism, black macho and academe, and an interest in Tyler Perry, brought us together via telephone.  I am ever thankful for that day.  Dr. Wallace was extremely generous, affirming and transparent.  She is a light to Black Feminism, Women and Gender Studies, African American and Diaspora Studies, Film Studies, popular culture, the art world, and beyond.

FWL: Michele Wallace on the journey toward Black Macho and the Myth of the Superwoman (Part 1)

Related ItemsAcademiaBlack Macho and the Myth of the SuperwomanBlack WomenCross-dressingentertainmentMinstrelsyOscar MicheauxQuentin TarantinosexismstereotypesTyler Perry
← Previous Story Gender Policing the Vegan Woman
Next Story → The Princesses of Long Island: A Long Hard Post-Feminist Look in the Mirror