Towards Community Wellness: Healing from Trauma through Yoga – The Feminist Wire

Home / Health / Towards Community Wellness: Healing from Trauma through Yoga

Towards Community Wellness: Healing from Trauma through Yoga

The story I have to tell is one of trauma, yoga, community organizing, de-colonizing wellness, and healing. This story begins in 2001, several months after I was hit by a car. I was alive, but felt like I was dead. In fact, I had spent almost every day of my life from age 16 on feeling dead. Most of my teenage and adult life up to that point had been spent either intoxicated or high; always failing at my attempts to numb the pain that comes from continual abuse by those you love most. My catalyst for healing came in the form of yoga. 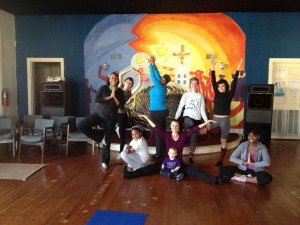 When I finished my first yoga class, I was shocked about how alive my body felt. Had I ever chosen to sit in silence before? Had I ever felt safe breathing slowly? Silence and constricted breathing were two triggers for me and to be in a room full of seemingly peaceful people, choosing this as a spiritual practice, was transformative. I, too, wanted to surrender to meditation and through these dance-like movements, called asana, I wanted to unearth deep-seated emotions, bodily pain, and tension and move towards healing.

That first yoga class was easy. Most sexual abuse and rape victims are experts at detachment and as I reflect back, I know that I wasn’t fully present in my body that year, or even the five, six, ten years after that, at least not completely. Twelve years and a committed yoga practice later—I can still feel trauma deep in my body. There is darkness in my core, in my mind, in between my legs, there is a mass in my chest, and there is a rock in my throat. However, through my yoga practice I am entering into a place of release. Telling my story is also part of my healing.

Pain is a part of my narrative from my infancy through my teenage years. Before turning one, I almost died because of neglect by my father. Later that year, he kidnapped me for several days. At the age of 17, I was continually raped by my boyfriend, which led to a subsequent abortion. At age 27, I came out as queer. For the first time in my life, I felt wholly myself and finally able to be intimate with another person. However, some of my close family brushed off this transformation as “just a phase” and never acknowledged my identity. When I partnered with a heterosexual-identified man and gave birth to a child, I was accepted back into my family with open arms.

At the same time that yoga ignited healing, I also found solace and transformation in my community organizing work. I came into grassroots organizing in South Tucson, working with Latino youth. Later, I found my place and the language of antiracism as a student under white antiracist organizer Anne Braden in Northern Kentucky.  Working to dismantle white supremacy and racism inside of myself and inside the larger social and economic system became another vital part of my healing. Ironically, the culture of social justice organizing was also in many ways the opposite of yoga. 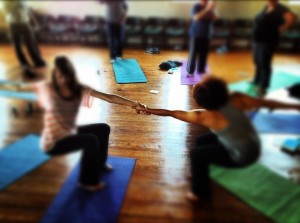 In the nonprofit sector and in grassroots organizing work, I was often swept up in a martyr culture—working to the point of exhaustion, illness, and even death. Some worked this way as a way to avoid their personal trauma, others asserted that they could not rest until justice and freedom for all had been achieved. However, this full-speed-ahead-activism wasn’t benefiting any of us. Many of us suffered from untreated secondary trauma, working with women whose families had been taken from them because they couldn’t find employment, because of mental health issues, because they were undocumented; working with young people of color who graduated from school into the juvenile detention centers because of school tracking, because of racism, because of economics; working with young Appalachian youth who became addicted to prescription pain killers because there were few options after high school if you couldn’t afford college, or didn’t enter the military, and if you wanted to stay in the region.

We worked hard because these injustices were killing our communities, our friends, our families.

However, as organizers, administrators, directors, and fundraisers, we are living, breathing, and replicating a culture of silence around our collective trauma. We sacrifice our families, our health, and our healing for a social justice movement that isn’t enacting the very values in ourselves or with each other that we are working for through legislation.  Now this is not to say there aren’t beautiful moments in the organizing work—there have to be to motivate so many of us to give over our lives so fully; yet the victories do not outweigh the reality of the everyday death we all are moving towards.

In 2012, I left nonprofit organization work and founded Reclaim, a social justice nonprofit. Reclaim seeks to create liberating spaces made up of interracial, multiclass individuals. In Reclaim’s community wellness work, we examine the ways that race, class, gender, and sexuality shape and define our access to wellness services, including yoga.

My white privilege allows me to move in and out of Western holistic health spaces fairly freely; however, I know that many of my closest friends and comrades feel deeply uncomfortable in this majority white, upper middle class, able-bodied, hetero space. Despite passing, there are even times when I don’t feel welcome here. Like when my attire reveals my class status or the instructor only acknowledges heterosexual relationships in their stories, or when male instructors invade my body through dominating adjustments, the yoga studio becomes a place of traumas re-lived. However, I know that my experiences aren’t the same as people of color, low-income, trans-identified, or even those who cannot physically move in the ways that I can.

For years, I have critiqued the white supremacy within Western yoga studios—this same place where I began my healing journey. While I apply antiracism in my community organizing work, I still struggle with how to best integrate it in a larger way in the Western yoga world. In my community and activism work, I struggle with how we can collectively pause long enough to integrate more wellness and healing into our movements for social change. 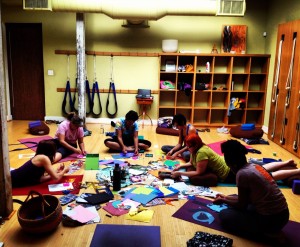 Back in the community center in East Knoxville, through Reclaim’s community wellness efforts, it was a community of non-yogis who created the most yogi-like circle I have ever been a part of. It wasn’t about the way our bodies moved, or how long we were able to meditate sitting completely still. It was about revealing ourselves to each other, our trauma from racism, sexual abuse, and oppressive work cultures. This was about community wellness for community transformation and liberation. Throughout my work with Reclaim, I have witnessed time and time again that it’s not about taking yoga off the mat—it’s often not about being on a mat at all. Yoga happens when we open up to the possibility of being truly ourselves, vulnerable, imperfect and fully broken. Wellness, spiritual connectivity, and community wellness is radical because it counters a culture of silence, a culture of suppression and oppression, and reveals a culture where we can be more fully ourselves in our fully broken states.

The question remains: how do we bring more of this kind of transformation into the Western yoga studio and more radical wellness into our community organizing work? For me, that is the healing work ahead.

All About Love, New Visions by bell hooks

The Spiritual Activist by Claudia Horwitz

Trauma Stewardship: an Everyday Guide to Caring for Self While Caring for Others by Laura van Dernoot Lipsky with Connie Burk

Awake in the World: Teachings from Yoga and Buddhism for Living an Engaged Life by Michael Stone

Jardana Peacock is a 200-hour certified yoga teacher and has been an artist/activist and antiracist educator for over a decade. She is the founder of Reclaim, an organization that focuses on health and healing for a just world and offers individual and community wellness services and programs integrating her wide-ranging experiences.  She practices Ashtanga Vinyassa yoga and teaches classes in yoga studios and in community spaces in Knoxville and regionally. You can learn more about her at www.jardanapeacock.com and at Reclaim’s Facebook page.

Related ItemshealingHealthTraumaViolenceWhite Privilegeyoga
← Previous Story An Open Letter to Facebook
Next Story → Are All the Women Still White? Kermit Gosnell, “Back Alley” Abortions, and the Politics of Motherhood