Dear Mr. Yadav, I too am an Indian Woman

“Referring to the recent ‘Slut Walk’ held in the Capital, Mr. Lalu Prasad Yadav said we had naked women walking down the streets with tattoos on their cheeks, whereas Indian women did not even look up while walking.” 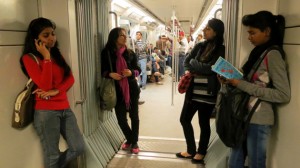 I remember only the wet earth, after a flood or a pipe-burst, grey soil

growing red, its greedy drinking. I remember the stickiness of my soles.

Yesterday, a man boarded the subway, smelling of mountains and chalk-dust.

Five centuries ago, he did not understand his neighbors; they seemed to

want to give. Five centuries later, he thinks I want room in his bed.

Don’t you see the spiders crawling up my bones?

into cloth – this is how I’ve spun for centuries. This

is how we drove the Brits out.  Thread by thread, look.

This back has carried wood, water, children, stories,

the shock of orange against pink, sounds

of roosters and broken bus-horns. In years

of wandering, it has never seen beige.

Why are you hiding from color?

I am not afraid of disfigured children

that are not mine. Therefore,

I may never give birth.

I remember a pebbled earth.

I delivered my first child with my socks on, so they wouldn’t see

my wounds. It was a hospital for healthy people.

Her voice grew loud inside her

the wall, took root with the banyan.

We have all tried rolling it back

into her throat. It has steadily refused.

On the highway, sitting ghoda-taang on the motorcycle

behind the man I love – no one to notice. Closer

to the village, side-saddle. A woman you can trust

to educate your daughters. I will live in between. 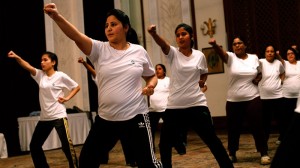 It was only a pause, a kind of photo

taking. A moment to remember

before I knew how easily he’d give up

our daughters, how little he understood

of their creased throats, shrinking

there was no returning to a city

where my husband had not proposed

the rape of our daughters. But don’t

we all look back, sometimes? Besides,

I was always made of salt.

(it is the opposite

of dying). I chose 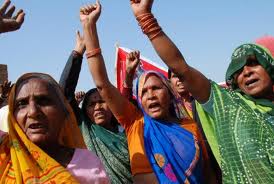 The Little Mermaid Was Indian

That is the part they got wrong ― the blue

eyes were only the sea turned inward. The darkest

skin will pucker into white underwater. It does not

make me less of who I am. I grew up worshipping

a woman proved pure by burning. Can you blame

my grandmother, then, for her counsel about pride

and pain? Everyone, from married aunts to rapist

cops and shaadi.com, warns me of the danger

of my voice, promises men will love me

for my hips and eyes. The tongue was not a sacrifice.

It was a price for immortality. As for the prince,

I know a man who does not notice bleeding feet

is never worth them. It was never about him.

But don’t we all tire, sometimes, of the colors

we grow up with? Even as a girl, I loved being

something else. Travel is the greatest disguise.

Murder did not scare me, but I knew

an Indian woman who leaves for love

of adventure, or man, or horseback lessons, never

returns. The father grieves from a distance, won’t

swim to her shore. The grandma is always losing

hair. It is a constant choice between love

and family. That is the ultimate sacrifice,

the absence of guarantees.

[1] The title, “Not Being a Man, I Bleed Like This,” is a line from Bhanu Kapil Rider’s book “The Vertical Interrogation of Strangers.” This poem was written in response to the questions Rider put to women of Indian descent for that book.

Aditi Rao has worked extensively in the youth development and social change arenas, particularly in examining the role of the arts in social change. Aditi’s poetry has appeared in Four Quarters magazine, Muse India, Cha: An Asian Literary journal, and other publications, and her essays have been featured in People Building Peace 2.0 (published by the Global Partnership for the Prevention of Armed Conflict), Moments that Speak: Images and Stories of Connection (published by the Earth Charter Initiative) and InfochangeIndia. Her first full-length collection of poetry, The Fingers Remember, will be released later this year. Winner of the 2011 Srinivas Rayaprol Prize for Poetry and the 2013 Toto Funds the Arts Creative Writing in English Award, Aditi currently lives in New Delhi. For more, visit: http://aditirao.net

Related ItemsArts & Culturefeminism and racefeminist poetryPoetrywomen women of color
← Previous Story COLLEGE FEMINISMS: My Journey to Feminism: How Feminism Inspired My Life
Next Story → Are All the Women Still White? Kermit Gosnell, “Back Alley” Abortions, and the Politics of Motherhood