Fear and Convenience – The Feminist Wire

“Did he hurt you, in a new way?” —Fear and Convenience, Thao Nguyen

And you were finally free to call yourself gay.

Fifteen years after your mother first asked you, in front of your extended family, in a red-decked Chinese restaurant, if you were a lesbian—and you said no. Four years after you decided you would no longer go to Church—God was the first person you stopped pretending for. Two years after your last heart-grinding bout of anxiety left you with a car’s front tires over a felled tree and a hydrant of snot down the front of your chest.

After all that, you were free.

You are gay. Of course you are. You left all your homes. You found the city where the gaywads go to grow old and happy. You are ensconced in the safest community you have ever been a part of. The bravest, brashest, hardest people. You read Audre Lorde and Autostraddle. You listen to Rachel Maddow and Erykah Badu. You don’t shave. You wear a beanie and chunky man-belt to really make your point. You connect almost only with women—the more unapologetic, the better. Just this past summer you had sloppily real feelings for a dumpster-diving, guerilla-gardening, rent-evading kind of gal. She made you feel young like you never were.

So if all this is true, why you trippin’?

He came into the picture.

Like a bad romantic movie. The kind where the heroine has hair like a possum and inconsistent toenail hygiene. He came in with his pre-teen son, which is how he first registered as Safe. He was taking his son swimming and you folded their towels, as you get paid to do by the hour until your feet ache up to your shoulder blades. He gave you a sidelong smile, his hand on his son’s back, as they walked on by you.

Then he started to talk to you on his own, once, twice, each time he came in. He always had plenty to say. You threaded his steady stream of anecdotes with funny one-liners, but mostly, you just listened. When it came to conversation motors, he was a locomotive and you were a wind-up duck. Despite yourself, you were a charmed wind-up duck.

He made jokes about finding you attractive. Said you should be a supervillain. Poison Ivy. Said your next tattoo should run down the length of your back because “it would look gorgeous when you’re lying on your side.” One day he just dropped the humor and held your gaze. He said, bravely and simply, “It’s always good to see you.” And something inside you blinked like a keyhole.

You always were supposed to end up straight. As in, Mrs. You grew up knowing how well Julia Roberts movies did in the box office because you cared that much about her Fairy Tale. You used to shave your legs—fronts, backs, and upper thighs—in case you met a boy who would want to touch them. Your mother has always loved men, barebacked and messy. Your grandmother, then a schoolteacher, swan-dived into a—if not arranged, then clearly blueprinted marriage. Your aunt devoutly obeys a fringe religion of self-deprivation that your uncle controls.

Submission runs in your family, don’t you know? You were born with a cunt—you should learn to lie down.

It was a relief to name yourself gay. It was a reprieve, a magic trick, a coup. You would not become one of your family’s women.

So why does your stomach clench for this man? It is not his anatomy that sours your attraction to him. He can be as cis-gendered as the parade is long—a queer girl could deal. It is his privileged brand of maleness that you can’t ignore (athletic, educated, amply represented). It’s his age (in his fifties). It’s the seeming certainty his wealth and whiteness endow him with. Why do you want this man? Of all men, why do you want the Father?

Maybe you are not the kind of partner who deserves lesbians. You hate the way these bright women ask questions, to get to know you, to unearth and pardon all your shames. You hate intimacy—boring truth: you are afraid of it. You are passive, bland, dismally unwilling when asked to self-disclose. You are used to taking cues from a man, keeping your patter short, deferring air time to him. With women—women who listen, women who try—you are unrelevatory and soon irrelevant.

You think of what the woman from the summer told you, after you copped to your feelings. With a half-smile, she said, “My nephew would think you’re cute.”

You had to walk out of the room. But you knew she was right. You were groomed to exude a specific appeal.

You have a sexually mainstream body (thin, able) but are not forwardly sexual. You support yourself financially but have no ambitions for power. You are monogamous by nature but would never make demands for commitment. You are exactly the sort of waif who belongs with a chin-stubbled nephew. Or a slow-smiling brother. Hell, bring in the cardigan-and-corduroy uncles! You can consider them all because she does not want you.

By wasting all your life learning to be the Perfect Woman, have you forfeited the qualities that draw her to you?

So it is that this man comes into your work and sees you as worth a few minutes of flirting. He is comically oblivious to how he triggers you. You have daddy issues and money issues, and the landmines are quivering. You wish you didn’t daydream that he will rescue you from the tedium of scraping for rent and the otherness of living as queer. There is an attraction and a resistance and your own damning complicity.

You want someone easy. Someone with no expectation for you to be interesting or big. Someone who would be uncomfortable with your secrets so you know off the bat not to tell him that sometimes you feel fat at 105 pounds or that once you cried every day for two and a half years. You have always been ashamed of yourself, for every reason, for no reason. And you don’t want to talk about it. You want someone who just asks that you laugh and you listen.

And when you look at him, with this buzzing in your mind, what you see about yourself is this: There is no freedom in your selfhood—not when you are this young and unconstructed. There is just navigating the courtyard with ready fists and open eyes, alert with the need to always be smarter than your impulse to self-destruct, when the gates open and you forget to walk out, when you are attracted to people you can give your power over to. 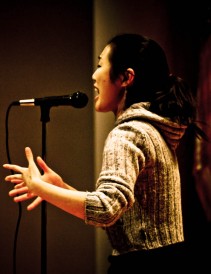 Anis Gisele lives in Seattle, by way of Manila, Philippines. She has been featured as a spoken word artist at venues such as the Spenard Jazz Festival, Ladies First, and the Bent Mentor Showcase, as well as numerous classrooms, community workshops, and private events. She makes her income tutoring teens, cleaning houses, and folding your pool towels. Her work has previously appeared on Black Girl Dangerous (Mia McKenzie is a hero) and Another Passion. She is alive and writing because of strong queers, radical artists, and chosen family. She is currently working on her first novel and also, forgiveness.