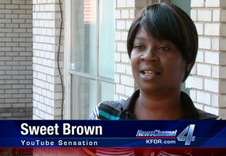 harles Ramsey, the hero who recently rescued Amanda Berry, Gina DeJesus, and Michelle Knight from a decade of captivity, has become the latest in a new trend of unwitting viral video stars.  As Aisha Harris has noted, Ramsey joins Antoine Dodson, Sweet Brown, and Michelle Clark as a YouTube sensation, generating millions of views and various adaptations of his interview with a local media outlet following his heroic act.  Harris observes: “It’s difficult to watch these videos and not sense that their popularity has something to do with a persistent, if unconscious, desire to see black people perform.” In the cases of these viral video stars, the desired performance is clearly comedic, based in black working-class uses of language and choices of loungewear.

The widespread appeal of black comedic performances has a long history in the United States.  Since the minstrel show was popularized in the nineteenth century, (white) Americans have used laughter as a way of undermining the voices of black people and thus circumventing uncomfortable discussions about race and our society.  If we laugh at—not with—the characters we imagine these people to be, then we can avoid and deflect the biting social commentary they offer.  More specifically, we can continue to ignore the critical voice of a specific socioeconomic class of people, laden as that voice is with deep knowledge of the intricate workings of American social, economic, and political systems as they inform our daily lives.

These new viral characters are formed through countless spliced, dubbed, replayed video clips online, as well as through the mocking commentary that follows. They become the modern version of the minstrel as we strip them of all but their hilarious “Afro mullet” or do-rag and turn their colorful uses of language into hollow, auto-tuned refrains. We, as a country, have not yet figured out how to take seriously Charles Ramsey’s contention that if a “pretty white girl” runs into the arms of a black man, something is wrong.  We don’t know what to do with Antoine Dodson’s warning to “hide your kids, hide your wife” from a rapist who has not been apprehended.  We lose the heroism and the critical perspectives of these people as they are necessarily emptied of meaningful discourse and turned into caricature.

This move is necessary in order to perpetuate America’s image of itself as safe, as equal, as a post-racial, melting-pot meritocracy.  That is to say that if people such as Charles Ramsey were allowed to be heard, to be taken seriously, then we would all have to confront an America in which white women are taught to avoid black men at all costs, in which women and children are not well-protected from sexual violence, in which a host of other less-than-pleasant scenarios are realities. 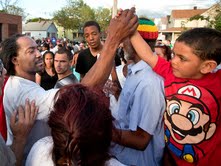 This is not an America that could sustain the “American Dream,” our society’s ideal vision of itself, and so it is not the America that those privileged enough to ignore its realities often choose to see.  In order to maintain this blindness, people in positions of privilege must silence heroes like Charles Ramsey, along with all others offering similar experiences of America; namely, racial and ethnic minorities, people of the working class, and women, among others.  When, for an instant, the media gives a formerly silenced person a platform from which to speak, people of privilege quiet that person with humor and with song until s/he submits to tap-dancing off of America’s stage.  And at that moment, they offer that person applause; for s/he has played the correct part in the performance of “America” that people of privilege so deeply desire to see.

If we, as a country, want to do better, we can begin by recognizing how heroism and humor are inflected by race, gender, and class status.  We can show respect and appreciation for people who do the right thing despite the potential personal costs, as Melissa Harris-Perry and W. Kamau Bell discussed on FX’s Totally Biased, and Eris Zion Venia Dyson so eloquently did in her “Open Letter to Charles Ramsey.”  Most importantly, when formerly silenced people get the chance to speak, we can help them to be heard and then deal with the true implications of what they say, regardless of how unflattering those words might be to our collective self-image.  We can save our laughter for comedians and allow heroes to be heroes.

Related ItemsCharles Ramsey
← Previous Story The Rise of Beyoncé, The Fall of Lauryn Hill: A Tale of Two Icons
Next Story → “Somebody’s Children”: A Conversation with Laura Briggs