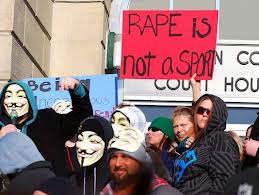 The true tempo of my college’s student body occasionally emerges on a double-sided sheet of paper that circulates around campus five days a week. This “alternative” student newspaper accepts the unfiltered content of anybody who submits something, providing it’s received before the 6 p.m. deadline. Usually students just e-mail notifications about their lost North Face jackets, but every once in a while, somebody writes something that rattles people to alertness. Two years ago, one of the editors thoughtlessly published a “why did the chicken cross the road” joke that ended with a punch line about rape. While this comment alone was problematic, it was a direct response to a student who had written in about her personal experience as a victim of sexual assault.

Less than twenty-four hours later, students, faculty and staff gathered around the flagpole on our academic quad. One by one, impromptu speakers stepped up, positioned the bullhorn, and declared how our college does not tolerate rape culture in any capacity. A spirit of ‘60s rebellion energized the crowd – for about the first twenty minutes. Eventually, all the speeches sounded vague and repetitive. Students started fidgeting with their backpack straps and checking their cell phones. An hour later, after one last burst of enthusiasm during a concluding chant, the crowd dispersed. People continued on with their days. 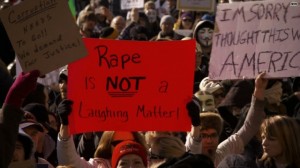 Nobody was naïve enough to expect our little rally to make a dent in any larger context. Clearly, two years later, the Steubenville football players convicted of rape hadn’t heard the cries at my college’s flagpole. The people at my college who needed to hear that rally were not the ones who attended. Yet even then, the question lingered. Had it accomplished anything at all? And if not, why?

Perhaps the answer was best articulated, even if accidentally, in my women’s studies class the next day. We were discussing cultural elements that allow for a normalization of rape and sexual assault. A male student, slumped in the back row, raised his hand. He rarely talked, but that day he apparently felt like sharing. He claimed that education about rape, including how to avoid it, was already widely available. Everybody, from potential perpetrators to potential victims, already had access to this information. That said, there’s simply nothing more to do than provide the facts and hope people internalize them. A few students scoffed and frowned, but most remained neutral and unengaged. I glared at him. I also congratulated myself on how I was so much more informed, and politically correct, than my classmate. Yet, not to offer a “meta” criticism of this essay, what did I actually do to confront sexism, besides write about it? 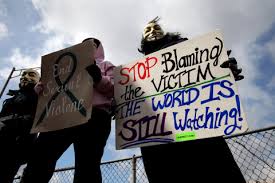 I was even getting tired of the same old feminist arguments. Just a few weeks ago, while reviewing submissions for a literary journal at my college, I actually rolled my eyes at a first-year student’s paper. She wrote about how Disney films perpetuated sexist stereotypes, as if she was pioneering brave new scholarly territory — as if she was the first person to ever approach Disney with a feminist lens. After four years of writing papers about patriarchy, and talking in class about the virgin/whore dichotomy, I apparently decided that I had conquered sexism — simply through relentless awareness. Although I would never consciously admit this absurd conclusion, I had to consider the implications. If people like me and my male classmate thought education was enough, then progress for women, along with all groups under patriarchy’s shadow, was going to inevitably plateau.

As an English major, I am no stranger to the rickety bridge between scholarly musings and practical applications. While my papers are based on literary texts, they ultimately wheel around in abstract, nebulous hazes. Nobody even reads them except for my professors. While the gap between essays and reality is usually harmless, the dissonance between classroom discussions and everyday behavior is alarmingly wide. Chances are, the kid who wrote the rape joke also composed a paper about what’s good about patriarchy at one point. Girls who grind at “CEO and corporate hoes” parties have probably referenced the dominant male/submissive female binary in at least one of their essays, too. I, on the other hand, scroll through a convenient mental rolodex of “liberal arts” phrases that sometimes get tangled in foggy abstractions.

I’m not citing myself as a pivotal cultural influence, or anything close, but perhaps my habits reflect a deceiving agreement. As my male classmate so eloquently demonstrated, while a dangerous mentality of inequality still exists, it seems okay to simply write about feminism, sexism, patriarchy and rape. As mentioned, I too have fallen into the habit of allocating my musings on patriarchy to academic papers and classroom discussions. If I genuinely wanted to discuss feminism in a more casual capacity, I’d sound like I was, frankly, kind of whining. All my friends have sat through the classes. They know about the oppressive patriarchy and its evils. What else could I add to the conversation? Plus, despite a lingering disparity between the sexes, women have it far better than they did even forty years ago. We no longer have hunger strikes for suffrage or equal wages. Feminist arguments are somewhat submerged in our national psyche. They are now a part of mainstream culture.

However, obviously this theoretical rhetoric has not yet instilled itself in collective action. Misogyny still exists in very real ways. Two years after my college’s flag pole rally, the Stuebenville rape case has catapulted underlying issues to national headlines. This culture of acceptance permeates freshman dorms where guys joke about a “rape closet.” A male acquaintance of mine, who happens to be an advocate of conservative social values, refers to feminism as a pseudo-science. He claims he once made a women’s studies professor cry by “using logic.” Of course, we women are not innocent either. Female students on my campus sometimes feel discouraged against coming forward as victims of sexual assault, fearing judgment even from their friends. Commentary such as “well, they were both really drunk” or “she was dressed like a slut” are not unheard of. This perpetual mindset of dismissing women, to which both men and women subscribe, extends across a spectrum of sexism.

I’m not paralleling victim blaming to less severe issues, though an enduring acceptance of patriarchy is present in pockets of campus culture, as well as all over the country. Over the course of my four years here, I’ve heard a handful of classmates freely admit how they were getting their “MRS degrees.” They’ll go through the motions of attending class and composing papers, but ultimately, they are investing in a future that renders them dependent upon a husband. Off campus, we see the implications of the dominant male/submissive female binary that I’ve summoned for so many academic papers. Women are still paid 77 cents for every dollar their male counterparts earn. African-American women are paid 62 cents, and Latinas just 54, according to nonprofit advocacy group, The National Partnership for Women Families.

The paradox exists in the claim that awareness about the enduring patriarchal structure is only the first step. In articulating this concern, I still remain at that first step. I haven’t circulated a petition or conjured up another flagpole rally. But that’s the thing. Actions against oppression don’t have to consist of grand, sweeping gestures. I don’t have to stand on a metaphorical soapbox, but I’ve realized that people can change their actions to confront patriarchal norms on an individual level. I have to learn not to self-consciously shoehorn into cramped corners when I hear jokes about “hating patriarchy,” or every time I note subtle sexism in a commercial or a classmate’s comment.  It’s important to call it out, notwithstanding how uncomfortable.

Only after we fixate a progressive mindset on an individual level, can we overcome collective complacency. Still, despite the insulation of some liberal arts campuses, activism is alive and well. The scales of justice are finally appearing to tip towards marriage equality, and our country genuinely seems to be arching towards progress. But even now, as I catalogue statistics and anecdotes, I find myself teetering toward generalizations and abstractions, as if a professor will read this. Yet at the same time, an education about hegemony is better than the alternative silence. Exposing students, and the general public, to the dynamics of patriarchal power has to be the first step. It has to create a foothold. I can write all I want about how people should transcend stereotypes, gender binaries, and patriarchal parameters. But at the end of the day, words mean very little when they do not match up against actions. However, maybe I’m just biased because I’m an English major, but words are the place to start.

Natalie Olivo is a senior English major with a creative writing concentration and a history minor. She contributes to her college’s magazine, as well as InYourSpeakers Media. She hopes to pursue a career in publishing or journalism.