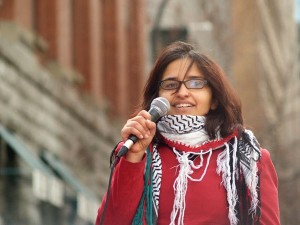 Harsha Walia is a South Asian activist and writer based in Vancouver (Indigenous Coast Salish Territories) in Canada. She has been active in anti-racist, migrant justice, Indigenous solidarity, feminist, anti-imperialist, and Palestine solidarity movements for over a decade, including with No One Is Illegal, South Asian Network for Secularism and Democracy, Defenders of the Land, Women’s Memorial March Committee for Missing and Murdered Women, Olympics Resistance Network and more. She is formally trained in the law, is the co-creator of a short film, and is the author of the upcoming book Undoing Border Imperialism. Find her @HarshaWalia.