First To Die: Evil Dead and Blackness in Horror – The Feminist Wire

First To Die: Evil Dead and Blackness in Horror 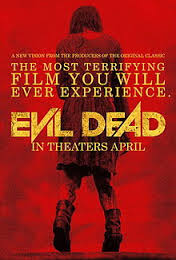 The victor in this weekend’s box-office battle was Evil Dead, the remake of Sam Raimi’s 1981 cult-classic horror film, which roared into first place with a better-than-expected $26 million take, and won far better critical reviews than are typical for horror films. Like the majority of remakes, the new Evil Dead tweaks the original, adding contemporary flourishes while honoring Raimi’s foundation. Perhaps the most interesting of Evil Dead’s departures from its source material is director Fede Alvarez’s choice to put a black character in harm’s way—all of the characters Raimi’s film were white. And by including a black character and giving that character her particular arc, Evil Dead reinforces a central concept of the horror universe, one that is far more complex and empowering than it appears at first blush: the black person always dies first.

It isn’t revealing too much to spoil the fact that Evil Dead’s sole black character Olivia (the stunning Jessica Lucas, of Haitian descent) is the first to die when demonic forces descend upon the ramshackle cabin where Olivia and her group of friends are trying to help Mia (Jane Levy) kick her opioid addiction. Olivia befalls the same fate as nearly all the characters, losing her agency to a demonic possession and attacking one of her friends, who savagely kills her in self-defense. But for the film’s superlatively graphic and bloody campaign of violence to begin with Olivia’s death is a fascinating choice.

Consider that Evil Dead is a remake, one that contains dog-whistle references to Raimi’s film to tickle the purists. In making those subtle nods to the original, Evil Dead shifts slightly into meta-horror, the winking subgenre that incorporates the idea of horror films into its narrative frameworks. Granted, Evil Dead isn’t nearly as self-referential as last year’s The Cabin in the Woods (a clever horror deconstruction that cribs liberally from Raimi’s film) or 1996’s Scream, which reenergized the horror film as both a box-office and cultural phenomenon by mounting a slasher story in a world well-aware of the genre’s cheesiest tropes. Those tropes include designating the person with the most melanin as the first to die, which makes the choice to do it in a contemporary, pedigreed horror film like Evil Dead all the more curious. As if attempting to remake one of horror’s most beloved films wasn’t enough, Alvarez included one of the genre’s most shopworn story beats.

To be fair, the idea of the black character dying first in horror movies is more a widespread cultural notion than a demonstrably rigid rule, one of those ideas that an observational comedian presents as holy writ. Black characters don’t invariably die first in horror movies, but there’s affinity for the idea that they do, and the idea has permeated the genre. There are examples that bear out the notion—like The Walking Dead’s tendency to kill off one black character before adding another—but in plenty of horror movies, black characters get out alive, and often don’t exist at all. Take Scream, for example, which features no black characters, only white high schoolers trying and failing to use their knowledge of horror cliché to outwit an actual masked, knife-wielding psychopath.

But the entrenched idea of The Black Person Dies First is addressed directly in Scream’s ultra-meta sequel, which gives into the trope and mocks it with equal aplomb. Its prologue features Maureen and Phil (Jada Pinkett-Smith and Omar Epps), who we first meet as they bicker about the slasher flick he’s chosen for their movie date. “It’s a dumb ass white movie about some dumb ass white girls getting their white asses cut the fuck up,” Maureen says. “I’m just saying that the horror genre is historical for excluding the African-American element.” In the theater, Maureen yells at the imperiled blonde onscreen to use some common sense in dealing with a threatening caller: “Hang up the phone and star-69 his ass!” she yells. It’s a clever wink at the stereotype of the interactive black moviegoer, which is relatable for anyone who has ever watched a horror movie with a black audience. Maureen and Phil still wind up as Scream 2’s first casualties, which reinforces the Scream series’ central premise: it’s one thing to have an idea of the shrewd, logical choices you’d make in a life-or-death situation, but another entirely to make those choices in the moment. Later, Joel (Duane Martin), a black cameraman sent to cover the murder spree for the local news, bows out when the body count gets too high and isn’t seen again until the killer has been vanquished. He seen enough movies to know people who look like him don’t last in these situations.

Academic critiques of the horror genre abound, but they almost exclusively explore the gender politics of horror films, a topic mined in such books as Carol J. Clover’s “Men, Women and Chainsaws” and Barry Keith Grant’s anthology “The Dread of Difference.” That’s understandable, given how much of the genre relies on violent men preying on defenseless women, and how little of the genre involves black people, who, even when they are included, are tend not to measurably shape or impact the story. Robin R. Means Coleman’s “Horror Noire,” a social history of blackness in horror, was released in 2011 and is the first long-form academic critique of its type.

It’s a shame that the topic of blackness in horror has been written about so scarcely, given how rich a discussion it is. Horror films are light on characterization by design—why get too familiar with someone who will be hanging from a meat hook shortly?—which has an equalizing effect on the characters irrespective of race. In horror, everybody is just a body. Given the interchangeability of the characters, it’s noteworthy when black characters tend to die first, especially when the indiscriminate nature of the killer’s actions derives much of the terror. The horror universe is one in which black characters are seldom afforded the opportunity for survival, heroism or love.

It can be troubling to watch this trope, as real-life horrors such as the murders of Sean Bell and Trayvon Martin buttress the deeply unsettling idea that the American culture-at-large judges the value of human life subjectively, and the black and the brown are considered expendable. That idea is what makes the Black Person Dies First trope both painful and oddly vindicating. It is at once horribly racist and an acknowledgement of horrible racism; a rare admission that, yes, in America there still are and always have been spaces in which black bodies aren’t considered as valuable as white ones. When we pose questions about why there’s 24-hour news coverage of a missing white woman, when black women go missing every day to little notice, we do so already knowing the answer.

There’s another interpretation of the Black Person Dies First trope, though, one that explains why a genre that makes such little space for the black perspective is able to command such large black audiences. (The audience I saw Evil Dead with was almost exclusively black, and they seemed to get a kick out of it, notwithstanding Olivia’s early demise.) Watching Evil Dead, it occurred to me that the horror movie universe is one that thinks little of the black body, but thinks highly of the black mind; it’s a genre in which black people have intellectual, or at least instinctual, primacy.

The horror narrative is designed to lure its characters into dangerous situations so they can be killed one at a time, and doing so often means forcing those characters to make choices that are inconsistent with basic common sense. One component of the narrative is the period of skepticism, the early part of the story where some odd, portentous stuff has happened, but well before the point at which all hell breaks loose, when anyone would know it’s time to cut the cabin trip short. Horror movie characters are most often victims of their own denial. By refusing to acknowledge the possibility that something terrible is happening, even as people go missing indefinitely, they wind up making choices that give the killer the upper-hand. The second biggest cause of horror death behind denial is hubris, seen when all hell does break loose, and the characters start making the illogical decisions that inspire black audiences to yell out smarter alternatives. Maybe take someone with you when you go into that darkened shed? Maybe stop running for a moment, long enough to take off those heels, then continue running? Maybe don’t assume the killer isn’t going to roar back to life just because you’ve knocked him unconscious?

The black audience is engaged with this narrative not in spite of our lack of involvement in it, but because of our lack of involvement in it. The black person who dies first in a horror movie doesn’t get much screen time, but he or she gets the distinction of having made the most sensible choices a person could make prior to knowing people are being killed. It is in the absence of the black sacrificial lambs that the horror movie, for black audiences, becomes its own comedy of the oppressed, as silly white people line up to be slaughtered instead of coming up with a sensible escape. The black audience infers that if there were black people in the movie, they would have the good sense to get out of the situation alive, or that the black person who died first would have lived if he or she had known the stakes at the time. This black experience of horror is informed by our collective pride in how much we’ve endured in this country, and the idea that the black experience has steeled us and ingrained in us a survival instinct that white people lack. To the degree that we view suffering as redemptive, horror allows black audiences to feel like if there’s silver lining to the struggles we’ve faced in America, it’s that we would know what to do if a maniac in a clown mask showed up wielding garden shears.

It’s unsurprising that black audiences flock to horror movies, because they are essentially race-reversed minstrel shows. They allow blacks to laugh, jeer and eye-roll at the foibles of cartoonish, two-dimensional whites who walk wide-eyed to their deaths. They do so because, unlike blacks, they aren’t armed with a palpable sense of their own mortality which, even for the latest of bloomers, takes root no later than puberty. Olivia may die first in Evil Dead, but her mercifully short involvement in the carnage is a welcome respite from the real-life violence that all-too-often involves devalued black bodies. For black folks, the police blotter from an average July day in Chicago is a horror movie. Evil Dead is just a fun night out, gorging on popcorn, yelling at the screen and wondering why these white folks will never learn. 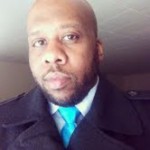 Joshua Alston is a writer, reporter and journalist specializing in coverage of arts and culture, politics, race, religion and gender/sexuality. He studied journalism at Syracuse University’s Newhouse School of Public Communications. He spent five years as the television writer and critic at Newsweek, where he also contributed to coverage of national affairs and trends and edited reader-submitted essays. His work has also been featured in Vibe, Vanity Fair, The Guardian and The A.V. Club. He lives in Philadelphia, PA.