Defense of Marriage: Racism, Family Values and the 99% – The Feminist Wire

Defense of Marriage: Racism, Family Values and the 99% 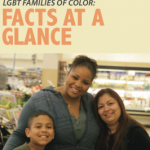 As the lead attorney for Proposition 8 trotted out the standard Christian fascist “marriage is only for procreation” party line before the Supreme Court yesterday, I was reminded of a 2012 Los Angeles Times story about the changing demographics of California families.  The article leads with an idyllic portrait of a white lesbian-headed family whose daughter is asked “on a leafy drive…at a newly renovated home with cathedral ceilings and a backyard pool” why she has three mommies.  According to the U.S. Census, families are becoming less nuclear, headed up by more single parents, childless couples and LGBT couples with children.  Yet family diversity is only a revelation in the mainstream media, which continue to promote the model of nuclear family-hood, even if it is provisionally represented by elite white gay “The Kids Are Alright-style” yuppie throwbacks with photogenic children.  Historically, families of color have always been diverse by culture, economic necessity and social obligation.  Extended African American family networks of adult caregivers, gay and straight, related and un-related, have always contributed to childrearing.  When racist/sexist criminal sentencing policies, joblessness and inequitable access to housing loosened or precluded “traditional” family ties, multi-generational family networks were the glue.  As the recession intensifies these stressors, grandparents, aunts, adoptive parents, foster parents and “play cousins” from all walks of life increasingly become frontline providers for African American children.  Thus, the Times’ snapshot of affluent comfort contrasts with the realities of many LGBT families of color who struggle to stay above the poverty line.  Further, the depiction of white childrearing and parenting as the de facto norm contributes to the national narrative that non-traditional families of color can never represent an authentic model of family.

In reality, the numbers of same-sex families of color are increasing, especially in traditionally conservative Bible Belt regions in the South.  African American strongholds like Atlanta have seen a new black “re-migration” driven by the ripple effect of high unemployment, foreclosures, and gentrification in northern urban black communities.  According to Family Equality, LGBT families are “more racially and ethnically diverse than families headed by married heterosexual couples.  Of same-sex couples with children, 41% are people of color, compared to 34% of married different-sex couples with children.”  Impacted by racism, sexism, heterosexism, and segregation, same-sex families of color are also more likely to be near the poverty line and hence more reliant on public social welfare and health care assistance.  Nonetheless, when textbooks, TV shows, and Hollywood films envision culturally “diverse” LGBT families it is through the lens of privileged white middle class folk who have “benevolently” decided to adopt a child of color (ala the white gay couple on the sitcom “Modern Family”) or used expensive reproductive technology to have children.  In this context, marriage equality merely secures white wealth and white patriarchy, as white gay families also benefit from segregated neighborhoods, schools, tax credits for middle class homeowners, and higher-paying jobs.  Complex families of color that are either headed by single gay or straight parents are marginalized as inherently dysfunctional, welfare-dependent and socially borderline.  Loving gay partners of color with children are nonexistent.

This media white-out has insidious implications for both straight and gay children of color.  If gay children of color don’t see loving adult gay and lesbian caregivers then they will continue to internalize their own dehumanization.  If straight children of color don’t see loving representations of LGBT parents and families of color, gayness will still be viewed as a lifestyle choice; a sin in the eyes of “God” and a form of “white” deviance.  In 2011, the California State Assembly passed a bill requiring that the contributions of LGBT communities and historical figures be taught in K-12 classrooms.  There is little evidence that this well-intentioned law has any teeth, as Ellen DeGeneres is the only prominent lesbian most high school students seem to know and most dialogue on homophobia never progresses beyond a token lesson on bullying.  In my gender justice and sexuality work with high school students, I’ve used films and texts such as That’s a Family, Straightlaced, Rethinking Schools, Byron Hurt’s Beyond Beats and Rhymes and Christine Sleeter’s “Turning on Learning” guidebook.  Yet there are virtually no K-12 resources that address the racialization of gender and sexuality from the perspective of queer youth of color.  Curricula and pedagogy that deal with the particular way hetero-normativity plays out for youth of color in a white supremacist culture where black and Latino sexuality is already demonized as savage and pathological, are few and far between.

Moreover, the absence of public conversation around the role religious bigotry plays in the epidemic of homelessness amongst African American youth is a critical blind spot.  Despite all the hype around gay-friendly congregations (as well as recent data suggesting black gays and lesbians are just as invested in religious communities as straights), cultural messages about the sin of homosexuality as an affront to masculinity and the “ideal” of strong black families headed by good black patriarchs are still widespread in black communities.  Nationwide, increasing numbers of LGBTQ (lesbian, gay, bisexual, transgendered and questioning) youth of color are becoming homeless due to overt anti-gay harassment, emotional/physical abuse and lack of social acceptance by their families and communities.  LGBTQ black and Latino youth are also more likely to be suspended and expelled than are white LGBTQ youth.  With African American children comprising nearly 40% of the nation’s foster care and homeless youth populations, culturally responsive feminist approaches to caregiving and family sustainability are crucial. Living in a culture in which they are reminded daily of their non-existence by a white supremacist heterosexist nation that deifies straight white beauty ideals and views affordable housing as a privilege, some LGBT homeless youth of color resort to destructive behaviors like survival sex and drug abuse.   Demographic patterns have long shifted to make whites a minority in the U.S.  Yet mainstream media is still in the segregationist Ozzie and Harriet era when it comes to the realities of families of color, buttressing bankrupt social welfare policies that expose the Christian fascist sham of American “family” values.

Related ItemsBlack WomenFamilyMarriageSexualityWomen of color
← Previous Story Special Report: The Commission on the Status of Women Comes to an End
Next Story → COLLEGE FEMINISMS: Elementary Feminisms: Majoring in English