A Declaration: Toward A New Politics of Black Female Sexuality* – The Feminist Wire

Home / Black Women / A Declaration: Toward A New Politics of Black Female Sexuality*

A Declaration: Toward A New Politics of Black Female Sexuality* 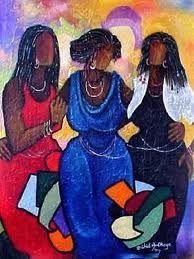 I want to begin this essay by declaring my stake and investment in the project of rearticulating and reframing narratives around Black female sexuality. I was born to a Black Puerto Rican American mother who birthed me at age 18. I was raised by my mother, grandmother, aunts, and my mother’s friends who had children the same year I was born, and in a community of Black women who had children out of wedlock and raised us without the consistent presence of men. My mother, and the mothers in my community, at times were on government assistance to supplement their low paying-jobs (don’t ever let my mother know I said that in public though). My mother, and the other single-parent, unwed Black women in my community also dated men who were not their babies’ fathers.

White supremacist and heteropatriarchal logics would have you and me believe that my mother, my grandmother, and the Black women in the community I was raised in are licentious, amoral, and abject. Reagan was likely referring to the women to whom I owe my very existence during his diatribe about “welfare queens.” For a while, I internalized these sinister myths. I remember being called a “bastard” as a child and feeling so mad and betrayed by my mother for not being married to my absent father and for dating men who were not my father. But as I grew up, I realized that the love I was given by my mother was not compromised or tainted or flawed because she was an unwed, single parent who dated other men; that I was not somehow deprived of something because of the absence of a male parent or my mother’s love life.

In fact, I would argue that I greatly benefited from being raised by and in a community of single Black women. They cultivated an affirming love that allowed a gender queer Black boy like me to realize my full humanity and self-worth in ways that men in my community would not; they protected me from men who literally tried to “beat the faggot out of me.” In fact, the community of single Black women I was raised in created radical and subversive environments that challenged and averted, with all the spirit that only a mother can wield, the types of heteronormative and patriarchal violences that a queer Black boy in the hood like me would encounter.

With that said, I am committed to articulating a new politics of Black female sexuality simply because my mother exists, my grandmother exists, and the love that they have for me and I for them exists, and I want to honor that love and help liberate them from the stigmas and shame that circumscribe their lives. Also, I believe that new articulations of Black female sexuality will have the possibility to liberate other bodies and desires rendered deviant within the white supremacist heteropatriarchal capitalist project; and so my theorization of a new politics of Black female sexuality might also help me to rearticulate a politics of Black and queer desire. The ways we choose to love, who we choose to love, and how we choose to create family will not be obscured or erased or contested or pathologized by dominant narratives that seek to do exactly that.

A new politics of Black female sexuality should be grounded in the histories and experiences of Black women, but should also have the potential to reframe the politics of desire of other marginalized folks. It should be embodied and expansive; and engage the physical, psychic, and emotional dimensions of Black women’s lives. I recognize that my attempt at articulating a pleasure politics of Black female sexuality ultimately might be limited and flawed by the male privilege that I have access to, and, whether consciously or not, exercise in my daily life. Ultimately, I believe that only Black women can rearticulate their politics of desire, but as a person who is deeply invested in Black women, I hope that these following ideas and words might help us move closer to Black women’s erotic liberation.

(1) Black women’s bodies, spirits, and minds belong deeply to themselves. Writing that sentence makes me sad because self-determination and self-possession seem like such fundamental human rights, but as both our past and present reveal, Black women are constantly denied these rights. I think that Black women have and should continue to cultivate intellectual and embodied practices that affirm their emotional, spiritual, and physical sovereignty. That their bodies exists first and foremost for their own enrichment and pleasure, and not for that of a partner, particularly a male partner, bears reiterating. The radical and subversive potential of dance practices like twerking, booty bouncing, and other Afro Diasporic dances practiced by female/femme identified folks is that it allows Black women to experience physical and psychic pleasure for themselves. It allows for the cultivation and experience of an erotic knowledge that is not necessarily sexual, and or not necessarily for the sexual fulfillment of a (male) partner.

(2) Romantic relationships should exist outside of the paradigm of monogamy. Monogamous relationships, in their social and historical foundations, perpetuate the forms of oppression that deny Black women sovereignty. By this I don’t mean that Black women should not practice monogamy. Instead, we should support and adopt a paradigm wherein Black women’s relationships (and all relationships) are not founded on the notion that their bodies, their erotic knowledge, their emotional and psychic labor, belong to anyone but themselves. Monogamy is founded on the same white supremacist, capitalist principal that was the driving force of the enslavement of Blacks in America and the current enslavement of women in sex trafficking: that bodies can be owned. We need to leave that shit in the past.

*I wish to thank Joan Morgan, whose course “The Pleasure Principle: A Post-Hip Hop Search for a Black Feminist Politics of Pleasure” at Stanford University inspired the writing of this essay.