“If it’s a legitimate rape, the female body has ways to try to shut that whole thing down.”  Todd Akin’s now infamous claim in August of 2012 destroyed his credibility and his reelection bid. His comments propagate a long history of victim-blaming by implying that some rapes are not really rapes.  Suggesting that the reproductive body can recognize and protect itself from rape sperm means that a person claiming to have become impregnated as a result of rape is a liar.  In an Op-Ed piece titled “Why Monogamy is Natural” just weeks after the Akin scandal, legal historian John Witte Jr. stated: “Creationists and evolutionists don’t agree on much, but they both believe that monogamy is the most “natural” form of reproduction for the human species.”  This claim raised fewer eyebrows, but this assumption that the link between love and reproduction is human destiny, according to both God and evolution, is at the heart of Akin’s claim.

Commentators across the political spectrum were quick to dismiss Akin’s comments as unscientific and to cast Akin himself as an idiot who’s been living in “a cocoon” as one blogger put it.  In Bill Maher’s words: “Here’s the only thing you need to know about Todd Akin and human anatomy: he’s an asshole.” I don’t care for Akin’s politics myself, but what makes his claims “illegitimate” is not the unscientific nature of his conjecture.  In Akin’s theory of reproduction and rape, pregnancy serves as biological evidence that calls into question the legitimacy of a rape.  This is largely unintelligible as credible science, though, as Tom Laqueur and Virginia Burrus explain in an interview about the roots of his logic and the historical viability of his theory.  Akin’s theory of rape is antiquated, but in fact it is not so far removed from the contemporary science of love.

Akin’s theory is based on the idea of “cellular agency” – where the body’s knowledge affects aspects of how we function biologically.  In his particular claim, the body knows a lover from a rapist and “chooses” not to allow rape sperm to fertilize an egg.  The idea that the body has evolved to favor reproduction in love is not so far-fetched in light of the science of love.  The assumed link between love and reproduction which underpins Akins logic is, in fact, the basis of most scientific research on human sexuality.  We are, by and large, presumed to be motivated in our behaviors by the desire to reproduce ourselves.  This is the dominant story of evolution and evolutionary stories about love.  “Love” in this formulation is the neurochemical reward that encourages species-beneficial mating behaviors (i.e. heterosexual, companionate, and aspirationally-lifelong monogamy).  Witte describes mating behaviors that deviate from this script, like mothers raising children on their own, as “species destructive” and laments their social cost.  This science perpetuates a deeply conservative political agenda.  Its logic reflects and supports a right-wing vision that underlies claims like Mitt Romney’s effortless leap from gun control to single parent households during the town hall presidential debate on October 16, 2012.

Helen Fisher, evolutionary anthropologist and scientific advisor for dating website Chemistry.com, summarizes the dominant (though certainly contested) scientific narrative succinctly in her explanation of the wiring that has evolved to promote species survival.  Fisher attributes love and sex to three complimentary brain systems: “lust,” “love,” and “attachment.”  Lust is attraction to members of the “opposite sex,” keeping us on the look-out for potential partners.  It is associated with estrogen and testosterone.  Love, associated with dopamine and serotonin, is what makes us happy and less in need of sleep in the thrall of “new relationship energy.”  Attachment is the third system, which apparently causes us to stay with a partner long enough to get our offspring through critical stages of development.  This bio-chemical narrative carries enormous cultural weight.  The fact that we so often imagine links between romance and reproduction as inevitable expressions of human nature speaks to the underrepresentation of dissent and conflict in scientific accounts of human behavior, generally, and love and sex, specifically.

To be sure, Akins’s views are outrageous to most of us.  His ideas were rejected by fellow Republicans, anti-abortionists, and progressive commentators alike.  But scratch the surface of Akins’s claims, and what we find are generally accepted ideas about love, reproduction and evolution.  If we believe that we are here to reproduce and we have evolved to do that in the bonds of coupledom, its stands to reason that the body has mechanisms for encouraging desirable reproduction.  Given how prevalent those ideas about love and sex are, it isn’t a gigantic leap to speculate, as Akin did, that perhaps some evolutionary mechanism limits reproduction outside of love.  I don’t mean to suggest that Akin’s claim is credible, but his claim should, however, alert us to a larger problem than politicians’ use of “unscientific” logics.  Akin’s claim (and Fisher’s too) depend absolutely on the everyday naturalization of straight coupling.  If the rape hypothesis seems outrageous, we also have to question the science of love.  We should be concerned about challenging the story that tells us that this is what we’re made for.

As we revel in what appears a progressive victory in which truth prevailed over conservative bias, it is important to remember that the opposite of Akin’s claim has a rich history in socio-biology.  Because males are said to have the evolutionary aim of spreading their seed as far and wide as possible and because rape can result in the perpetuation of the rapist’s genes, folks like Randy Thornhill and Craig T. Palmer in A Natural History of Rape have certainly made the claim that rape is natural.

Focus on the inaccuracy of Akin’s comments takes the focus off of what made it possible to say such a thing in the first place.  We need to talk about the legitimacy of a science of love that passes as commonsensical despite decades of queer and feminist research that undermines its central premises.  It won’t do to dismiss the claims we disagree with as “unscientific.”  We need to be able to engage with “science” when and wherever it does “count.”  And when it does and it’s to our benefit, we need to remember that our own use of scientific authority can be used against us. 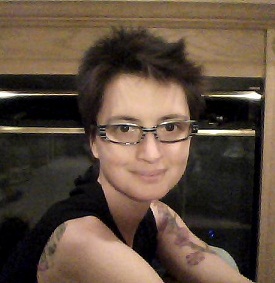 Angela Willey is Assistant Professor of Feminist Science Studies, jointly appointed in Gender Studies at Mount Holyoke College, the School of Critical Social Inquiry at Hampshire College, and Women, Gender, Sexuality Studies at the University of Massachusetts Amherst.  Her research examines the historical and cultural reproduction of the ideal of monogamy as well as resistance to the normalization of coupled forms of social belonging.  She is author of “‘Christian Nations’, ‘Polygamic Races’, and Women’s Rights: Toward a Genealogy of Monogamy and Whiteness”, “‘Science Says She’s Gotta Have it: Reading for Racial Resonances in Women Centered Poly Literature”, and co-author of “‘Why do Voles Fall in Love?’: Sexual Dimorphism in Monogamy Gene Research” with feminist neuroscientist Sara Giordano.  She is working on her first book, From Pair Bonding to Polyamory: On the Political Nature of Monogamy.  She also co-chairs both local and national feminist science studies organizations: the Five College Feminist Science and Technology Studies Initiative (FSTSI) in Western Massachusetts and Feminists in Science and Technology Studies (FiSTS), a mobile taskforce of the National Women’s Studies Association (NWSA) and The Society for the Social Study of Science (4S).