The one we look at as the one cursed

hangs her orange beast-face, a block for a breast

screwed to fit the composition of the idea, the abstraction,

a smile or simply a slit through which you can draw

your ticket and enter the gate

. . . he was using the vague semblance of women

to turn the century

to eat or flay or were they pre-flayed, tenderized

oh, but look at those tones!

—fit for the tomb—

a box with limited shadow

so there was limited light 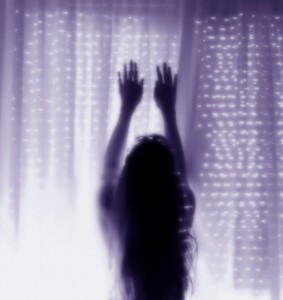 their bellies dragging from room to room

their perfect skin obscene as the moon-beyond-full lopsided wheezing

from stone to stone     ribboned her around

the heron’s leg     propped her

head on a stabbing rock

thrust fistfuls of minnows through her veins

& when they wrung her flesh

to drips     the bank weakly bled

the deer stood around

Alessandra Lynch is the author of two collections of poetry,  Sails the Wind Left Behind (Alice James Books) and It was a terrible cloud at twilight (Pleiades Press).  Her poems have appeared in The American Poetry Review, jubilat, Ploughshares, The Virginia Quarterly Review and other journals. Alessandra lives near an Indianapolisian canal and teaches in the undergraduate and graduate programs at Butler University.