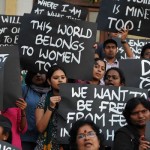 When I was five years old I was sexually assaulted by neighbors.  Ours was a tranquil post-white flight neighborhood of single family homes, obsessively tended lawns and keeping-up-with-the-Joneses home improvement. It was the mid-seventies; before black women’s experiences with rape had come into broader public consciousness through works like The Color Purple and I Know Why the Caged Bird Sings.  The term sexual assault was largely unknown. The language that rape prevention activists now use to validate the everyday terrorism girls and women deal with was not a part of our vocabulary or classroom curriculum. In my critically conscious upbringing I was raised to clearly understand the racist police who abused and murdered us, the racist criminal justice system that jailed us, and the racist cultural history that rendered us invisible. I was taught to revere the black warriors who crusaded against the holocaust of slavery and its aftermath.  But I was not taught to know, understand or identify the casual predators that moved in and out of our lives without detection or censure; the parasites who posed as strong upstanding black men in the light of day and terrorized with impunity behind closed doors buttressed by violent silence.

Last month’s barbaric gang rape and murder of a 23-year old female student on a bus in Delhi, India was a stark reminder of this violent silence and the global expendability of poor women of color in so-called democratic societies. The suspects—who were recently charged with rape and murder—allegedly attacked the young woman in order “to teach her a lesson” for being out with a man. Commenting on the international outrage that the crime has elicited against the backdrop of India’s economic ascent, writer Kishwar Desai reflected that “a certain class of men is deeply uncomfortable with women displaying their independence, receiving education and joining the work force. The gang rape becomes a form of subduing the women, collectively, and establishing their male superiority.” India is dead last on Trust Law’s 2012 list of 19 best and worst countries for women’s rights. Muslim fundamentalist Saudi Arabia is number 18. The U.S. is number six. But like South Africa (number 16) and Brazil (number 11), institutional racism, sexism, and heterosexism determine access to health care, reproductive rights, and economic opportunity in the U.S. In her article “Black Women, Sexual Assault, and the Art of Resistance,” Brooke Axtell writes that “the Department of Justice estimates that for every white woman that reports her rape, at least 5 white women do not report theirs; and yet, for every African-American woman that reports her rape, at least 15 African-American women do not report theirs.” Between 40-60% of African American women have experienced sexual assault by the age of 18.

Decades after “Denim Day,” “Take Back the Night” and other global rape awareness movements were popularized my students are still living the reality of violent silence. Nearly every girl in my Women’s Leadership Project (WLP) feminist mentoring program has been the victim of sexual assault or abuse. Initially, most have no language to articulate their anger, much less their post-traumatic stress experience. The repressed rage that girls of color carry with them about rape and sexual harassment comes out in shame, blame, and self-hatred. It’s spit out in the casual misogyny of their embrace of epithets like “bitch” and “ho.” It’s displayed in the yards of Rapunzel-esque hair that they swath themselves in to obliterate their “ugliness.” And it is manifest in the increasing number of “very young girls” that are sucked into prostitution; brutalized by gang rape and “pimped out” by men they view as father figures. During a recent day of dialogue moderated by WLP students at Washington Prep High School in South Los Angeles many girls were loath to identify sexual violence as a significant factor on campus. There were numerous anecdotes about girls being threatened with gang rape as well as adult male campus security guards sexually harassing girls. Nonetheless, it was female behavior, and not male behavior and the culture of the school, which was criticized. In the grand scheme of the community the experiences of girls of color don’t matter. Far too often in mainstream discourse, rape is only politically significant when it is framed as a phenomenon that happens “over there”, in the backward “third world,” or “here” to a young white female victim in the civilized U.S.

In the aftermath of the young Indian student’s death, the outcry against the country’s misogynist culture of rape, murder, and dehumanization will hopefully be a watershed for legislation protecting women from sexual assault and intimate partner violence. But the patriarchal nationalist resentment that writer Desai portrays as India’s affliction also drives the savage anti-feminist backlash in the United States and its culture of violent silence.

Related Items
← Previous Story Book Review: 101 Things That Are Not True About The Most Famous Black Women Alive
Next Story → Poem Feature: "Moviemakers"