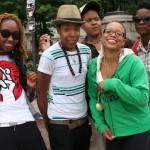 During the 2012 presidential election, there was much conversation among journalists, bloggers, and activists about the innovative ways students were using social media to mobilize for candidates supporting LGBT rights and other progressive issues. But, LGBT students—particularly LGBT students of color—were not only using these platforms to fight for legislative changes. They were also using the digital world to engaged in forms of embodied activism. Through tumblr, YouTube, Instagram, Facebook, and Pinterest, college-age folks highlighted the diverse ways they use clothing to (re)define and (re)articulate what it means to be a self-identified queer person of color on their campuses and in other social spaces where their dressed bodies are read as non-normative. Students use the word “queer” in some instances to define their  sexual orientation but also to describe how they consciously disrupt gender norms or to reflect their eclectic tastes in fashion, food, and music…or as a combination of all of the above. Clothing in particular is a conversation piece. It communicates a message that is then (mis)interpreted by onlookers. I’ve been analyzing these lively public conversations about dress and identity politics on my campus.

Many students at the University of Massachusetts Amherst are actively engaged in conversations on the politics of adornment for queer students. For example, the day after the November presidential election, the UMass Daily Collegian ran an article critiquing the mainstream fashion industry’s use of the term “lesbian chic” as a means to sell clothing to a growing queer market. That same month, one of my students asked me to meet with a group of student activists to discuss issues of dress politics for marginalized groups on campus. I realized the importance of using my classroom as a space where students could discuss campus dynamics and the social implications of their clothing choices.

That semester, I was teaching a new course called Feminisms and Fashion, which attracted students from four of the Five College schools. In class, we reflected on constructions of queerness and the political potential of fashion. During one of our class meetings, I wrote the names of the Five College institutions on the board: Amherst College, Hampshire College, Mt. Holyoke College, Smith College, and UMass Amherst. I asked the students to describe the style of dress that characterizes the students at each school. They earnestly debated with each other about the stereotypical sartorial styling at each institution. Here were their conclusions:

UMass—hodgepodge of the other colleges’ styles, depending on what area of campus you’re in

The students acknowledged that their conclusions were generalizations. However, they also realized their dressed bodies produce social meaning and that terms such as “preppy,” “hippie,” and “queer” are informed by social constructions of race, class, and gender. This helped them understand why the clothing of queer folks of color is often read as deviant or socially non-conforming, even when the wearer is dressed similarly to their non-QPOC peers.

Often, we professors have great discussions in our classes or we receive brilliant student work, but unfortunately those experiences remain within the walls of the institution. I want my students to use the analytical tools they learn in my classes to produce thoughtful social/digital media content that allows them to add their voices to the (inter)national debates about identity and the possibilities and limitations of embodied activism. The students in my Fashion course had to produce feminist multimedia projects (ie: blogs, videos, look books, etc.) that contained original content. A third of the projects focused on the topic of “queer fashion” on college campuses. One student, Juliana, conducted ten interviews with queer-identifying students in Massachusetts and her home state of Florida to show the range in definitions of queer and the variations in personal style among queer students. She photographed her own fashion shoots featuring the student models she interviewed. Juliana posted her content on her blog Queer Eyes Queer Words.

Chloe Collins, an African American senior at Smith College, was so intrigued by our discussion on the “queer aesthetic” at Smith that she decided to produce the “QPOC Dressed Body Project,” a series of video interviews with four queer people of color at Smith. Chloe’s interviewees (Mei, Nandi, Paige, and Tejal) touch on salient issues facing QPOC on Smith’s campus and in broader society. The project enabled Chloe to generate conversation on her elite campus about the politics of dress and the specific challenges QPOC students face. I interviewed Chloe about the motivation and methodology for her project. Be sure to watch her videos below.

Tell me a little bit about yourself and what inspired you to do the “QPOC Dressed Body Project”?

I am a Smith College senior with concentrations in the fields of Studies of Women and Gender, English Language and Literature, and Book Studies. The “QPOC Dressed Body Project” arose out of our class discussion of Five College stereotypes. I was interested in the construction of queerness at Smith, what Smith stereotypes include, and how queer people of color see themselves in relation to “the face” of Smith queer. Using Smith as a case study, I aimed to explore how environment informs body adornment, how dress is used to convey information about identity, and how identity is interpreted and read on the queer POC dressed body. My first step in putting my project into motion was creating a tumblr, which helped me engage with others who were talking about QPOC identity and dress. Conducting video interviews seemed like an effective way to gather narratives while simultaneously giving my audience an interesting visual component. During the interviews, I asked the interviewees questions including: How do you define “queer”? Do you think there is a “queer uniform” or aesthetic at Smith? If so, describe that aesthetic. Do you actively play into or push against that aesthetic? Do you think your QPOC body is read differently than your non-POC peers?

Based on your interviewees’ responses, what did you conclude?

After conducting my interviews and re-watching the video content, it became clear to me that the project participants viewed their queer and POC identities as inextricable. I gathered that because they were automatically “othered,” the interviewees used their QPOC identity and clothing choices to defy norms and stereotypes, whether they did so intentionally or not. Though most of my video content is directly related to Smith culture, it is applicable to other similar social spaces. Looking at Smith as a microcosm allowed me to place my findings on QPOC students’ engagement with adornment politics in a wider context on my tumblr.

Chloe’s project is part of a broader conversation in the digiverse documenting the ways in which queer folks of color are using their dressed bodies as an extension of their identity politics and their activism. The Queer Women of Color Media Wire is an advocacy organization that addresses issues related to beauty and body image. Rock and Soul band The CooLots (pictured above) use the web to celebrate diversity and self-expression through music and dress. Such projects are a reminder of how digital and social media can facilitate students’ entry into these debates.  I consider myself an ally for my students as they address the social justice issues that matter to their generation. We—as a digital milieu of progressive thinkers, activists, and cultural producers—have a responsibility to keep these conversations alive in order to generate new questions and new approaches to addressing issues concerning marginalized groups.

Related ItemsAcademiaCulturequeernessSexualityStyleYouth
← Previous Story E(race)sure, Queerness, and Civil Rights in the South: The Undocubus and the Legacy of Bayard Rustin
Next Story → Yes, I Do Look Like A Lawyer