Prometheus Unbound/Woman in Chains: Reading Popular Film through the ‘War on Women’ Framework – The Feminist Wire

Prometheus Unbound/Woman in Chains: Reading Popular Film through the ‘War on Women’ Framework 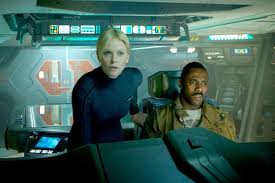 I love movies: all kinds. I majored in film technology and screenwriting as an undergraduate student; I minored in Cinema Studies. I grew up in the age of the Alien franchise sequels, and vividly remember seeing them at the Cineplex Odeon Theater in Paramus, New Jersey, as a kid in the 80s. Naturally, my curiosity was peaked when I saw trailers for Prometheus earlier this year. Though it was a blockbuster, due to mixed reviews I skipped it on the big screen. However, my only sibling, who is over a decade younger than me, recently visited; since his visit coincided with Prometheus’ DVD release, he insisted we watch it. Expecting to see Charlize Theron in a strong leading role, and given the connections to the Alien film series, I relented. And I experienced something I wasn’t prepared for as the corn popped in the background. While I expected flawed science accompanied by emphasis on special and technical effects, and low diversity-alien creatures notwithstanding, I was surprised to encounter visual rhetoric and imagery regarding women’s reproductive rights.

In Prometheus, a crew lands on a planet with the goal of discovering “the engineer” of humankind. Predictably and disappointingly, the “engineer” ends up being an uber-White (think Aryan) gigantic, violent, non-communicative man. In similar fashion to The Day the Earth Stood Still (the original and the re-make), a White male actor portrays the alien ‘other’ in Prometheus. The film is actually grounded in a White-male trinity of sorts wherein the robot, the old man, and “the engineer” control the mission and the crew, and in turn control the outcome of the voyage.  In fact, ‘fatherhood,’ specifically, sets in motion the fate of the doomed crew; similarly, male dominance seeks to harness and control women’s reproductive freedom and sexual choice. Patriarchal dominance aside, as well as racial tokenism–Idris Elba plays the sole person of color, and though in a position of authority as the ship’s captain, he dies a martyr on behalf of mankind–I find myself most troubled by the film’s treatment of reproductive freedom.  Mirroring the common practice from science fiction films, Prometheus explicitly engages in conversations central to our political moment.  The setting of “the future” and the trope of “fantasy” provide a space for exploration and engagement with controversial issues, which in this case leads the film to reify reactionary gender politics, especially as it relates to reproductive freedom.

Though Prometheus is a work of science fiction, as a popular film–a blockbuster–it acts as a cultural transmitter of sorts; that is, through visual tropes and signifiers it acts as a site for meaning-making that is critically bound to political messages and features of current public discourses and debates that otherwise influence viewers.

Foremost, I will concede that the film showcases three powerful women: a female archaeologist, Dr. Elizabeth Shaw (played by Noomi Rapace); medic Ford (played by Kate Dickie); and mission director Meredith Vickers (played by Charlize Theron.)  Embodying longstanding stereotypes, the film depicts Vickers as a controlling and heartless autocrat. In fact, her own survival matters more to her than the crew’s wellbeing or the fate of the entire human race. Ford receives little attention in the film and, like the rest of the doomed crew, with the exception of Dr. Elizabeth Shaw, does not survive the expedition. While there is much to be said of the Shaw character in terms of her disempowerment at the hands of male crew members and supernatural species/ creatures, the most salient aspect of Shaw’s disempowerment emanates from the violence against her body culminating in a shockingly anti-woman, anti-choice message. 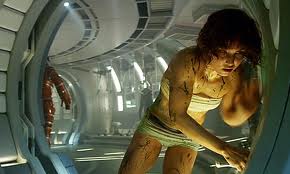 The audience is made privy to Shaw’s infertility (her archaeologist partner, who accompanies her on the Prometheus expedition, is also her boyfriend), but shortly after the major cave discovery and exposure to alien life, she becomes pregnant. The pregnancy is a result of a sexual encounter that occurs after the humanoid robot, David (Michael Fassbinder), contaminates Shaw’s partner with a foreign liquid substance discovered in the cave.  The film’s narrative and visual plotline images Shaw’s ‘pregnancy’ in unconventional terms: a (white, male) robot impregnates her by contaminating her partner without consent, which we might identify as “illegitimate rape.” This robot refuses to allow Shaw to terminate the pregnancy, highlighting its/his power and dominance! Upon revealing Shaw’s condition, David concedes that the ‘fetus’ is not human and with utter disregard for her life, states again that HE cannot allow her to abort the creature (which she refers to as a ‘monster’.) When she tries to escape, he proceeds to inject her with a sedative. On what appears to be sheer will and adrenaline-based terror, she breaks free of restraints, runs half-naked to the ship’s ‘hospital’ and proceeds to seek solutions for her unwanted, literally alien, pregnancy. Of course, the automated surgery pod device reveals a number of options, none of which are designed to deal with issues of the female anatomy; namely, abortion is not an available procedure. The increasingly frantic (half-naked) Shaw finally locates a gender-neutral ‘abdominal extraction option’ (i.e. a caesarean by another name), hurriedly selects that option, and jumps onto the operating table inside the pod. Once in the pod, robotic, pre-programmed devices pop out, administer a local anesthesia, and open her abdomen with a laser.  Then, metallic claws reach in and extract the ‘fetus’…a medium-sized, octopus-like creature that screams, hisses and flails its tentacles.  Indeed, a monster.

Highlighting a level of resistance and agency, Dr. Shaw escapes her confines and makes her way to the medical unit to program the surgery pod.  While enduring immense physical pain, grief resulting from the brutal death of her boyfriend, and fear, she makes a choice, highlighting the lengths she must go to control her own body. Worse yet, her choices are constrained by male power.

The procedure itself, while ‘advanced’ and precise, is shown to be excruciatingly painful. She stays awake throughout the duration.  Yes: it is that dramatic, and I would argue from a feminist spectator standpoint, traumatic. Everything about this plotline and its depiction is deeply unsettling, in terms of its blatant anti-choice position and its hatred of women, especially educated, independent women like Dr. Elizabeth Shaw. She is unable to terminate her pregnancy, so she relies on an early (pre-term) caesarean as a means of saving her own life, a life that was of little value to the robot, David, or anyone else aboard the Prometheus, for that matter. And though she has been the victim of David’s violence, in ironic fashion they are the only two survivors of the catastrophic, failed space voyage, so she becomes reliant upon him to help her navigate and operate the spacecraft that will allow them to escape. This ‘irony’ is troubling, as it suggests that in spite of violence and abuse women remain dependent upon (male) perpetrators to secure some type of existence.  He becomes a savior; her victimizers’ redemption becomes the film’s central concern, which is telling about both the film’s erasure of her trauma and its disregard for the violence inflicted on her body.  In imagining a happy ending made possible through white, emotionless, patriarchal robot David, Prometheus positions his ‘choices’ and skills as desirable and superior.

This sequence depicting Shaw’s ‘pregnancy’ is painful, objectifying and degrading on many levels. First, the fact that she is unwittingly impregnated in a plot engineered by a male, humanoid robot; second, she is told that she will give birth regardless of her pleas for termination and in spite of the fact that the pregnancy is likely to be life-threatening at best and fatal at worst; third, that when she takes matters into her own hands, at extreme personal risk, the seemingly neutral medical operation pod has no termination (i.e. abortion) options are telling.  They are all disturbingly consequential given a cultural environment that has waged war on women, with specific attention to reproductive freedom and access to birth control via the highly publicized, Right-wing, anti-choice agenda to de-fund Planned Parenthood.  Dr. Elizabeth Shaw is an attractive, educated archaeologist, yet the film Prometheus punishes her, ultimately, through patriarchal subjugation: she is forced to ‘mother’ or give birth to a monster, taking the historical ‘women as vehicles for procreation’ idea to a whole new level.  That a ‘male’ robot (programmed by Peter Weyland, the elderly founder and CEO of the Weyland Corporation, who funds the creation of the scientific deep space Prometheus vessel and the doomed voyage) has more control over her reproductive choice than she does is unacceptable. Surely an educated scientist can decide whether or not to give birth to a violent alien creature? Prometheus is set in the future. It’s a future in which male dominance, violence, and hatred of women abound…one that in the end, bears striking resemblance to the present. 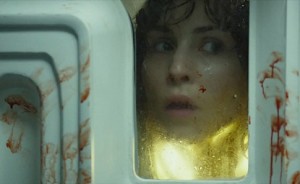 Feminists have long defined the struggle to protect reproductive rights as the fight to protect women’s control over their own bodies. The 2012 presidential election has made the stakes all too clear.  Although choice and reproductive freedom has been central to the culture wars since Roe v. Wade, presumably settled issues of birth control have emerged as yet another locus whereupon the bodies of women are under attack.  Just days before the election, Paul Ryan (Republican Vice Presidential Candidate and Senator of Wisconsin) discussed the role his Catholic faith plays in his anti-choice stance. Even earlier, coinciding with the turnover of Congress from a Democratic majority to a Republican (and mostly Tea Party) one, feminists and progressives have been engaged in the war on women–a legislative and popular discursive battle to retain and in some cases regain the ground fought and partially won by members of the Second Wave: activists, organizers, and academics who used feminism as a platform for positive social change for women in the U.S. The War on Women is beset by several important topics: pay equity, violence against women, and reproductive rights, the pinnacle of which is responding to the attacks on Planned Parenthood.

So what does it all have to do with Prometheus, a blockbuster, science fiction film set in the fictional future, based primarily on fantasy and creative license?  A whole lot, illustrating that gender roles and so-called women’s issues require analysis that goes beyond deciding whether or not the film gets two thumbs up or five stars. On representation of women and women’s issues: Prometheus is rotten tomatoes. 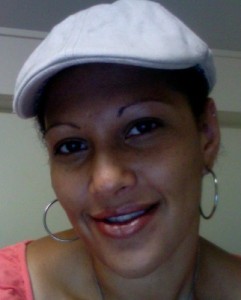 Stephanie Troutman, Ph.D is the daughter of interracial, working class parents. A Black feminist scholar and first-generation college student, Stephanie received a Dual-PhD in Education and Women’s Studies from The Pennsylvania State University in 2011. She currently serves as Assistant Professor of Women and Gender Studies and African-American Studies at Berea College in Kentucky. An interdisciplinary scholar, Stephanie’s research interests include issues of race, gender, and sexuality in relation to both popular culture and educational policies- including curriculum and pedagogy, media and youth discourses on issues of identity.

Related ItemsCharlize TheronChoicePrometheussexual violenceWar On Women
← Previous Story “Can I Have Another Snack?” The Trials and Tribulations of Parents and Food
Next Story → Leaving Jesus: Women of Color Beyond Faith