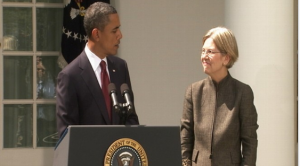 Elizabeth Warren, candidate for the Senate in a highly contested race against Tea Partyer Scott Brown in Massachusetts, has faced an unprecedented type of scrutiny from her Republican opposition. They want to know, has she or hasn’t she engaged in responsible interracial politics? This may seem like a stretch for the “we’re white and we’re proud” party, but the Scott Brown campaign has been raising questions for months now about Warren’s choice to allow herself to be listed as a ‘minority law teacher’ since the mid 1980’s and used by Harvard to boost its minority faculty numbers.

Fueling the firestorm was Warren’s refusal to engage with the issue until September 24 when she released a 30 second video on YouTube, explaining the source of her knowledge about her heritage, and insisting that she “never asked for and never got any benefit because of my heritage.” The problem is, of course, that whether or not she received any benefit is as difficult to know with certainty as to know (sometimes) whether one is facing racism or just plain rudeness. It can be difficult to decisively classify public reactions of all sorts. Once one puts one’s lineage out into the public domain, the responses to it—positive or negative—can be a hot mess to sort out.

How should progressives respond to this controversy? Clearly, the Scott Brown crowd cannot pose as the standard bearers for responsible behavior around racial identities. The tomahawk chop and war whoops that Brown supporters were videotaped making in a recent rally display the craven inconsistencies of a party wanting to claim the anti-racist high ground while simultaneously, and constantly, playing to the racism of their supporters for their own benefit. The war-whooping pranksters at the recent rally, however, were hardly overwrought supporters from the base but seasoned operatives who knew what they were doing: they included Brown’s deputy chief of staff Greg Casey and Massachusetts GOP operative Brad Garrett. Native American analysts have effectively criticized the racism on display in this event in editorials across the country. But beyond exposing the racist Republicans, the question remains, what should we think about Warren’s public espousal of an indigenous heritage?

I have faced this issue myself, as a light-skinned Latina with a white mother and little Spanish. One point about Warren that many commentators have emphasized is well-known to many of us who are mixed: looks are not always reliable. This is not only because mixed race persons can look radically diverse even in the same family, with some appearing to be entirely of one race. But also, and more importantly, because how one ‘looks’ depends on who is doing the looking. Racial ‘seeing’ is the product of a learned practice, and different communities can teach this practice in quite different ways.  Whites in particular should not assume that the way they see race is the way, or the natural way, or the most objective and reliable way to judge someone’s racial genealogy.

Such talk of racial ‘seeing’ can give one the hives, but it is simply a fact that racial identities are usually visible identities and the codes of visibility vary. In-groups undoubtedly have an advantage. The bottom line is that the way Warren looks to most white people is not an indication of anything except, perhaps, for the likelihood that she has, or has not, experienced racism.

Visibility aside, some believe the question of identity is easily settled by the facts about one’s heritage. Yet here too complexities arise. Warren has asserted Cherokee and Delaware heritage on the basis of what her family members have told her. This is a common scenario to which many of us can relate, and yet American Indian identity has been subject to much stricter rules than any other racial identity in the U.S. because of the long history of land claims. In order to claim any rights such as minority scholarships or be counted in population statistics, the U.S. government has imposed on Native peoples a 25% criterion of demonstrable genealogy and has also required that one be registered with a tribe. These criteria were not put forward by Native groups themselves, and many have opposed the idea that Native group identity could be policed by the forces that tried to wipe it out through genocide and forced assimilation. Moreover, thousands of European settlers voluntarily assimilated to Native tribes and were accepted as full and equal members. The Cherokee in particular have a long history of open identity borders, and only last year began to require that those who claim Cherokee status must prove their ‘Indian blood.’

So there is a genuine political question here. Now that we are in the late stages (one hopes) of colonialism, should the U.S. government be in the business of regulating racial genealogy claims? How might this be done, and by whom? Who benefits when we do so? Lots of people have a similar experience as Warren, hearing stories about their heterogeneous background as ‘family lore’ without the possibility of definitively fact-checking the memories and claims of relatives long deceased. Her father was a janitor and her mother worked at Sears, suggesting a class background concordant with most Native peoples. She grew up in Oklahoma. Her father’s family was convinced enough about her mother’s Cherokee and Delaware heritage that they made trouble about the engagement, causing the young couple to elope. These facts are suggestive of the truth of Warren’s Native heritage but not definitive.

I have gotten some interesting contradictory claims about my own lineage from the Panamanian side of my family. One aunt always insisted that we were “100% European,” despite the fact that my grandmother’s maiden name was Hassan and everyone else agreed she was an obvious Mulatta.  Other relatives made an assortment of claims that we have indigenous Guaymi, Lebanese, Syrian, and/or North African lineage. The confused and contradictory answers I was getting eventually prompted me to stop asking, but I think I can at least conclude that my Aunt’s insistence on our pure European blood—whatever that means—was a racist fantasy.

Warren cannot be criticized for having insufficient facts, nor for her acceptance of her family’s claims, which appeared to be more consistent than mine. The moral and political issue concerns what she did with these claims.

One might hold that Warren herself was unlikely to have experienced anti-indigenous racism growing up, and this should impact her right to claim the identity on application forms. Yet recent work on implicit bias has exploded our ideas about how well we can predict whether someone has been the target of racism. Given that neither racism nor sexism need be consciously avowed for it to have an impact on a person’s judgments and behaviors, an employer or teacher or admissions committee can unknowingly enact discrimination. All that is required is that the target be visibly or otherwise identified. What the social psychologist Claude Steele and his collaborators named “stereotype threat” in the 1990’s has also been shown to affect the performance of the person facing stereotypes, significantly affecting their performance on standardized tests, for example. So the point is that an analysis of racism and sexism requires us to deal with the realm of belief about one’s identity, and not necessarily the facts. By espousing a Native identity, Warren was subjecting herself to implicit bias as well as possibly threatening her own reduced performance due to the inhibition and self-consciousness that stereotypes can produce.

In short, we cannot say with certainty that Warren has not been a victim of racism. But we can still wonder whether she acted responsibly in checking boxes on application forms. Ronald Sundstrom has developed an account of responsible multiracial politics, a kind of guide for those with mixed backgrounds, in his book The Browning of America and the Evasion of Social Justice. He argues that set-asides for minority applicants should not be sought after by all those who might legally qualify but used by those most in need. Importantly, the statistics of minority inclusion should not be inflated by institutions like Harvard who want only to boost their public relations with little concern for enhancing the likely real-world efficacy of their anti-racist efforts. Another consideration Sundstrum raises is the question of experience. Warren’s upbringing among whites is relevant for her capacity to serve in any capacity that requires experiential knowledge about what it is like to be Native American in the United States today.

Still, asking someone to forego the facts one believes to be true on an application form is akin to asking someone to lie and thus willfully conceal, like my aunt, a racially heterogeneous past. Do we really want Warren and others like her to ‘forget’ their indigenous forbears and lie on the forms that ask her to characterize her identity? Surely the effort to overcome colonialism will be advanced by putting an end to the whitewashing of our history, our culture, our institutions, and ourselves. Nonetheless, the task for those of us least likely to encounter bias in our lives—implicit or overt—is to strive to make our choices serve the cause of reducing bias, in the name of our non-white forbears, and not serve our own causes, career advancement or otherwise. I would like to see Warren speak to this issue.

Related ItemsFamilyPoliticsU.S.
← Previous Story On The Morning of the Election (Or, "Your Abstention Will Not Protect You: Voting and Radical Black Feminist Politics")
Next Story → Breaking News: President Obama has been re-elected!