"Praying Away the Gay" Gets the Smackdown – The Feminist Wire

Home / Uncategorized / "Praying Away the Gay" Gets the Smackdown

"Praying Away the Gay" Gets the Smackdown 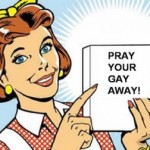 By banning so-called gay teen conversion therapy with his approval of SB 1172, California Governor Jerry Brown smacked down the forces of homophobic bigotry, psychological terrorism, and flat earth anti-science idiocy.  Sponsored by California state senator Ted Lieu, the bill was supported by the American Psychological Association and California’s Board of Behavioral Sciences.  Conversion therapy advocates have fired back with a legal challenge that claims the ban threatens “parental rights” and freedom of speech.

Also known as “praying away the gay” therapy, conversion or reparative therapy is designed to “transition” gays and lesbians to heterosexuality through a combination of counseling and prayer.  Homosexuality is treated as a disease and source of emotional/psychological dysfunction.  In his book, Reparative Therapy of Male Homosexuality, leading reparative therapist Joseph Nicholosi argues that men wanting to transition “usually hold conservative values, (are)identified with a religious tradition, and hold no deep resentments toward Judeo-Christian teachings on homosexuality.  In fact (they) most likely find them reinforcing and supportive of (their) struggle.”  However, according to the Huffington Post, one of the foremost advocates of gay conversion therapy even questioned its validity, conceding that, “In retrospect, I have to admit I think the critiques [of my study] are largely correct…The findings can be considered evidence for what those who have undergone ex-gay therapy say about it, but nothing more.”  The passage of California’s 2008 anti-gay marriage Proposition 8 and similar ballot initiatives made “praying away the gay” therapy a hot commodity.  Prior to that, the outing of former Colorado megachurch pastor Ted Haggard put gay conversion therapy on the cultural map.  Family man Haggard was famously outed by a male prostitute and underwent weeks of conversion therapy, claiming to have emerged as a gleamingly redeemed straight alpha male.  Haggard was one in a long line of GOP-hip pocket pastors, politicians, and golden boys who have been exposed as lying, traitorous, self-hating gay homophobes.

SB 1172 is one of several pieces of California legislation that aim to reinforce social justice and cultural visibility for LGBTQ (lesbian, gay, bisexual, transgendered and questioning) youth. In 2010, the California legislature passed SB 48, which required textbooks and high school history courses to include the contributions of gays and lesbians.  However, although SB 48 looks good on paper, there is no evidence that most mainstream high school curricula have been developed to include examples of prominent gays and lesbians.  And what few textbook LGBT portrayals there are rarely acknowledge multiculturalism or multiple identities.  For example, portrayals of LGBT historical figures of African descent rarely go beyond Langston Hughes.  In the mainstream K-12 imagination, Hughes has been sanitized, his body of work reduced to the universalizing metaphors of the now canonical poem “Dreams.”  High school students are far less familiar with his political radicalism, critiques of organized religion, and conflicted quest to achieve visibility as a black gay artist in the thick of the masculinist identity politics of 20th century black liberation struggle—all of which made him a Humanist model for queer selfhood and alternative masculine identity.

But the deeper issue is that simple “diversity” and “inclusivity” approaches are band-aid correctives that don’t disturb heterosexist American gender norms, identities, family structures, and cultures.  Simply including Hughes, Bayard Rustin, Gloria Anzaldua, Audre Lorde, Adrienne Rich, or other LGBT literary and historical figures in a textbook without the cultural context of their struggles and vision is a variation on the charismatic great man/woman one-trick pony.  And setting untrained teachers adrift in the classroom without culturally responsive professional development makes the policy virtually worthless for affecting long-term change in classroom pedagogy.

California’s conversion therapy ban is a good first step in reinforcing the human rights of LGBT youth and their families.  Yet, as Andre Banks of AllOut.org argues, “This isn’t just a problem in California or even only the United States…American religious extremists are bringing these dangerous practices to more than 30 countries all over the world, despite their overwhelming rejection by the medical community.”  Charlatans and religious zealots will always prey on the misguided who believe homosexuality is a pathology that can be cured.  Their justification will come from a Western world view and K-12 system that valorizes straight families, straight relationships, straight “communities,” and laws that protect civil rights for straight people as the universal invisible norm.  And their ammo will come from all the good upstanding Americana family men like Ted Haggard who dangle the promise of restored masculinity and Christian redemption.