A Response to "Voting as a Radical Act": A Word on the Shade of Shade… – The Feminist Wire

Home / Culture / A Response to "Voting as a Radical Act": A Word on the Shade of Shade…

A Response to "Voting as a Radical Act": A Word on the Shade of Shade…

Though an old trope, what makes a sketch like “I Know Black People” so electrically hilarious is its sharp challenge to the immediacy of claims by whites or other outsiders of access to black cultural interiority, claims fueled by mediating technologies and an obnoxious post-everything culture of appropriation.  “I Know Black People” is, among other things, a challenge to the illusion of black transparency or referential availability.  Inasmuch as black political culture stands to be an embodied and discursive ideal, a ground-zero for the “left” (and if not the left, the “cool”), then Dave Chappelle is poking both fun and holes in the notion that the lines between non-black and black political (dis)positions, progressive or otherwise, are blurry or indistinguishable.

“I Know Black People” is a side-eye for the ages.

To zoom in a bit and map the implications of “I Know Black People” onto the present question of radical non/voting, it seems a commentary like this one raises an eyebrow at the assumption that if progressives know as black folk Know that in the present political matrix, voting may be a gross exercise in futility, then perhaps the (often announced) practice of non-voting can be a statement of alignment, an act of solidarity with those most “understandably” hopeless or apathetic about the election’s outcomes.  This is not to say that people with varying degrees of privileged status do not have a righteous philosophical or even experiential entitlement to political grievance. Likewise, they are free to and should be respected for expressing it however they choose.

What makes a sketch like “I Know Black People” (and all its darkly comic predecessors, see Amiri Baraka’s Dutchman) so enduring is the inescapable suspicion that for some, conspicuous non-voting looks a lot like a move to borrow, name, and constrain the parameters of otherwise treacherously mutable categories of political motivation, and to do so with stylishly casual confidence.

Indeed, as Darnell and Isaiah note, for some, voting is not simply useless, it’s politically passé. To vote and indicate faith in this utterly, ridiculously violent political moment is so… March-on-Washington-MLK. Conversely, conspicuously nonvoting – conscientiously objecting, if you will! – is, like, Beyond-Vietnam-MLK (you know, that fragment of MLK political legacy that Democracy Now feels comfortable celebrating each January).

What makes me so grateful, then, for Darnell and Isaiah’s intervention is how they reveal that refuting the radical potential in the end rather than the act of voting is to very well miss the point. Indeed, if anyone imagines that the end of voting is what threatens to upend any traces of dissent in the act, then they may not only problematically homogenize, they also sorely confuse some of the political intention endowed in historical and present quests for voter rights.  Honestly, who really imagines that black folk or brown folk or poor folk or immigrants or convicted felons or any other disenfranchised people are or ever were so wholly, bamboozledly mistaken about what the end of voting could accomplish for their lives?

Where it is even conceptually or materially possible, like, in the Universe,  for folk to be threatened, suppressed, or in another era harmed or killed for just trying to fill out the dern ballot, I don’t think it’s much of a venture to suggest that these same people likely understood and understand that the end of voting is a bit of a secondary problem. Policy?  Policy is/was the cop that bludgeoned your uncle to death.  Policy?  Policy is/was the white, conservative jury that acquitted him.  President?  President was once the dude who had some-black-body’s mama emptying his toilet and is now the dude who sends drones to attack foreign enemies, killing in the process some-brown-body’s mama.

In the end, however, painfully-felt structures, institutions, and policies are but surface enactments of something much more fundamental, something much more insidious. And if this is the case, the end of voting couldn’t even PINCH that. So if there was ever a way to divorce the act of voting from its end, leaving some trace of political value (maybe something hidden, something a myopic notion of the “progressive” or the “just” can’t register), can’t the people fighting for and committing to act be recognized and trusted to know and move on that value?  I’m going to suggest: yes. 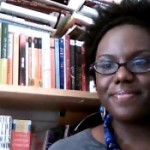 Jakeya Caruthers is a doctoral candidate at Stanford University where she teaches courses on Afrofuturism and Black Childhood. She lives in Oakland.