On Michelle and Motherhood – The Feminist Wire

Home / Family / On Michelle and Motherhood

On Michelle and Motherhood

“And I say all of this tonight not just as First Lady…and not just as a wife.  You see, at the end of the day, my most important title is still ‘mom-in-chief.’ My daughters are still the heart of my heart and the center of my world.” – Michelle Obama

In foregrounding her status as First Lady, wife, and mother, Michelle Obama effectively placed “the black mother” at the center of American democracy. Standing before the nation and the world at last week’s Democratic National Convention, she presented an intersectional black female identity as the standard for American motherhood and national identity. 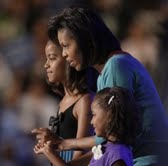 Beyond validating motherhood as a vocation, the First Lady resituated motherhood as a model for civic engagement. If we struggle, sacrifice, and build for our children as a mother would, change will come.  The First Lady’s speech appeared to be as genuine as it was politically savvy and may be considered one of the greatest statements of the social and political power, currency, and legitimacy of motherhood—and specifically of black motherhood—ever made on the national stage.

Black American cultural narratives have long valued mothers as the producers of black futurity, a role that has been explicitly political in its ties to freedom. This stance is evident as early as the nineteenth century in such organizations as the National Association of Colored Women (NACW), which counted as members Harriet Tubman, Mary Church Terrell, Ida B. Wells, Mary McCleod Bethune, Josephine St. Pierre Ruffin, Frances Ellen Watkins Harper, and other activists.  Without reducing women to their biological reproductive capabilities, these women emphasized the importance of mothers’ work in raising—or lifting—the next generation of black Americans. As such, mothers were central to the project stated in the NACW’s motto, “Lifting as We Climb,” which echoes in Obama’s words: “you reach back, and you give other folks the same chances that helped you succeed.”

In her appeal to traditional American family values, some have read Michelle Obama’s speech as avoiding feminist debate.  In a recent discussion on “Up With Chris Hayes,” linguist and political commentator John McWhorter stated that Obama’s speech “disturbed” him in that she had to downplay her own career and accomplishments because as First Lady she is a “prisoner to her spouse.”  What critics like McWhorter miss is that for women who have been denied national recognition for their work and positive abilities as mothers, Obama’s presentation of herself as a mother was groundbreaking.  The importance Obama places on motherhood suggests that she sees mothering not as an imperative, but as a highly politicized choice.

Obama’s speech—and her position as one of the most powerful women in the world—served to legitimize publicly black motherhood and to expose it as definitive of fundamental American values. In the First Lady’s rhetoric, the decision to mother is a resolve to participate in the American Dream. Obama’s invocation of the dream is necessarily a reimagining such that, as she put it, “everyone in this country [will have] a fair chance at that great American Dream.” In her avowal that that dream is based in “want[ing] something more for your kids and grandkids,” Michelle Obama effectively placed an identifiable black American narrative squarely within the formerly white, patriarchal limits of American traditionalism.

In positioning herself as “mom-in-chief,” the First Lady compels new images of black motherhood to contend with the archetype she presents; in particular, a black mother so deeply in love with her children that she would have been willing to sacrifice not only the power of the American presidency, but the historical significance of the first black American presidency, for those children.  As she stated: “like any mother, I was worried about what it would mean for our girls” if her husband became president. If this type of love—a word she used frequently throughout the speech—comes to be accepted nationally as defining black mother/child relationships, like any other mother/child relationship, then new understanding may develop around previous images of black motherhood.

In light of this new archetype, the figure of the “welfare mother” may change from the monster Mo’Nique played so well in the 2009 film Precious to a woman working two jobs who is still unable to make ends meet. If, as Martin Gilens claims and Melissa Harris Perry passionately discussed on her self-titled show, Americans hate welfare because the media has linked welfare to black people, then changing the image of the “welfare mother” could, in turn, affect American decisions on welfare and other policy, beyond traditional “women’s issues.”

Using the platform of the American presidency, Obama had the unique opportunity and power to re-narrativize the American Dream, American motherhood, and American civic participation in such a way as to open these constructs to the formerly excluded, thereby extending Americanness as never before.  Using recognizable black American themes, but emphasizing their overlap with traditional American values, Obama reinvigorated black feminist motherhood as uniquely American, as powerfully productive, and as a framework for social, economic, and political progress that may be called upon in creating the American future.

Related ItemsFamilyObamaU.S.U.S. Politics
← Previous Story A Letter to Mis(s)-Education*
Next Story → Storytelling: Or, Autoethnography in the Academic Industrial Complex