I Was Raised By Welfare: A Defense of Social Safety Programs – The Feminist Wire

Home / Economy / I Was Raised By Welfare: A Defense of Social Safety Programs

I Was Raised By Welfare: A Defense of Social Safety Programs

A few houses down from my own, there sits a white Jeep parked in front of a middle-class suburban home. Every morning I see it as I walk my dogs, and every morning my blood boils when I read the bumper sticker affixed to the back of the car: “Annoy a Liberal! Work hard. Succeed. Be Happy.” The implication, of course, is that liberalism is somehow intrinsically at odds with a robust work ethic. This infuriates me. I’m a “liberal,” by which I mean I align myself mostly with the Democratic Party and hold values that many consider liberal: I am pro-social safety net, pro-choice, and in favor of marriage equality. For many here in the State of Arizona (and across the country), anyone holding these positions is met with immediate vitriol. I could write an entire essay defending each of these positions, but here I want to contradict the increasingly pervasive view that liberals in favor of social safety net programs somehow prize laziness and begrudge the success of others.

I was born and raised in Little Havana, Florida. It is, in all honesty, a poverty-ridden Hispanic ghetto. When I was six years old, our house was burglarized while we slept. When I was 14, it was again burglarized, this time on Christmas Eve; we were left with nothing but the tree, some furniture, and our television. I attended one of the most crime-infested middle schools in South Florida; when I was 11 a student from the neighboring high school wandered into the campus, came up to me, and snatched the only gold necklace we owned, which my mom had allowed me to wear that day for a school function. Later that year, I witnessed one student stab another in art class, and saw one boy shot by another during a fight. I remember being in a classroom while in high school and sitting on the floor because there was insufficient seating. My teachers were overwhelmed, underpaid, and worked in difficult conditions. I rarely got individualized attention, and consequently spent many years falling through the cracks. Indeed, it wasn’t until I got to college and was mentored by a small group of professors that I had any confidence that I would be able to escape the circle of poverty that felt all-consuming. I am grateful for the Pell Grants that subsidized my college education (and the affirmative action scholarships that partially funded my graduate studies), and I look upon President Bill Clinton as the man who helped put me through college.

My mother was, and remains, one of the hardest working people I know. She was born on a small, impoverished farm in Cuba and did not have access to decent medical care. When she broke her arm as a teenager, it never healed properly, and as such it had limited use. Moreover, she suffers from obsessive compulsive disorder and bipolar disorder. Nevertheless, for six days a week, my mother was up every morning at 5 AM to make me dinner so I had something to eat when I got home from school. She worked from 7 AM to 6 PM Monday through Saturday cleaning other people’s homes. She was often humiliated by her employers, and would sometimes return home drenched by the rain because they wouldn’t bring her home. Despite her hard work, she did not earn enough money to sustain us, and so we lived below the poverty line. I shared a bed with her until I was seven and then a bedroom until I was 15. In fact, I only got my own room after we moved to Section 8 housing and we were assigned an apartment with two bedrooms.

We lived on welfare, food stamps, and Medicaid throughout various points in our lives, not because my mom was lazy, but because no matter how hard she worked she could not rise above a certain monetary threshold. Whenever I see bumper stickers like my neighbor’s, I think of my mom who worked hard her whole life, far more than she should have at her old age and given her mental and physical afflictions, and still needed government money simply to sustain her life and the lives of her children. Without government help, surely we would have been homeless. And even with government help, our lives were nowhere close to the luxurious existence so many conservatives imagine.  We never had a car (we took the bus or walked everywhere) and I consistently ate white rice with fried eggs for dinner– sometimes that was all we could afford.

It is from my mother that I derived the dedication and discipline necessary to succeed in college and graduate school. I took the public bus to college every morning and every evening, leaving as early as 6:30 am to make sure I got to my 8:30 class. If I had a night class, I wouldn’t get home until 11 pm, only to be up at 5:30 the next day to make it to my morning class. I worked part-time, but my mother implored me not to, because she wanted to make sure I had time to study. In my 11 years of post-secondary education, I never once turned in a late assignment. I was never late to class. I rarely missed class (even showing up the day after my 21st birthday party). And I was always immensely grateful for the opportunities afforded to me and for the teachers who mentored me.  Despite Newt Gingrich’s claim that poor children have no positive work habits because they lack a role model, I learned my work habits from my welfare-dependent mother, and these habits have stayed with me throughout my education and career.

I am in favor of a strong social safety net not because I don’t want people to work or because I prize laziness. But because I know, from firsthand experience, that in many respects hard work just isn’t enough. My mother worked just as hard, if not harder, than any CEO of any major business. She would spend nights crying because of the pain in her arm, or because she saw that no matter how hard she worked, her kid was still eating rice and eggs for dinner while doing her homework using the toilet as a desk (since, while I was in elementary school, this is the only table we had). Today, I am part of the (dwindling) middle class in large part due to her sacrifice and the help we received from the government. I worked hard to rise up the economic ladder, and was able to succeed because welfare partially supported me, food stamps partially fed me, and Medicaid helped to cure me when I was sick. My story is not unique – so many of my friends who were also on these programs grew up to become productive members of our society; they are now teachers, lawyers, paralegals, physicians, and politicians. We worked hard. We succeeded. We are happy. And we owe a good deal of our success to government safety net programs, as well as to our own initiative. We are not opposed to hard work or hoisting ourselves up by our bootstraps – but it was social welfare that provided us with those boots.

I was born in America but I identify strongly with my Cuban heritage. I am not a fan of communism, and, visiting Cuba, I have seen firsthand the poverty and desperation caused by Castro’s regime. One of the worst things you can call me, therefore, is a communist – and yet, I am consistently accused of sympathizing with communism because I believe in social safety nets. I am also in favor of a robust universal health care system in America, and this belief, also, garners me the brunt of communist accusations. But every single first world capitalist democracy in the world has some form of universal health care. Moreover, many other capitalist democracies also have strong social safety net programs for the poor; in fact, in some of these countries, housing and health care are constitutional rights, as is the case in Finland (and, last time I checked, Finland is nothing like Cuba).

I am no longer on welfare. I am a homeowner. My child has traveled more in her first three years than I had in 25. She gets to go to museums, ballets, and art and music classes – activities my mother couldn’t afford. She already has so many more opportunities than I did, and it hurts me to think that there are children her age who aren’t being fed fresh vegetables for dinner, who aren’t being read to because their parents are out working night shifts (or can’t read), or who aren’t being given proper attention in schools because they attend one that is so overpopulated and financially lacking that individual students often go unnoticed or unattended. In Washington, D.C. alone, 25% of children live in homes that struggle with hunger, while Republicans are pushing to cut the federal food stamp program. I invite these politicians to spend a day with hungry children, to look them in the eye and tell them that it isn’t worth it to invest in their potential.

And while you’re at it, I dare you to look into the eyes of my 73-year old mother, whose arm still hurts every day, and accuse her of lacking a work ethic. 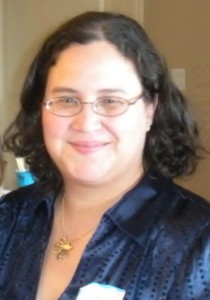 Bertha Alvarez Manninen received her Ph.D. from Purdue University in 2006 and is now an Associate Professor of Philosophy at Arizona State University’s West Campus in the School of Humanities, Arts, and Cultural Studies. Her main area of research is applied ethics, and she has published articles on the ethics of abortion, embryonic stem cell research, euthanasia, and the intersection of metaphysics and bioethics. She is happily married to another philosophy professor and has a beautiful 3-year old daughter.