Antiblack Geographies, or What the Charlotte YMCA and the Confederate Military Have in Common – The Feminist Wire

Home / History / Antiblack Geographies, or What the Charlotte YMCA and the Confederate Military Have in Common

Antiblack Geographies, or What the Charlotte YMCA and the Confederate Military Have in Common

Did you know that Charlotte’s Central City Dowd YMCA is on the same site as the  Confederacy’s North Carolina Military Institute?

This does not imply endorsement, but it is striking. Such an easy join between what used to be one of the quintessential institutions of civil society in the USA and the regime of slavery! With civil society like that, who needs a state? The Black people who work here and work out here (as I got to do once or twice) just have to suck it up and get used to walking by this plaque every day. And notice that the date on the plaque is 1994. 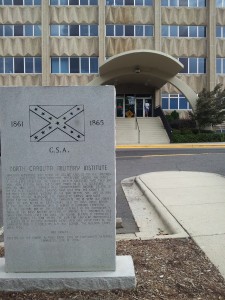 One finds these kinds of memorabilia all over the South, and if one is growing up Black in these settings, one learns to see and not see, which is the same as being seen and not being seen. To this day, this foundation in chattel slavery is elevated to a heritage that still inspires a lot of pride in certain sectors of the U.S. population. So this stuff stays, often at state expense. And in the absence of a massive neo-slave rebellion, more of it is coming.  There are efforts to repair damaged confederate statues and put wholly new ones up. Black youths will have to attend a public high school in Jacksonville, Fla., that is still named for a man who would have slaughtered them by the dozens for joining the military or registering to vote. Not that Governor Rick Scott isn’t doing a cleaner version of the same thing.

Tempted as one might be, there is no use comparing it to the Holocaust. Jews were Jews and Gypsies were Gypsies before and after Hitler slaughtered them. So memorabilia honoring Hitler and Himmler is a historico-political disrespect of epic proportions to the victimized peoples. But slavery made Black people. And if one counts imprisonment as slavery (something that even the conservative Constitution of the USA does in the 13th Amendment), slavery still makes Black people.  That is what Frank Wilderson calls a “human and metaphysical holocaust.” If a social order based on your destruction is the very thing that creates you, there is nothing left to say for that order.

There is also no use in putting it in national perspective: the Confederacy, a terrorist regime that attacked the USA in what is still the bloodiest war this country has known, is given such pride of place, a memorial plaque, in fact. But the country doesn’t care. Black people have no country. With the public purse, white people can honor their leaders who have killed us, while Black people can honor only those who have been nonviolent to white people.

Not that I long for inclusion in the state. But this type of honoring our enslavers points to something else: Black people’s consent as ostensible members of the citizenry is irrelevant to the American project. We should have known this the moment we let whites in Iowa pick our choice for President in 2008, if we didn’t know it from the Ma’afa.

Meanwhile, whole communities of Black youths can’t play outside and can’t get to good grocery stores and have vastly under-resourced educations and get shot and locked up by those who are supposed to protect and serve. And a YMCA stands at a site commemorated for training white people to keep Black people socially dead. What is a Black person to make of this?

I’m with Naima Pepper of (H)afrocentric the comic book: imagining the kind of society we will have to create where there will be a George Jackson commemoration, shared by all.

Related Items
← Previous Story Michelle Obama's Speech and Its Subtle Appeal to Republican Values?
Next Story → What Is The Ethnic Council? Eliding Racism at the DNC