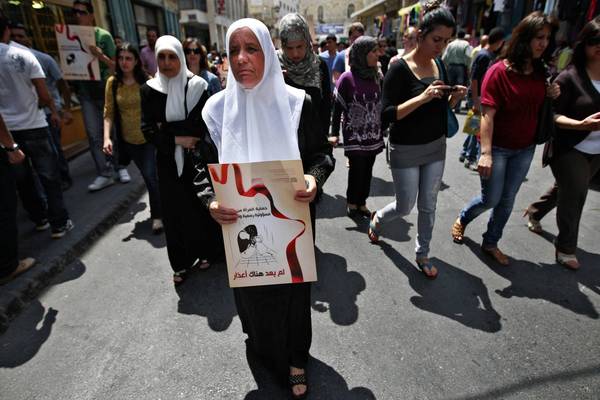 Four recent cases of Palestinian women slain allegedly at the hand of relatives have prompted women and human rights groups to demand tougher laws against domestic violence and more stringent enforcement.Several female activists marched Thursday through the streets of Bethlehem in the West Bank demanding justice for women in this patriarchal and traditional society. They also demanded severe punishment for men who kill or batter a female family member. Women carried placards reading “No to murder, yes to life” and “Shame on us Palestinians who kill our women.”

The march, which followed other protests this week, was prompted by a slaying Monday on a busy street in Bethlehem. A 28-year-old woman was stabbed several times in the chest and her throat was slashed while people stood by and watched. She later died at a hospital. Her 33-year-old husband is in custody, and authorities say they expect to file murder charges against him. Activists say the victim had been hospitalized before and had sought help from police but that no charges were brought. Instead the husband was required only to promise that he would stop beating his wife, they say.

After the woman’s gruesome slaying, activists said that the Palestinian territories’ laws against domestic violence are too lax. One allows for a sentence of as little as six months for a killing committed under the claim of safeguarding a family’s honor. Women’s groups want such killings punishable by life in prison. According to Palestinian human rights groups, 29 women in the West Bank were the victims of such killings by a relative from 2007 to 2010.

The Palestinian Authority opposes capital punishment, though it is still on the books from the days when Jordan controlled the West Bank. Last month, three people were put to death in the Hamas-ruled Gaza Strip; one of those cases involved the killing of a relative. Women’s organizations say severe punishment and laws that take seriously the killing of a female family member would suffice.