On Being Terrorized and “Terrorist” – The Feminist Wire

Home / Politics / On Being Terrorized and “Terrorist”

On Being Terrorized and “Terrorist”

I was born June 5, 1984 in Prince Edward Island (PEI). In Amritsar that day, Indira Gandhi ordered Indian troops to attack the Golden Temple.  Hundreds of Sikhs were killed.  State-sponsored genocide. Some 28 years later, August 5, 2012, Vivaan, my nephew, first great grandchild to my grandparents, is born in Connecticut. Simultaneously, a white supremacist kills six people in a gurudwara in Wisconsin. Racism. Sikhophobia. Islamophobia.

Not the same story, time, or place, yet similar pain, violence and hatred. Similar rage and grief. Here. And there. State-directed, like in Amritsar. Or state-sanctioned, like in Oak Creek.

For the state, some bodies are more disposable than others.  Always. This is violence.  Not random, exceptional, or senseless. Structural. Structural terror, which is un/real.  Worse, it’s near, and it’s ongoing. Moreover, it’s (in) life…and death.

It scares me to see that things don’t change, across temporalities and spatialities. Vivaan and I are born into the same spectres of violence and terror. I am not a Sikh or Muslim. But still, I’m brown. And, I am afraid. Apprehensive. Hurt. Despairing. Frightful. For myself.  And for him.  To be sure, I do not want to be any of these things.

As a racialized body on the stolen lands of Turtle Island, I’ve experienced racism and hatred through  friends, and collective experiences via communities of color.  Our bodies will always be racialized, othered, and strange here; sometimes even marked as “terrorists.”

Yet, I remain terrorized.

In India my body gets read as Hindu, even when I am not (practicing). This is a privilege, in some ways, of caste, class, and gender.

I have no control over how my body is perceived—whether here or there. But also, I have no control over my emotions, particularly when terror is all around me. It can hit (or shoot) me anytime and anywhere. I am vulnerable, and perhaps disposable. Un-eased. Unfortunately, this isn’t anything new. Violence isn’t a novel development. In fact, it’s normative and desensitizing.

Then why this piece, right? Not sure.  Perhaps because I feel rage and insecurity. Maybe because I am tired of the ordinariness of violence. Yet, I am complicit. I was initially irritated when I saw how connections between the genocide of Sikhs in India and the Wisconsin shootings in particular, and Sikhophobia in general, were being made. I found these parallels decontextualizing at best. However, I was wrong, not only because I am not Sikh, but also because of my own failed theorizations. Hatred, terror, and violence; along with fear, grief, and rage, can never be senseless or decontextualized.

And here I bring in critical theory. Because in times like these, it is the words of radical thinkers that often help us make sense of various situations. Other than obviously the love of near and dear ones, and the strength and passion of strangers, I use theory to ‘heal’ and ‘connect’—to emotions—to structures—to the horrors of violence—to struggles—to rage—and to love.

When (and how) terrorism becomes normalized, it doesn’t matter who the “terrorist” is or who is terrorized. Terrorism is not an event, it’s a structure—a structure that enables, and is enabled by violence and oppressions through interlocked and overlapping structures of hetero-patriarchy, racism, white supremacy, capitalism, and colonialism. So it doesn’t matter if you are racialized/or not, gendered/or not, queered/or not, classed/or not, casted/or not, abled/or not, religious/or not, politicized/or not, somethinged/or not. We are all affected by terrorism and violence, albeit in different ways.

As Franz Fanon and Aimé Césaire have so reminded us, colonialism leaves neither the colonized nor the colonizer untouched. Césaire writes:

Colonization works to decivilize the colonizer, to brutalize him in the true sense of the word, to degrade him, to awaken him to buried instincts, to covetousness, violence, race hatred, and moral relativism… (Discourse on Colonialism, 35).

Bodies matter, especially if of color, a woman, queer, or differently abled. Whiteness matters. There is always an ‘Other’—the target of hate and the “stranger than other others” who, in the words of Sara Ahmed, is not only a “stranger” but a “stranger danger” (Strange Encounters 3-6). It is important to note that the “stranger” is not inherently a “danger.” It is through structures of ignorance, hatred, and terrorism that society creates (or imagines) the idea of “danger.”  This is the real terror; that which makes the stranger always a target of “danger” and that which makes the “terrorist,” who is also terrorized.

In “’Heteropatriarchy and the Three Pillars of White Supremacy: Rethinking Women of Color Organizing,” Andrea Smith writes about the three pillars of white supremacy: slavery/capitalism, genocide/colonialism, and orientalism/war. Slavery/capitalism logic renders Black and diasporic people inherently enslaveable through capitalist logics of labour exploitation; genocide/colonialism logic suggests that Indigenous peoples have all died and their lands and resources can be occupied by non-indigenous peoples; and the logics of Orientalism/war renders some racialized peoples forever foreign and threats to the nation, for example, Muslims, and increasingly, Sikhs.

According to Smith, while all people of colour may be victimized through one logic of white supremacy or other, (and made to be the “danger”), they also become complicit in other logics.  This notion of simultaneous victimization and complicity is a useful tool for thinking about overlapping structures of oppression and privileges.  Yet, it also reminds us how all people of color are both misread as “dangerous” and “in danger.”  These designations, along with the reality of being predetermined as a “terrorist” and  terrorized,  reveal numerous ironies, fallacies, and contradictions in the life-world, particularly with regard to “our civilization,” which Césaire has already told us is failed, decadent, stricken, and dying (31).

Knowing how communities of color are always at risk of being misread as dangerous and terrorists is not emotionally, culturally, or socially uplifting.  Nevertheless, it provides us with a space to learn and, perhaps, to decolonize. Such acknowledgement of the potential of a decolonizing moment may lead to realizing one’s privilege—as a loss. Gayatri Spivak argues that privileges prevent one from gaining certain kinds of Other knowledge(s): not knowledge that one has not received but knowledge that one is not equipped to understand by the reason of one’s social positions. By learning to speak to historically (and indeed structurally) “silent” others, one can potentially systematically unlearn her/his own privileges. That is, part of the unlearning process is “to articulate the ideological formation – by measuring silences, if necessary – into the object of investigation” (“Can the Subaltern Speak?” 92). However, silences and un-silences are everywhere and anywhere—within the margins and outside the margins. So, in and through our struggles, oppressions, privileges, and complicities, we have to be careful while unlearning, undoing and unmaking our oppressive positionalities.

But, at the same time, I am a little bit troubled by this discourse, that we keep pointing to the fact that Sikhs aren’t Muslims, but we forget to say that even if this happened to Muslims, that wouldn’t be OK and we would stand up against that. And it’s this mosque burning in Joplin that occurred yesterday, it’s very similar to what we saw in Wisconsin, but, for some reason, it’s not receiving the same sort of media attention and that’s very troubling to me. (Democracy Now)

Undoing is not just moving on. It is a space and opportunity for broader (decolonized) empathies, alliances, and solidarities, and of unknowing and unbecoming the terrorized and the “terrorist.’”

I wish to think that in another 28 years Vivaan’s generation will have some solutions. However, history tells us that they won’t. Yet, I remain hopeful. Scared. Yet hopeful nonetheless. While terror is still real, terrorizing the “terrorist” could be made unreal. Undone. Decolonized. Here. And there. In me. And you. To think, perhaps rethink. And feel, and re-feel. With love. Solidarity. And justice.

Authors note: I wish to dedicate this article to my friends, Kamal Arora and Shaista Patel, for it is their strength and fierceness that inspired me to write it. I also want to say many thanks to Deepa Rajkumar as I now write in deepa. 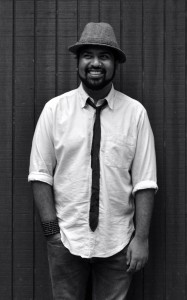 Author Bio: Nishant Upadhyay is a doctoral student in Social and Political Thought at York University, Toronto. His research involves looking at relationships between Indigenous and immigrant communities within the settler colonial context of Canada. He teaches in South Asian Studies at York.