Meditations on African performance and subjectivity are always already spoken by this grammar and haunted by these ghosts. For whatever ‘Africa’ means when spoken by Africans, whatever it means in the moment of performance, that cannot change Africa’s paradigmatic relation to other place-names and the people of those places. Performance cannot reconcile this gap between the place of slaves and the places of all others.—Frank B. Wilderson III, “Grammar and Ghosts”

All the world’s a stage.—William Shakespeare, As You Like It 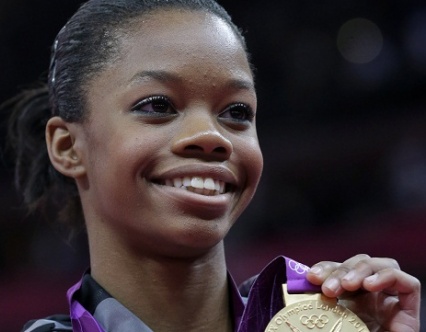 In search of updates in news coverage of the Olympics (medal counts, events I enjoy and/or missed, etc.), I type “yahoo” into the task bar and press enter. The page loads. Various headlines cycle across the screen. Skimming them all, I am detached. And there it is: this picture of Gabby Douglas, smiling, a gold medal around her neck, pride so evident on her face.

I envision the waiting embrace of her parents, the tears of joy, and the uncontainable exuberance of all. The headline reads “America’s New Sweetheart.”  However, as I encounter the electronic text, uneasiness boils within me. I recall the negativity of the coverage surrounding her, her appearance, and her performance. And in my mind, the image of her smile warps, a shadow falls over it, haunting; the medal morphs, gilded circle become gilded chain become golden noose. I feel dizzy in my love seat, vertigo.

We all must praise Gabby Douglas for her brilliance. But let us not misunderstand the status of blackness as blacks perform it on the world’s stage: black performance does not belong to blacks.

So when black flesh so gracefully performs in whatever venue, on whatever stage, no matter with all the skill and talent in the world, its license belongs to, structures, and is structured by the anti-black world. We cannot claim Gabby Douglas because she never belonged to us—rather, she never belonged to ‘us,’ and there is no ‘us,’ insofar as we can only conceive of these two identities within the semiotics mapped by this world. But if we understand ‘us’ as the negative reflection or inverse of (the possibility of) collective or communal being—since to be black is, to the world, to be the necessary, phobogenic (i.e. induced or generated by fear) antithesis to being—and if ‘we’ understand her and her black performance as always already structured by and within the limits of an anti-black world, then ‘we’ might better approach an understanding of what is at stake in every graceful gesture on the balance beam, bars, or floor, or of how the air shifts from the flare to the roar and the applause.

We begin with a question: What happens to the energy radiating from Gabby Douglas’s calculated and beautiful movement, her smile, her charm, and her joy as it moves through the universe, vibrating the very strings of reality as the millions watching, reading, blogging, tweeting, and talking experience it?

The media coverage of the games provides part of the answer, generating critiques about her character—expressing hopes that she will provide a consistent performance, with a worried or disdainful timbre—her ability (which was, and, unsurprisingly will remain, in question), her family—”where is her father?” they ask, timbre condescending, expectant; “who was the real parent?” they ask, same timbre with a hint of worry and wonder, in a challenge directed at her mother. It expresses in focusing their attention on the shortcomings of their golden child, Jordyn Wieber, or on the ability of Gabby’s teammates to ‘reel her in’—which means they, representative of non-blackness, set the limits in which her greatness emerges (nullifying the credit due Gabby). And it follows her gold medal performance with Bob Costas asserting, concerning African-Americans, that “the barriers have long since been down, but sometimes there can be an imaginary barrier, based on…oneself,” over which Gabby triumphed.

The blogosphere and twitterverse, exploding with hyperbole in both directions, chastise her for her appearance, claiming her hair need be ‘done’—which, in an anti-black world, even when blacks drive the unnecessary criticism, means “fits the standards of white/non-black beauty”—or, to them, how insignificant her performance is historically, or, in the extreme instance, something something nigger something something gold something something…and so on. All this to reaffirm the structural anti-blackness that at once obligates and erases her (and her blackness) from her achievements.

So this first shift, which led to the team gold medal, met almost absolute negativity of the above, in the media’s Olympics coverage, and in the social media spheres of numerous blacks. But the second shift in the air, when Gabby wins the All-Around gold medal and historically cements her Olympic achievements, moves the energy—the same energy, mind you—differently. She becomes America’s New Sweetheart, everything spoken in a different timbre—appreciative, joyous, warm—the semiotics expressed in a different register. But make no mistake: this discourse is no less violent than the first; arguably, it achieves a higher and more horrifying degree of violence because under the cover of positivity and warmth, America affirms and tightens the grip of its anti-black iron fist on her black flesh. America owns her. She belongs to it, and every one of her achievements, her words, and her smile, it openly claims for itself.

When in the first, negative instance she is inversely embraced by the structure as its outside through criticism and chastisement, in the second, positive instance, America qua the world embraces her openly in its structure, not as a member, but as performative corporal property. In both, the grammar is the same, the status of the black remains, and the world affirms itself through yet more black flesh; and now, in the second, the violence smiles in ‘our’ faces and mistakes ‘our’ applause as moving the same air the same way as its own.

She smiles back. She charms. This is not power, or a show thereof. Whatever she says or does exemplifies, with much higher magnitude, at a sharper trajectory, the vector of blackness performed on an anti-black world stage. The energy will transfer to the white—correction non-black—gaze, which will channel it, alter it, to meet the requirements and fit within the limits of the world in which they believe, for which they are. It is a haunting spectacle, to see her beautiful performance on replay, to see her smile, to hear her voice and the joy in it all, knowing the stage, the audience, and the director(s); rather, it is a haunted spectacle, every gesture shadowed and warped by the grammar and ghosts (pace Wilderson) of that anti-black stage, that audience, those directors.

Such are the parameters of the world situated in the afterlife of slavery. As Saidiya Hartman puts it so simply and eloquently in Lose Your Mother: A Journey Along the Atlantic Slave Route:

Slavery had established a measure of man and a ranking of life and worth that has yet to be undone. If slavery persists as an issue in the political life of black America, it is not because of an antiquarian obsession with bygone day or the burden of a too-long memory, but because black lives are still imperiled and devalued by a racial calculus and a political arithmetic that were entrenched centuries ago. (Hartman, 6)

Essentially, for the slave, for the black that remains a slave of a different name, slavery warped space and time: instead of a context, ‘we’ occupy an anti-context, which is to say the world’s context (its space and time) ruptured, distended, inverted. So while the world, in a superficial sense, has transformed and progressed, the status of the black, positioned outside of it, or as its inverse, or as its negative reflection, remains because that racial calculus and political arithmetic continue to structure it.

And the slave, to take seriously Orlando Patterson’s concept, is socially dead. Social death, from his piece, Slavery and Social Death: A Comparative Study, consists of three basic elements: 1) total powerlessness; 2) natal alienation, the loss of genealogical ties extending both to forward and backward generations; and 3) generalized dishonor, which is a direct effect from the first two. Together, the notion of a distended temporal-spatiality and a negative (and phobogenic) status, provide a glimpse into the grammar and a silhouette for the ghosts that structure black being in (or outside) the world today. Gabby Douglas, like all of ‘us,’ remains a slave of a different name, with a different, albeit gilded, chain.

She is a 16-year-old magnificent gymnastics dynamo of such caliber and talent ‘we’ can only hope to see again from ‘our community,’ and will be included in the legacy of athletes, black athletes, who defy expectation, smile in the face of an anti-black world, and show it up every step of the way—the kind that the world will seek to claim as its own, as its product and as its property. ‘We’ must meet her brilliance and joy with the same, channel that energy, and amplify it. For if ‘we’ live life only in social death (pace Sexton), if ‘we’ are the (real) walking dead of the earth, if ‘we’ are a zombified community united only by that negative designation, then who do ‘we’ have but ourselves? Put differently, in a world where ‘our’ claims on cultural production, membership, and identity never belong to ‘us,’ a world for which we occupy its constitutive outside, what is here, in this outside, but the knowledge that ‘we’ are here, outside, underground, or in outer space—that ‘we’ are, here?

This is no simple question, but the trajectory on which it sets ‘us’ seems to suggest that ‘we’ must understand the here-ness, the anti-context, of blackness and blacks, in this case Gabby Douglas, and the talent and prowess of her performance. Perhaps that is how ‘we’ claim her; here, she is always one of ‘us,’ one of the walking (flipping, swinging, flaring, calculating, smiling) dead, always ‘ours.’ Here, with and to ‘us,’ her smile is a smile, and the gold medal signifies an achievement unlike any other; both threaten to throw the world into crisis. There, the smile is black flesh on display, bought and sold; there, the medal, a gilded shackle. It is no wonder why the headline reads as it does, “America’s New Sweetheart,” Gabby smiling with her gold medal around her neck; the world wants—needs her. Conversely, it is no wonder why we must claim every opportunity to horrify the world by embracing the brilliance of black performance.

To be clear, the performative gestures in and of themselves cannot be overestimated as being liberating. Rather, ‘we’ might best conceive of the beauty of black performance writ large, of all the black Olympians, and of Gabby Douglas in particular, as graceful and awesome displays of the chaos that might, at its heart, provide glimpses into what shattering the world looks or will look like or, at least, the beauty there is in it.

It’s all very peculiar (pace Du Bois). Whatever is revealed in the chaos of Gabby Douglas, the beauty is undeniable, and it is, or can be considered, ‘ours,’ only here, beyond the mystification of ceremony, where ‘we’ know the truth. She might be “America’s New Sweetheart,” and, and but, she might also be a motivation, or vehicle, for destruction. In that, she is truly amazing. 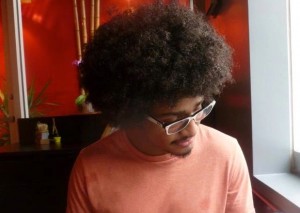