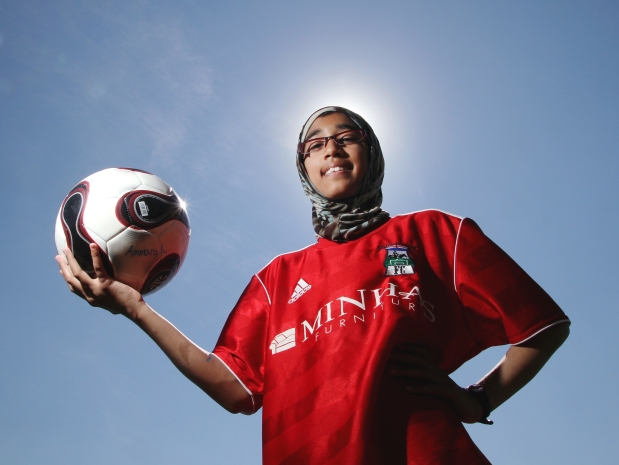 FIFA, the international governing body of soccer, has agreed tooverturn its controversial ban on the wearing of hijabs during games. The organization instituted the regulation in 2007, as the formal rules of the sportprohibit equipment that make a religious statement or pose a danger to players.

Referring to the garb as “headscarves” rather than “hijabs” in order to escape accusations of religious discriminationand highlight physical safety concerns, the deciding panel approved the reversal after the organization’s medical committee approved two scarf designs that do not compromise player safety. Presented by FIFA vice president,Prince Ali Bin al Hussein, who led a year-long campaign for reversal of the ban, the sport-safe scarves use Velcro fasteners and magnets. Other sports, including rugby and taekwondo, already allow women to wear hijabs during competition.

The repeal was greeted with mixed reviews. The French Football Federation rejected the ruling, stating that it intends to, “respect the constitutional and legislative principles of secularism” in France, the first state to publicly outlaw the hijab.

Qatar (slated to be the host country for the 2022 FIFA World Cup), Iran and Kuwait, among other countries, expressed relief at the revision. The United Nations, which also supported the campaign to overturn the ban, described equal access to soccer for all women as an imperative to demonstrate the range of possibilities for women who wear the hijab.

FIFA banned the Iranian women’s national team from competing in a qualifying match for the London Olympics last year because of their hijabs. The team designed special scarves that wrapped tightly around their heads, but FIFA wouldn’t budge. The ban specifically disadvantages women in both Iran and Saudi Arabia, where they are required by law to cover their heads.

Removing one’s headscarf is, for many, a demand that conflicts with personal conviction, not necessarily an imposed religious constraint. Though the international presence of the hijab has come to symbolize women’s oppression and limited personal freedom, banning the hijab is a more invasive, deep-reaching policy than its surface prohibition.