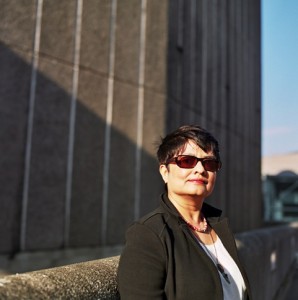 Filmmaker Pratibha Parmar has an exemplary track record for her passionate commitment to making films with integrity and illuminating untold stories with visual flair and imagination. A writer, director, and producer, her award-winning work has been widely exhibited at international film festivals and broadcast globally. Pratibha’s dedication in bringing complex subjects into mainstream media has helped change the contours of popular discourse on race, feminism, sexuality, and creativity.

Pratibha’s credits include A Place of Rage, a documentary film on African-American women and the civil rights movement featuring Angela Davis and June Jordan. The film received international critical acclaim and was named Best Historical Documentary at the National Black Programming Consortium in the U.S. In 1993, Pratibha released her most challenging film, Warrior Marks, which documented female genital mutilation at a time when the subject was taboo globally. This award-winning documentary was made in collaboration with the Pulitzer Prize-winning novelist Alice Walker. Parmar and Walker collaborated on the book Warrior Marks: Female Genital Mutilation and the Sexual Blinding of Women, which documented the making of the film (Jonathan Cape UK, Harcourt Brace US). Pratibha is currently in production with a feature documentary, Alice Walker: Beauty In Truth. Pratibha’s multi-award winning narrative feature film debut starring Shelley Conn and Laura Fraser, Nina’s Heavenly Delights, was released theatrically in the UK and US in 2006/7 and nominated for a GLAAD Award.

Author and editor of several books, Pratibha was awarded The Visionary Award for her body of work from the One in Ten Film Festival in October 2007 and is a past winner of the Frameline Film Festival Life Time Achievement Award.

TFW:  Could you respond to one or more of the following: What are your thoughts on the plight of women filmmakers in a male-dominated industry? Could you say a bit about feminist approaches taken up in filmmaking or filmmaking as art and a modality for social change? What is your process?

Pratibha:  Women filmmakers flourish despite the ubiquitous challenges posed by lack of financial and visionary support for our work. Women’s lack of access to capital in general plays a part, but just as worrying is that women are still perceived on some fundamental level to be followers rather than leaders. Just consider some startling statistics: only 7% of directors, 13% of writers, and 20% of producers are female. Given the dearth of female representation in front of and behind the camera, is it any wonder that we continue to have to struggle to get funding for female stories and voices?

There has been an overall shift in recent years towards even more aggressive and strident conservative, right wing thinking, so films that don’t fit the heteronormative, retrogressive lens are precious jewels that are continuously being sculpted by women filmmakers globally. And many of us continue to bend the universe to get our cinematic visions out into the world.

I came to filmmaking as an anti-racist, feminist activist. I was motivated by a desire to see stories, faces, and experiences of ‘marginalized’ peoples on mainstream television, and over the years my body of work has continued to centralize diverse LGBT stories and feminist explorations of our histories. Years ago I read a statement by Toni Morrison where she said, “I write the books I want to read”; similarly, I make the films I want to see.

I have seen how some of my films have had direct impact on people’s lives. For instance the film Warrior Marks, which I made with Alice Walker about female genital cutting, brought this human rights issue out into the open so much so that despite the controversy around it, we saw how international organizations changed their policies of ‘hands off’ to working on the ground with African women’s groups and supporting them in their work to eliminate FGC. One of my first films was Khush, about South Asian lesbians and gay men, made at a time when there was nothing that affirmed us or that made us visible in the world. It was a hugely empowering film for many of us who had not come out before to our families and for many who had been living in isolation, finding each other through that film.

So I continue to make work that I hope inspires and empowers us to create ripples of change whether in consciousness or policy or in our communities.