One Tough Mother – The Feminist Wire

In 1977, I won my elementary school’s spelling bee, sending me to the regional match where, after several rounds, I was defeated by the word jaundice. I was eleven years old, an exacting, bright, precocious little Virgo. In a local newspaper article about my achievement, I was quoted as saying, “I’m a big fan of Women’s Lib”—proof that my feminism started even before my period did.

Many years later, after my girlhood “women’s lib” had morphed into a full-fledged feminist commitment in work, politics, and life, my mom, Patricia Struck, one day remarked, somewhat apropos of nothing, “I really can’t imagine how you became a feminist.” Amazingly, my head didn’t spin around like Linda Blair’s in The Exorcist, so shocked was I by this statement. But my mouth did form an “O” of surprise and I struggled to find an answer that would fully capture my mother’s role in shaping my feminism. Finally, I uttered something like, “Are you freaking kidding me?”

Not very helpful, I know.

Mom and I have since had many conversations about feminism—hers and mine—and she’s also read much of my work (although not the really boring journal articles because even the best mothers wouldn’t go that far). I’ve had the chance to explain more fully to her just how I—a working-class, boy-crazy, Midwestern girl who rode dirt bikes and read Judy Blume and Archie comics—became a feminist force with whom to be reckoned. At least, I like to think of myself as a kind of feminist superheroine clad in an emerald velvet cape, heavy boots, and a megaphone, capable of leaping over tall patriarchs and smashing isms with my bare hands.

But I’ve never put into words, in a cohesive and systematic way, just how influential my mom was to the development of my feminist consciousness. So for this Mother’s Day, I decided to do so. My mother can be as exasperating as the next mom (for example, my sister and I could do without Mom’s classic phrase, “Well, what did you think would happen?”), but she’s also pretty damn terrific. I wouldn’t be here today—physically, intellectually, existentially—without her. 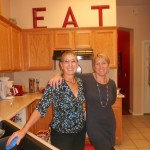 I’m a feminist because:

You were married at age sixteen and a mother of two before you were twenty.

You had the courage and wits to leave a threatening marriage and to take us with you.

You earned your GED and took some college classes while working and raising your young daughters.

You made sure there was food on the table, always, even though I hated those canned potatoes.

You surrounded us with community on Hamlin Street, at St. Luke’s, and in Wisconsin.

You married the world’s greatest stepdad and have proven that some marriages do last.

You became a competitive bodybuilder in your forties, with some mighty impressive guns and delts.

You got tired of not earning enough in the office, so became a steelworker on Chicago’s South Side, one of only a handful of women out on the floor pushing metal.

When I said, “I’m going to the University of Chicago” as a first-generation college student with a partial scholarship—even though Marquette had given me a full ride—you said, “Okay” and wrote some checks.

When I was nineteen, unexpectedly pregnant, and not at all ready to be a parent, you held my hand, wiped my tears, and said, “Which Planned Parenthood?”

You taught me that people are people, no matter their race, ethnicity, religion, economic status, age, or marital status. And when my world became more peopled with LGBTQ friends and allies, you said, “Okay” and held out your arms.

When I was 35 years old and declared “I’m going to give up my tenure-track job, move to an island in Puget Sound, and raise my daughters,” you said, “Uh, okay.”  (But you secretly worried, I know.)

You are a wonderful grandmother, even if you don’t live just down the block.

You, too, have become a feminist, and it warmed my heart when you shared Half the Sky with your teenage neighbor.

You swear even more than I do.

I land on my feet, almost always, because you landed on yours.

Related ItemsEducationFamilyHistoryMother's DayPatricia A. StruckU.S.
← Previous Story For Vijay
Next Story → From "A Magic of Bags"