Elections Around the World – The Feminist Wire

Home / Culture / Elections Around the World

Elections Around the World 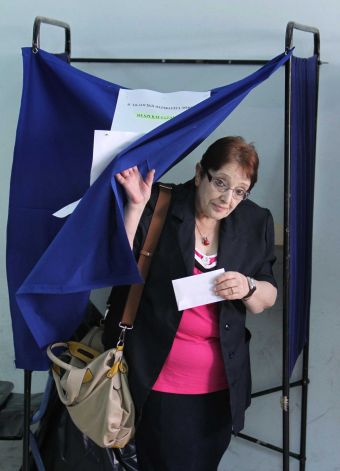 Leader of the Greek Communist Party, Aleka Papariga, votes at a polling station in Athens on Sunday, May 6, 2012. Photo credit: Thanassis Stavrakis / AP

Elections are happening all over the world, with some countries demanding changes from their governments while dictators in other nations reassert their control and power. Here are some of the stories:

France: François Hollande, the president-elect of France, represents the Social Party. He has led the Party for more than 11 years and became the likely candidate to lead the party after Dominic Strauss-Kahn was arrested in May 2011 for the alleged rape of a hotel maid in New York City. Hollande has been criticized for declining to spell exactly what his economic policies will be, although he has pledged to increase taxes on the rich, boost social spending and create thousands of state jobs. He has also vowed to renegotiate the eurozone fiscal agreement, but analysts said Hollande will likely be a pragmatic leader. Read more: CNN

Russia:  Vladimir Putin was inaugurated Monday to his third term as Russia’s president, extending the former KGB officer’s 12-year grip on power that most observers considered uninterrupted despite the past four years he served as prime minister. Dozens of protesters who tried to stand on the sidewalk and cry “shame” to the passing motorcade were detained, among them opposition leader Boris Nemtsov, who had been arrested during Sunday’s protests and fined 1,000 rubles before being released. Read more: LA Times

Greece: The majority of Greeks voted for parties that want to rip up the country’s bailout agreement with the EU and International Monetary Fund (IMF). The conservative New Democracy and socialist Pasok, which have led a pro-bailout coalition since last November and dominated Greek politics for almost four decades, haemorrhaged support to anti-austerity parties from the left and right. New Democracy still received 19% of the vote. The big winner of the day was the leftist anti-bailout coalition, Syriza. The other big shock is the virulently anti-immigrant Golden Dawn party. Labelled neo-Nazis, their leader was filmed making a Hitler salute on camera while members speaking of racial purity. The party received just 6.7% of the votes, but it is the largest amount of support they have received in any election. Antonis Samaras, the New Democracy leader, has now met the Greek president and has been given the task of forming the next government. He has up to three days to do so and says he is open to co-operation with various parties. Read more: BBC

Syria:Syrians cast ballots Monday in parliamentary elections billed by the regime as key to President Bashar Assad’s political reforms, but the opposition dismissed the vote as a sham meant to preserve his autocratic rule. The elections are the first under a new constitution, adopted three months ago. The charter for the first time allows the formation of political parties to compete with Assad’s ruling Baath party and limits the president to two seven-year terms. The parliament is not considered an influential body in Syria, where the real power is concentrated around Assad and a tight coterie of family and advisers. Experts say that despite the legal changes, Syria’s oppressive security services keep true regime opponents from participating in politics.  Election officials say more than 7,000 candidates are competing for seats in the legislature in a country of almost 15 million eligible voters out of a population of 24 million. It is unclear whether voting will be possible in regions of the country that were damaged and destroyed during Assad’s military crackdown. Read more: NPR

Note: If there is a country you’d like to see reported, please feel free the leave a comment & it will be researched and included.